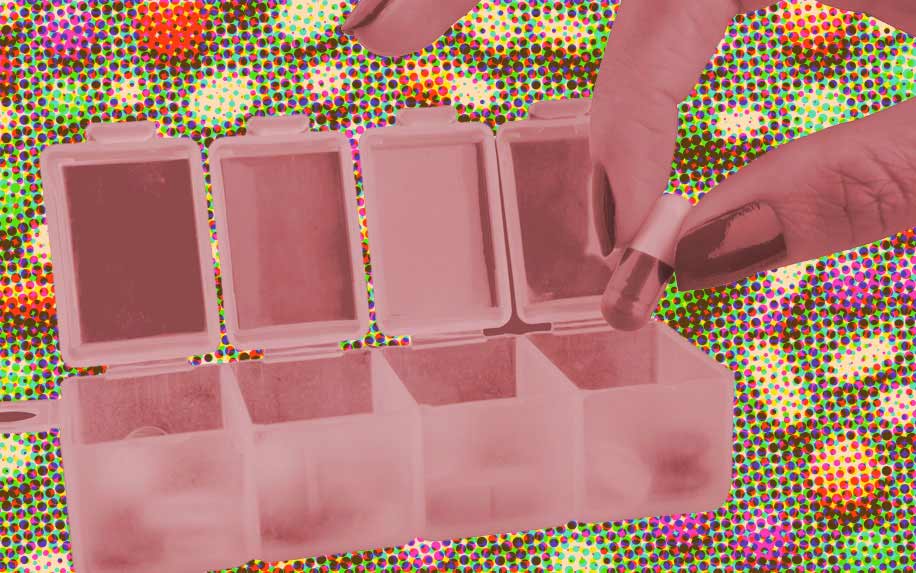 After prescription drugs robbed me of my health, cannabis helped me get it back. Image Credit: By Dragon Images & Pavel Kubarkov on cannabisMD.

The following is part of cannabisMD’s personal essay series on managing your health with cannabis. Do you have a positive (or negative) story to tell about your own cannabis health journey? We want to hear from you! Send your ideas to pitches@treesi3.sg-host.com.

I have been a nurse for almost 20 years, and this is the story of how cannabis saved my life.

In 2010, I fell seriously ill — for reasons that doctors were unable to understand, I began to experience excruciating pain, which hampered my mobility and caused intense mental distress. Their response was to prescribe a pill for every symptom I exhibited, and it didn’t take long for me to tire of the toll they were taking on me. Soon, I was barely surviving. I became so desperate that I was willing to move 2,000 miles from where I was born in hopes of finding something that would save my life. Today, I’m sharing this journey because I want people who are experiencing similar mental and physical pain to believe a better, healthier future is possible.

My Introduction to Prescription Drugs

I’d been in pain for a long, long time before I had my first surgery. This one was to remove my gallbladder. During the procedure, they found a large tumor on my liver that they deemed inoperable. It was an estrogen- and blood-filled mass, most likely caused by years of taking the birth control pill, which I’d used to regulate my intense menstrual cycle. Needless to say, this was an unexpected side effect.

A few weeks after the operation, I woke up and my entire body was puffy. The pain in my right side had only worsened, and the nausea was more unbearable than ever.

By this point, I was prescribed more than ten pharmaceutical medications, including Vicodin and morphine. I was only 29 years old and my life had become defined by when to take my next pill. Internally, I felt like a toxic waste dump. Because of chronic, unidentified pain in my right side, I’d been prescribed opiates and narcotics, which made me nauseous, and I also began having chronic headaches. To combat these side effects I was then prescribed various antiemetics, including Zofran and Phenergan. For the headaches, I was given prescription-strength, anti-inflammatory drugs like Relafen and Vioxx.

Then I had more tests done, after which it was decided that maybe I was having some sort of internal spasms, so doctors prescribed me antispasmodics, Robaxin and Baclofen. The anxiety that came with my lack of knowledge about what was wrong with me caused me to watch the clock to take my next Valium or Xanax. But the antianxiety meds felt like they increased my anxiety, and that led to depression from never feeling stable.

To deal with this issue, Celexa was prescribed first, followed by Zoloft, neither of which made me feel any better. I felt like I was slowly losing my mind — I just wanted to feel better.

After exhausting all my other options, I began using cannabis by illegally obtaining it in Florida. I quickly realized that as soon as I consumed it via smoking, my nausea disappeared. As a nurse, this floored me, because I was on two prescriptions for nausea and yet this plant made the awful feelings fade faster than any pill I had ever been given.

Before long, I realized I was going to die if I didn’t make a drastic change. All those pills were changing who I was, and I wasn’t getting any better. My mind turned to Colorado — my mother was there, and I knew the state had a medical marijuana program. In those moments of pain and desperation, cannabis was the only thing that made me feel any tinges of relief. I figured if I was going to remain sick — and possibly die — it was worth trying a change of scenery.

I made the decision to leave everything I loved behind: all of my belongings, my dog, my vehicle, everything. I even wrote my will. I said goodbye to the people I loved, because the tumor on my liver and the unexplained pain felt like they could kill me at any moment. I flew to Colorado with ashen grey skin and swollen limbs.

As soon as I arrived in Colorado, I went to a physician and received my medical marijuana card. I went to dispensaries and asked a million questions and tried every different strain and method of consumption possible. Edibles and tinctures began working wonders on my symptoms of pain and nausea, smoking began to ease my headaches, and the topicals I began making myself started healing my new surgical scars with exceptional speed.

The best part? I was experiencing all these benefits with no side effects.

I felt so good that I began working for a family-practice physician in a small town in Colorado. Mentally, I felt like I was finally regaining some control. However, my body unfortunately had other plans.

My menstrual cycle had been a problem since I was a teenager. In my early 20s, I was diagnosed with polycystic ovarian disease after several cysts burst in my fallopian tubes. I was then diagnosed with dysmenorrhea, and the pain became so intense that I would vomit or pass out. Doctors decided that I needed to have a total hysterectomy. But during the procedure an error was made — one that made my kidneys stop working. For the next six and a half months, I lived with a tube stuck into my kidneys, attached to a bag of urine on my thigh.

My depression and anxiety became overwhelming. I withered from my normal, healthy weight down to 98 pounds, and my stepdad requested a psychiatric evaluation during my hospitalization. I’d had so many surgeries and I was still sick — but I was tired of being a patient. When the doctors wanted to prescribe more pharmaceuticals, I refused them. I just wanted to take care of people again.

To combat the mental anguish, I went inside myself and gave myself permission to heal. I began to deeply study the cannabis plant and all its effects. I wanted to better understand the history of prohibition, my endocannabinoid system, and why this plant that had been kept from me my whole life was now the only thing providing me with true relief from my countless symptoms.

In just a few months, he transformation cannabis made in my body was remarkable — I now needed fewer and fewer opiates after surgeries, and before I knew it, the only prescription drugs left in my purse were for anxiety.

Thanks to cannabis, I felt well enough to move to Denver and begin a life as the new-and-improved me. A short while later, I had an appointment to meet a world renowned liver surgeon at the Porter Hospital. He took one look at my chart and said, “My goodness, if I wasn’t looking right at you I would have guessed you were a 65-year old man. What on earth has happened to you, young lady?”

I wondered the same thing.

The surgeon was willing to operate on my “inoperable” liver tumor, and in a seven-and-a-half hour operation, he successfully removed it from my body. When I woke up, I felt like a different person. A few days after the operation, I took my last opiate, and I haven’t looked back.

I don’t want my story to suggest there isn’t a time and place for prescription drugs — obviously there are times when pharmaceuticals are necessary — but, as I’ve seen firsthand, there are also times that physicians prescribe them because they don’t know what else to do. Sometimes, they’re genuinely trying to treat a symptom — without remembering that the goal should be to treat the cause. Unfortunately, Western medicine often misses the mark here.

That’s why you have to listen to yourself and be relentless in the pursuit of your health. For five years, I’ve been completely free of pharmaceuticals. I’ve felt what the side effects can do, and it’s why I now solely rely on cannabis and plant medicine. I’m also studying herbalism to have a better understanding of all the plants that I took during my recoveries from surgeries. Today, I feel better than I ever have in my life.

At last, I’m thriving — and I have a message for you.

Maybe you’re one of the millions of people that suffer from pain, chronic or acute. Maybe you’re living with depression or anxiety. Maybe you’re fed up with pharmaceuticals, and you’re beginning to ask questions about cannabis and plant medicine. If this is you, my best advice is to trust yourself, do your research, and remain diligent in your pursuit for answers. You’re on to something, and if you continue to explore the world of cannabis and plant medicine, you may be amazed by what you find.

You can feel better. A brighter and healthier future is possible.