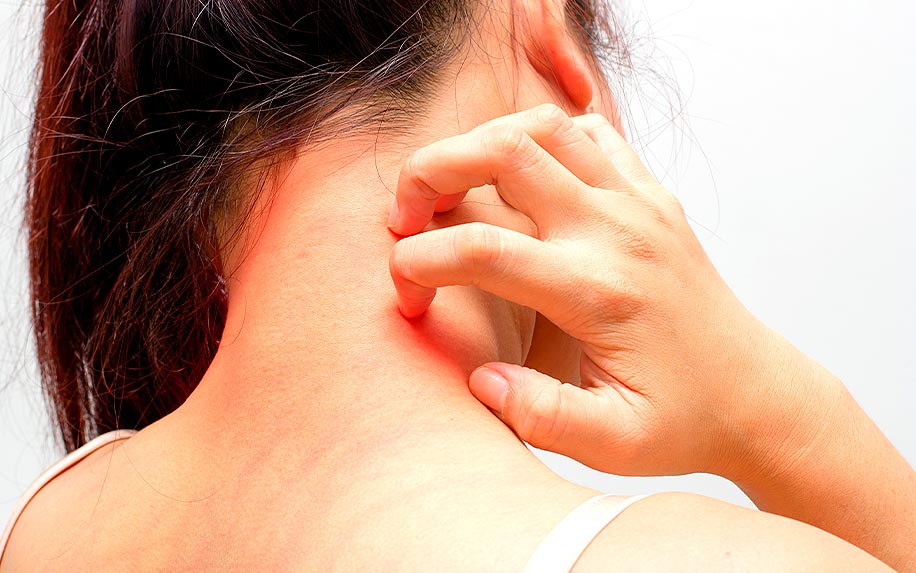 Atopic dermatitis is actually a severe form of eczema. Image Credit: By namtipStudio

If you’re living with atopic dermatitis, you probably don’t need to be told what a (literal) pain it can be. Aside from the physical symptoms like red, dry, and itchy skin, many people struggle with the condition’s psychological side as well. The impact on self-esteem can be significant: It’s not uncommon for people to change the way they dress or even cancel plans with friends, especially during a flare-up. Obviously, this is less than ideal — and it might explain why a growing number of people are curious if cannabis topicals could offer relief.

But first, what exactly is atopic dermatitis? If you’re thinking, “It sounds a lot like eczema,” you’re right. In fact, atopic dermatitis is actually a severe form of eczema, and it’s also the most common one. According to the National Eczema Association (NEA), atopic dermatitis affects an estimated 18 million Americans today. Scientists aren’t quite sure what causes it, though genes and environmental factors are believed to play key roles. For many people, the condition begins during infancy and continues to adulthood. That’s a long time to feel uncomfortable in your own skin.

Why Cannabis Topicals Could Be an Appealing Treatment for Atopic Dermatitis

There’s no cure for atopic dermatitis, but there are a wide array of treatments. These include prescription topical medications, phototherapy (which involves exposing the skin to UV light), and immunosuppressants (drugs that suppress the immune system). Some people with severe atopic dermatitis even use steroids to treat it, though this isn’t recommended by the NEA.

Since many of the conventional treatments currently used to treat atopic dermatitis come with significant downsides, there’s growing interest in cannabis topicals as an alternative solution. So far, the research is promising:

Itchiness is one of the main symptoms of atopic dermatitis, and it can also be one of the most problematic. Excessive itching can damage the skin and lead to infections; it can also make sleeping difficult or impossible. Over an extended period of time, it can even make the skin leathery and discolored.

In a 2017 review titled “The Role of Cannabinoids in Dermatology,” researchers from the University of Colorado Anschutz Medical Campus found that “[perhaps] the most promising role for cannabinoids is in the treatment of itch.” In multiple studies with human patients, cannabinoid-rich topicals proved highly effective in reducing itchiness without causing major side effects.

Cannabis Could Relieve Skin Inflammation
Inflammation of the skin is a major problem for people with atopic dermatitis. It’s caused in part by mast cells, which release inflammatory compounds when activated. According to a 2016 study in the journal Annals of Dermatology, cannabinoids (specifically, THC) can inhibit the activation of mast cells by acting on CB1 receptors of the endocannabinoid system.

However, THC isn’t the only cannabinoid that has proven useful in reducing skin inflammation. A 2019 study from Italian researchers sought to determine if CBD ointments without THC could be an effective treatment for people with inflammatory skin diseases, including atopic dermatitis. Their findings? CBD topicals could be a “safe and effective non-invasive alternative for improve [sic] the quality of life in patients.”

No two cases of atopic dermatitis are exactly alike, and as a result, neither are their treatment strategies. People have different triggers — which can include everything from sweat to stress to dust to detergents — and their conditions can present with different levels of severity. For some, atopic dermatitis is an annoying inconvenience, while for others it can drastically affect their quality of life.

Regardless of your personal circumstances, though, a few general rules hold true for treating atopic dermatitis with cannabis topicals:

Choose a Product That’s Pure and Gentle as Possible

According to the Mayo Clinic, harsh dyes and fragrances can trigger flare-ups of atopic dermatitis. That’s why it’s important to choose a product that’s free of artificial chemicals, which can minimize your exposure to allergens and other triggers.

You should also keep an eye out for ingredients like menthol and camphor. While these compounds are widely used in topical products (largely for cooling relief in the case of menthol, and itch relief in the case of camphor), they can be a risky proposition for people with atopic dermatitis. For example, applying products with camphor to a heavily-scratched area of skin can make the body absorb toxic levels of the compound, while menthol can cause irritation or even chemical burns for people with sensitive skin.

Make Sure It’s Been Lab-Tested

This is especially important if you’re considering a CBD topical like a balm or cream. Because the CBD market is still currently unregulated, there’s no federal oversight of the products you’ll find on store shelves. Studies have shown that many CBD brands are prone to dubious claims, and you can’t always trust what’s on the label.

That’s why a third-party lab test is so crucial for ensuring you’re getting what you paid for. Not only will it give you detailed information on the product’s content of cannabinoids and terpenes — be especially careful about the latter, since some people have skin reactions to certain terpenes — but it can also help you avoid >products contaminated with pesticides or heavy metals. Needless to say, those are the last things you want to rub into your skin when you’re already dealing with atopic dermatitis.

Apply It As Needed (But Not Too Often)

Once you’ve found a product that meets your needs, your next question is probably, “How often should I apply it? And how much should I use?”

Unfortunately, there are no hard-and-fast answers to these questions. However, if you’re using a quality cannabis topical, you should be fine with applying it twice a day at least. Follow the application instructions, and ask your dermatologist if you have specific questions about dosage.

If your skin seems to be responding well to the treatment, you can try applying it more frequently throughout the day. However, if you notice any irritation or discomfort, it’s best to stop using the product and (again) talk to your dermatologist.

The Bottom Line on Atopic Dermatitis and Cannabis Topicals

Atopic dermatitis is a complex (and often frustrating) condition, and cannabis topicals may not be a silver bullet for everyone. However, the science behind them is encouraging — and in my professional experience, I’ve found that they can be a real game-changer for people living with the condition.

As part of my Primal Healing practice in Colorado, I teach a class called Cannabis Massage 101, where students learn to use cannabis topicals together with time-honored massage techniques. As part of the class, each student is given a jar of our salve so they can experience for themselves what plant medicine feels like.

Recently, one of our students (we’ll call her Jill) came to class looking quite upset. Her atopic dermatitis was flaring up, just as it had for many years. As she was leaving, I quietly suggested she try the cannabis salve to see if it helped with her symptoms. Day by day, she began to see a steady improvement. By the end of the week she was sending me messages of gratitude and surprise — the inflammation and itchiness she’d experienced the majority of her life was gone.

Does that mean everyone with atopic dermatitis should start stocking up on cannabis topicals? I’m not sure I’d go that far. But if you’ve been struggling for years to find relief, why not give cannabis plant medicine a try?