The Argument Against: Cannabis Cryptocurrency 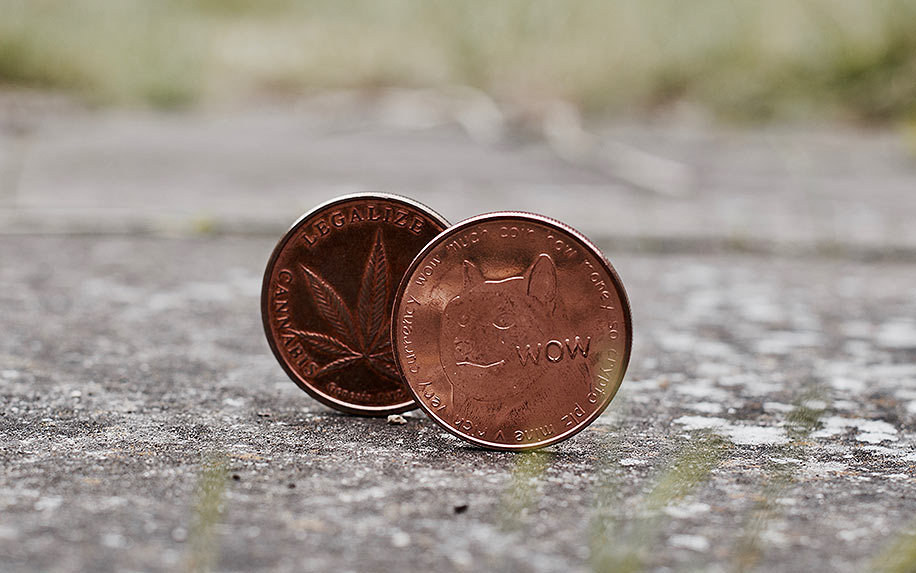 Cannabis and cryptocurrency are both popular business trends — but that doesn’t mean they mix. Image Credit: By Adrian Today on shutterstock.

In the unbanked cannabis space, cryptocurrency has long seemed like a natural fit, but attempts at tying a cryptocoin to the industry have never quite worked. Now a Greek billionaire is the latest to launch a cannabis-based coin, the SWX Coin — which he’s trying to position as the default currency for the cannabis world.

The Greek billionaire is Alkiviades David, and his company Swissx is already a big name in the CBD world. Swissx specializes in high-CBD, low-THC strains that comply with hemp-sourced CBD laws in Switzerland and the U.S. Swissx was the first CBD company to distribute at Coachella (via drone), and is represented by celebrities like Mike Tyson, Scott Disick of “Keeping Up With the Kardashians,” Snoop Dogg, Lil Wayne, Tommy Chong, and Donatella Versace.

Swissx aims to pay hemp farmers in its Swissx Global Hemp Exchange using SWX Coins, which are redeemable for cash at its new Swissx Bank of Cannabis. The bank launched with the backing of $250 million in Swiss francs and $750 million worth of cannabis seeds. The Swissx Global Hemp Exchange, a hybrid trade commission-agricultural authority that intends to govern the whole world of hemp, is also in the offing.

In a press release, David said, “First we changed the game for CBD products, then we created tremendous opportunity for farmers and their regional economies throughout the Caribbean. Now we’ve used Swiss financial know-how to create the first bank and cryptocurrency entirely optimized for the legal cannabis industry.” He also articulated an ambitious vision for the project that, if realized, would have a massive impact on the global economy.

As David said, “The Swissx Global Exchange will be an authoritative resource for the entire industry, better than Nielsen, bigger than Nasdaq. Together, the bank and currency and exchange don’t just insure Swissx’s international operations run perfectly, [but that] it will become the engine for the fastest growing business sector in the world.”

For an industry which craves vertical integration, Swissx’s crypto plan might seem like a move in the right direction. But is it really? It’s been tried before, and never with much success.

The Problems With Cannabis Cryptocurrency

Every argument for cannabis cryptocurrency starts out with an explanation of the cannabis industry’s banking problems. Even dispensaries in legal states can’t rely on a traditional financial infrastructure of bank accounts and credit cards, as federal prohibition would put them at risk of censure (or worse). So for the most part, cannabis transactions are conducted in cash, which creates inconvenient situations like having to hire armored cars and guards to transport tax payments across the state.

Additionally, the blockchain database software that cryptos run on would make the industry’s fabled seed-to-sale tracking target a practical possibility.

The first coin came in 2014 with the launch of Potcoin, a cryptocurrency with a total supply of 420 million coins, each of which currently weighs in at a value of $0.0075. Despite enlisting avatars of propriety like Dennis Rodman and Charlie Sheen (cryptocurrency struggles with legitimacy at the best of times), it’s still failed to make much of a mark in the industry.

Another company called Paragon took things a step further and attempted to create its own infrastructure, with a cryptocurrency called ParagonCoin and a cannabis-friendly coworking space called ParagonSpace — and an in-house PR team spearheaded by its celebrity founder, Jessica VerSteeg of beauty contest (Miss Iowa 2014) and reality TV show (“The Amazing Race”) fame. However, this plan also failed to pan out.

When the SEC slapped Paragon’s initial coin offering with a fine of $250,000 for not registering the token as a security, Paragon was forced to refund the $12 million it had raised in the sell-off, as reported by CoinDesk. Its $4 million coworking space is now on the market, and its coin is trading at $0.027, far below its January 2019 high of $10.28.

Jordan Friedman, CEO of payment tech firm Zodaka, told the Cannabis Business Executive that there are two reasons why cryptocurrency won’t solve the cannabis banking problem. “With crypto and cannabis, you’re combining two industries with the most uncertain and changing regulations,” Friedman said. “You’re trying to sync up two big concepts that are on their own courses and have their own problems, so a big core problem is the industries are moving too fast legally to work well together.”