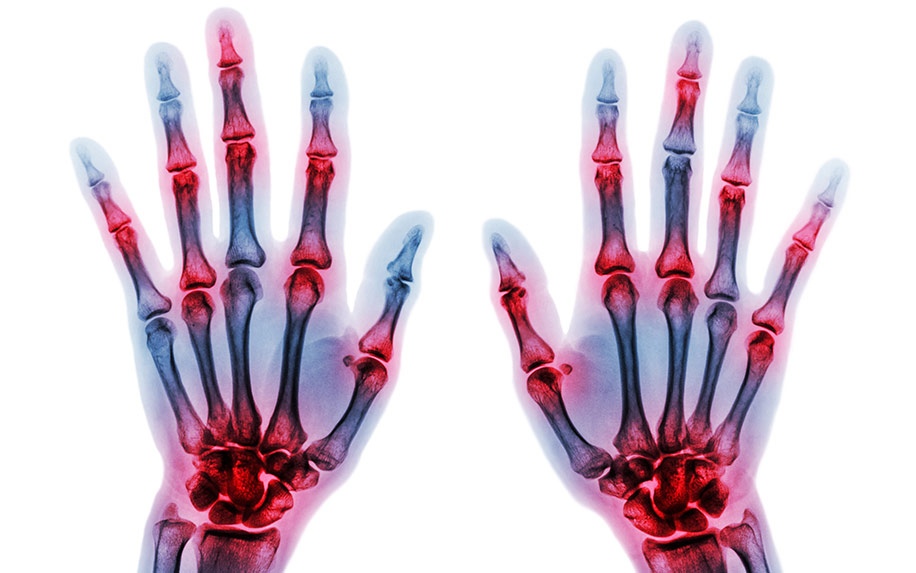 Arthritis sufferers are increasingly turning to cannabis to find relief from pain. Image Credit: By Puwadol Jaturawutthichai on shutterstock.

Many of America’s 50 million arthritis sufferers are turning to cannabis to manage their painful symptoms, and — according to a new survey — they’re reporting positive results.

In a new poll by online arthritis support community CreakyJoints; 57 percent of those surveyed had tried cannabis to manage their arthritis symptoms, and 97 percent said it helped ease their pain.

Though the survey didn’t delve into individual respondents’ experiences, it’s likely that many of their stories resemble that of reddit user Viking494:

In 2015 at age 58, arthritis started hitting me hard. Knee, hip, ankle were experiencing chronic pain and swelling. By 2016, I was struggling just to get up and down a flight of stairs … Started using Aphria Rideau CBD oil [in August] 2017 and had immediate relief. Within weeks, no more pain, no more swelling, no more prescription drugs, full mobility and movement.

Still, the study’s co-principal investigator Dr. W. Benjamin Nowell was careful to avoid hyperbole when discussing his team’s findings. “We have to temper our potential excitement about adding these products to an arthritis management strategy because there is so much yet to learn about [these supplements],” he said in a statement. However, he didn’t downplay their significance, either: “Anecdotally, and via this survey data, we know that there are many people with arthritis who benefit from marijuana and CBD products.”

However — although arthritis patients seem convinced that cannabis can have a positive impact on their condition, — many doctors remain skeptical.

What Doctors Think About Cannabis and Arthritis

While many patients with arthritis are finding relief with cannabis, the medical proof of its efficacy remains largely anecdotal, and there’s a substantial gap between patient interest in cannabis and well-researched and clinically tested medical knowledge. In a 2014 study published in the journal BMC Musculoskeletal Disorders, 70 percent of physicians said they would not know how to prescribe an appropriate dosage or counsel patients about possible interactions with other medications.

Still, some doctors are leading the charge to help arthritis patients manage pain with cannabis, even without a mountain of research to stand on. What information exists is good enough for Benjamin Caplan, M.D., founder of the CED Foundation and Clinic in Boston, who notes that cannabis has been used as a treatment for a variety of ailments around the globe for thousands of years — including in American clinics, where cannabis was widely prescribed until its prohibition in the late 1930s.

“We don’t quite understand all the details of how it works, but we do know that cannabis is a powerful anti-inflammatory agent, and that it operates in a different way than other anti-inflammatory drugs such as ibuprofen, steroids, or even the biological options available for treating rheumatoid arthritis and other autoimmune diseases. These traditional drug treatments can cause severe side-effects, many of which we do not see with cannabis,” he told Forbes.

Those traditional arthritis treatments with significant side effects include Tylenol and non-steroidal anti-inflammatory drugs, or NSAIDs, which can exacerbate liver and bleeding issues; disease-modifying anti-rheumatic drugs (DMARDs) and biologics, which can inhibit the immune system; and opioids, whose addictive properties need no introduction.

“If you put the opioids head-to-head with cannabis for mild to moderate pain, what we find is that they’re about equal,” as Jordan Tishler, M.D., a Boston cannabis physician at Inhale MD, Harvard instructor of medicine, and president of the Association of Cannabis Specialists, told Health Central. “In that situation, cannabis may be equally effective, but it’s a lot safer.”

These doctors are on the front lines of an ongoing battle between the desires of patients in pain and the federal law. While medical marijuana programs exist in 33 states, cannabis is still illegal in the eyes of the federal government, so though doctors and patients may be compliant with their local state laws, they’re effectively outlaws from the feds, risking fines, arrest, and prison time.

There are currently several bills in Congress, including the Marijuana Freedom and Opportunity Act supported by several 2020 presidential candidates, to legalize cannabis, but until then, the risks of the cannabis wild west carry over onto stockists’ shelves. Research from Penn Medicine found that 70 percent of CBD products available online had incorrectly labeled their CBD content, proving the importance of clear and consistent oversight. It’s an issue that urgently needs to be solved, as patients treating arthritis and other diseases with symptoms of chronic pain need medicine that’s precisely and consistently dosed.

“Medical patients are not the same as recreational cannabis users,” said Dr. Tishler.

While that’s a line that is steadily growing blurrier — a recent study found that most recreational cannabis users also used it for medical purposes — arthritis patients like Viking494 have emerged as some of the most compelling advocates for the benefits of medical cannabis:

“I am so thankful I found this route sooner than later. So much to learn, so many people that can be helped! Spread the word!”