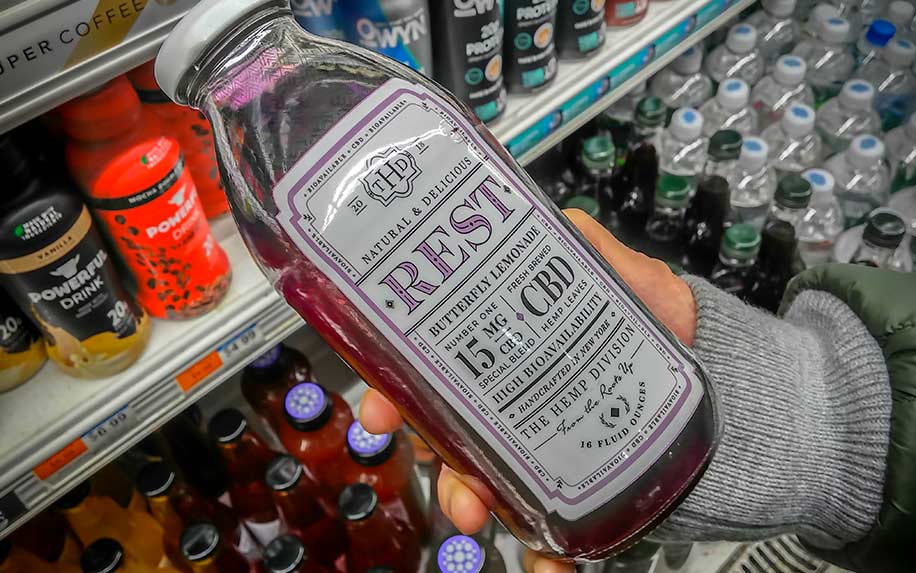 New York legislators ruled that CBD food and drink could not be sold in stores.Image Credit: By rblfmr on shutterstock.

As the formal ban on CBD edibles in New York City enters its second month, it’s quickly becoming a case study in how not to implement a public health program.

Jin Choi, owner of a distributor identified in Health Department documents as a source of CBD-infused drinks, told the Daily News that he received no warning of the ban. “In May, people stopped buying and then I saw a letter from the internet,” he said. “I just noticed from word of mouth and my friends showed me the letters they received.”

Through a Freedom of Information Act (FOIA) request, the Daily News obtained emails and internal documents relating to New York’s piecemeal ban of CBD, revealing a trail of inaction and contradictory instructions that stretches back to 2018, before hemp-derived CBD was made legal by that year’s Farm Bill. These documents showed how the NYC Hospitality Alliance repeatedly called on city officials to issue guidelines for businesses, as more restaurants began offering CBD-infused options on their menus.

But when officials at the state Agriculture and Markets Department finally issued guidance in December saying it was legal to sell CBD-infused edibles, as long as they were made according to dietary supplement standards — which ignored the Food and Drug Administration’s (FDA) ruling that CBD isn’t an approved dietary supplement — it only added to the confusion. The department has since reversed this decision.

As the FDA continues to drag its feet over CBD regulation, New York isn’t the only state that finds itself making up the rules as it goes along. As reported by the business outlet Mondaq, twelve states (with California likely to join them before long) have now passed laws that explicitly permit hemp-derived products to be added to food, while states such as Maine, Massachusetts, Ohio, and North Carolina have all imposed CBD-infused food and beverage bans of varying degrees of intensity.

In the middle of this all are the producers and sellers, who don’t want to be left behind. “It is so confusing because you can ask three different attorneys and get three different answers,” Allan Gandelman, founder of the New York Cannabis Growers and Processors Association, told Reuters. “So you decide you’re going to blaze a path forward, and produce a product that customers really want, and go for it until the government gets its act together.”

How New York Messed Up Its CBD Edibles Ban

Sporadic enforcement of the laws surrounding CBD edibles has been a common theme for much of the past year. In February, Fat Cat Kitchen was an early victim of New York’s uneven CBD crackdown, when Department of Health officials entered the café and “embargoed” nearly $1,000 worth of CBD powder, honey, snacks and raw cookie dough, despite having visited the establishment on two previous post-Farm Bill occasions when the CBD products were on prominent display. As the shop’s owner told Eater, “The whole thing [was] not fair,” as other establishments continued to sell CBD edibles without issue.

A similar fate befell the Brooklyn coffee shop Fare and Folk, whose owner Annette Bruno thought she had weathered the anti-CBD storm early in the year, when a violation that city health inspectors had assessed for selling CBD oil was voided. But on July 1, the first day of the official ban, inspectors on a supposedly routine inspection turned up $400 worth of CBD-infused products, giving Bruno the choice of permanently removing the products from sale or throwing them out. She threw them out.

“I honestly don’t feel like I’m doing anything wrong because I’m buying it from regular distributors,” Bruno told the Daily News. “All these other places are carrying it. But I know I have to work within the system because this is my livelihood.”

The Health Department documents revealed that eight establishments were targeted by New York authorities before the ban was officially announced. Starting October 1, those still selling CBD-infused food and beverages will be assessed fines from $250–600.

CBD sellers do have an ally in New York politics — city council Health Committee chair, Mark Levine. He told Gothamist that he considers the ban to be an overreach, and is planning legislation to oppose it.

“[The Department of Health] abruptly shifted policy on CBD without a clear process or reasoning behind it when it announced the ban,” he said. “The ban should be reconsidered until the governor makes a decision on the current state bill, and gives the city council the opportunity to consider how to move forward with regulation on the city level.”