How One of America’s Most Conservative States Embraced CBD 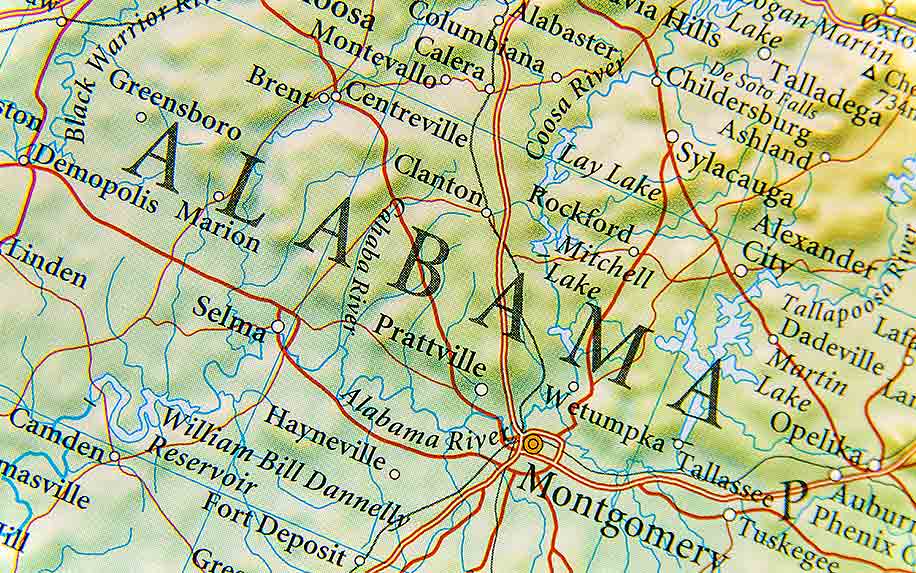 Alabama places no direct limitations on the manufacture, sale and possession of hemp-derived CBD. Image Credit: By Bennian on shutterstock.

Alabama is not known for its liberal cannabis policies — the conservative hotbed in the Deep South only recently approved a bill that would allow medical marijuana (which still needs the approval of Republican Governor Kay Ivey), and recreational legalization doesn’t appear likely any time soon. It may come as a surprise, then, to learn that the state has some of the most hemp (and CBD)-friendly laws in America.

This is because, according to the Canna Law Blog, Alabama places no direct limitations on hemp cultivation or the manufacture, sale and possession of hemp-derived CBD, as long as the percentage of THC they contain is below 0.3 percent.

While most states, with a few exceptions, have now legalized CBD with varying restrictions, at the federal level CBD remains classified along with cannabis as a Schedule 1 drug controlled substance (the most tightly-controlled category), though the U.S. Drug Enforcement Administration (DEA) has rarely enforced action against CBD manufacturers or vendors. In September 2018, the agency announced that drugs including CBD with less than 0.1 percent THC are now Schedule 5 drugs, as long as they’re approved by the Food and Drug Administration (FDA).

This points to CBD’s precise legal status continuing to be somewhat confusing with constantly moving parts — the result, many believe, of both the federal government and states starting to acknowledge CBD’s health benefits.

Alabama, Hemp, and The Agriculture Improvement Act of 2018

On December 20, 2018, President Trump signed into law The Agriculture Improvement Act of 2018, better known as the 2018 Farm Bill. In a groundbreaking move, the bill removed hemp from the definition of marijuana under the Controlled Substances Act (CSA) and legalized both the plant itself and its derivatives like CBD. Per the bill, federal regulatory authority of hemp cultivation now lies with the U.S. Department of Agriculture (USDA), and by submitting plans to the USDA, states can have primary regulatory authority over hemp grown in their state.

This has led to many if not most states making their own regulatory changes when it comes to legalizing commercial hemp production within state lines — and Alabama is a prime example.

Before looking at Alabama’s CBD laws, it’s important to know there are nuances as to how different states define hemp-CBD. In Alabama, industrial hemp (excluding marijuana) is defined as “all parts and varieties of the plant Cannabis sativa, cultivated or possessed by a licensed grower, whether growing or not, that contain a delta-9 tetrahydrocannabinol [THC] concentration of not more than 0.3 percent on a dry weight basis.”

In 2014, Alabama enacted Carley’s Law, a law that heavily restricted CBD for use only as a medicine for certain patients — specifically, those in a University of Alabama (UAB) study program. Then in 2016, the state expanded this in Leni’s Law, which permitted CBD to be used to treat several conditions and removed the requirement that patients be enrolled in the UAB program.

It was also in 2016 that Alabama gave the state’s Department of Agriculture and Industries (known as the AGI) full authority over industrial hemp and hemp product production, when it enacted the Alabama Industrial Hemp Research Program Act (AIHRP). The act defines hemp products as “any and all products made from industrial hemp, including, but not limited to, cloth, cordage, fiber, food, fuel, paint, paper, particleboard, plastics, seed, seed meal and seed oil for consumption, and seed for cultivation if the seeds originate from industrial hemp varieties.” The phrase ‘not limited to’ conceivably opens the door in Alabama for any CBD product containing no more than 0.3 percent THC.

However, as explained in the Canna Law Blog, the AGI’s regulations are not explicit when it comes to hemp-CBD processing and don’t address anything about the sale of hemp-CBD products, or whether processors, manufacturers, or those that sell hemp-CBD products (produced in Alabama or out of state) need a license.

On the other hand, in a Public Notice shortly before the AIHRP act was introduced into law, Alabama Attorney General Steve Marshall stated that “CBD derived from industrial hemp, with a THC concentration of not more than 0.3 percent on a dry weight basis, can be legally produced, sold, and possessed in the State of Alabama.” His statements were taken by many as an indication that all CBD-related economic activities in the state had government approval.

With the CBD floodgates in Alabama fully opened, in May 2019 Alabama state lawmakers directed the AGI to put a plan in place (which the agency estimated will take up to a year), to regulate and monitor hemp production, and develop regulations for commercially selling hemp-CBD products — following the example of a growing number of states that already have sales regulations in place.