Complaints About Treatment of Cannabis Workers On the Rise 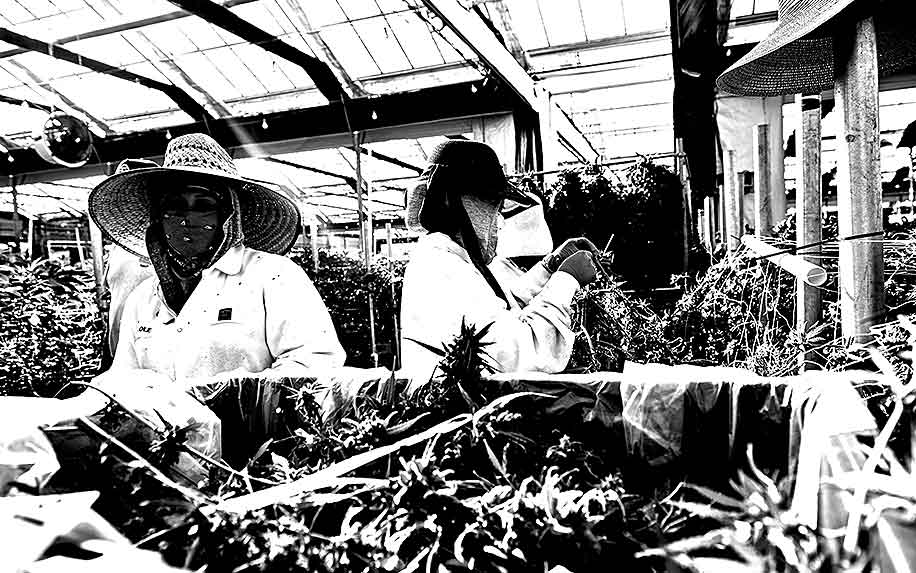 Cannabis workers face low wages, harassment, and even health hazards — and the problems are even worse for women in the field. Image Credit: By Liudi Hara on shutterstock.

Recently, a job ad from the online magazine American Marijuana made waves across the internet by promising one lucky person $3,000 a month to sample and review a wide range of cannabis products. Every news outlet from CNN to your local paper carried some version of the same incredulous story: “Now you can get paid to smoke cannabis all day! How wacky! What a time to be alive!”

But this dream job turns out to have a number of strings attached:

This type of exploitation is all-too-common in the cannabis industry. Companies know that jobs in the industry have a progressive, countercultural appeal, and use the promise of hip working environments and quirky perks to lure in many people disillusioned with climbing the corporate ladder.

However, when you’re working for Big Cannabis, the grass isn’t always greener.

According to Leafly’s Cannabis Jobs Count report, by the end of 2018 there were over 211,000 Americans working full-time in the cannabis industry. This number refers to people directly employed by cannabis companies — like the trimmers, processors, and budtenders who are the often-exploited backbone of the growing industry.

Take the case of workers at Patriot Shield Security, a hemp-drying plant in Jeanette, Pennsylvania. In early November, the local CBS affiliate reported that many employees had not been paid in weeks. A number of workers who protested this wage theft were fired, while others quit to find new jobs. The company offered no explanation for its failure to pay its workers. When reporters from the CBS affiliate attempted to visit Patriot Shield Security’s facility, they were told to stay off the property.

Workers seeking to protect themselves from this type of exploitation can face intimidation and harassment from their employers. Here, the experience of employees at Green Thumb Industries provides a sobering case study.

Based in Chicago, Green Thumb Industries is a national cannabis company with 1,300 workers at their 13 production facilities and 96 retail stores. The company’s LinkedIn page boasts that it was recognized as a “Best Workplace 2018” in Illinois — but as reported by the Quad City Times, workers who attempted to unionize in response to “mandatory overtime and unfair labor practices” were “illicitly polled and questioned coercively about their union organizing.” At least one employee was punished by the company for their attempts to unionize, while others have faced physical threats.

Many Cannabis Workers Are Underpaid, Too

The cannabis industry is (often assumed to be) hugely lucrative. According to the analytics firm Grand View Research, the global market for legal cannabis is expected to exceed $66 billion by 2025. But while investors and executives can reap huge rewards from this ever-growing revenue stream, only a tiny amount trickles down to the people who do the actual work.

In the cannabis industry, most of the jobs available are entry-level positions in retail and sales. According to the recruiting service Indeed, budtender is the most commonly held position in legal cannabis. These are the staff members you’d chat with at a dispensary, the ones offering tips on what products to try and helping you ring up your purchases. The second most popular position is sales associate, which is basically a different name for the same thing. The rest of Indeed’s “Top Twenty Cannabis Jobs” list includes a handful of white collar positions like dispensary manager or pharmacist, but it’s far more common to see titles such as grower, trimmer, or packager.

It’s difficult, if not disingenuous, to suggest these workers are being paid a wage that reflects the industry’s growth. A budtender makes an average of $32,340 a year, while trimmers will likely make just under $30,000 according to Marijuana Business Magazine. According to the U.S. Department of Health and Human Services (HHS), in 2019 the federal poverty line for a family of four was $25,750.

Even these estimates of cannabis workers’ earnings may be overly optimistic. Many trimmers, for example, are not paid a salary or hourly wage. They’re paid for each pound of cannabis they harvest, and these rates have been dropping significantly. One trimmer, who has spent six years working in the industry, told The New York Times he once made $250 for each pound he trimmed. Now, he makes just $125.

Health Hazards Are Common in the Cannabis Industry

Cannabis workers may be frequently overworked and underpaid, but those aren’t the only downsides they must deal with. Since the cannabis industry is still illegal at the federal level, workers are also subject to a wide range of safety risks, without even the meager protections of the country’s toothless labor laws.

In 2017, a report from researchers at Colorado State University and Colorado Public Health found that many cannabis workers face daily biological, chemical, and physical hazards with minimal training or protections. According to the report, “most workers reported that their businesses did not pay for any of their health care coverage,” while 23 percent of workers “never received health and safety training on the job.”

For workers in the fields, greenhouses, extraction facilities, and manufacturing plants that produce the huge array of cannabis products Americans have come to love, this can be extremely dangerous. According to the industrial safety firm NES Global, cannabis workers are often exposed to risk factors like:

Many proponents of the cannabis industry point to the growing number of women-focused brands and powerful female executives as evidence that cannabis is more representative and equitable than older, stodgier lines of work. For rank-and-file female workers, though, the picture is somewhat darker.

Female trimmers, in particular, are often subject to horrific working conditions. Back in 2016, Reveal (the digital platform of The Center for Investigative Reporting) released a devastating report about the culture of abuse in California’s “Emerald Triangle,” one of the most fertile cannabis-growing regions in the country. The report described how many young female trimmers were told to work topless in exchange for higher rates. In some cases, male farmers and business owners would threaten, imprison, or even rape female workers who sought to recover the money they were owed.

Since then, it’s not clear if conditions have improved. In The New York Times’ 2019 profile on “trimmigrants,” people who migrate to cannabis-growing regions for seasonal trimming work, one woman said that wage theft and rampant sexual harassment are still commonplace. “When you’re alone out here as a girl it’s really scary,” she told the newspaper. “I know girls who’ve disappeared.”

While such problems aren’t unknown in the legal industry, they’re even more pronounced in the flourishing black market. Many growers operate without licenses, meaning that it’s even more difficult to ensure their workers are being paid a fair, livable wage and treated with basic dignity. Illegal cannabis grow ops might be ruining America’s national parks, but their impact on human lives can be even worse.

No single cannabis worker can go toe-to-toe with powerful venture capitalists or exploitative bosses. The solution, as it has always been, is to unionize. While the experience of the Green Thumb Industries workers shows that this can be an uphill battle, the success of the United Food & Commercial Workers (UFCW) shows just how great the rewards can be.

Since 2010, the UFCW has been representing workers in the cannabis industry. Not only has the union helped workers secure safer working conditions and more reasonable hours, it’s also helped negotiate for better pay and benefits. For example, in July it hosted California’s first industry-specific safety training program for cannabis workers. In August, it negotiated the first union contract with a cannabis retailer in Washington, which included comprehensive health care coverage for workers.

Some states, like California and New York, have recognized the importance of ensuring fair treatment for cannabis workers. In both of these states, “labor peace deals” are a legal requirement. This means that when a business has more than 20 employees, it must formally agree to refrain from discouraging its employees against forming a union. Labor peace deals also mandate that unions be able to meet in the workplace without interference from management. The efforts of organizations like UFCW have been integral to these improvements in workers’ conditions.

Predictably, the prospect of unionization has also faced backlash from business owners who claim the industry is too fragile, and their profit margins too narrow, to accommodate the humane treatment of workers. Some even claim that the policy changes championed by UFCW have forced a number of dispensaries to close. Those who oppose cannabis unions claim that they share the same goals of safer working conditions and more equitable pay, but believe they can be achieved without the interference of “outside agitators.”

This is the same line once trotted out by the garment factory owners of the 1800s and the mining conglomerates of the 1900s and it is, as it has always been, a boldfaced lie. If the cannabis industry aspires to anything more than papier-mâché progressivism, it needs to stop fighting against unionization.