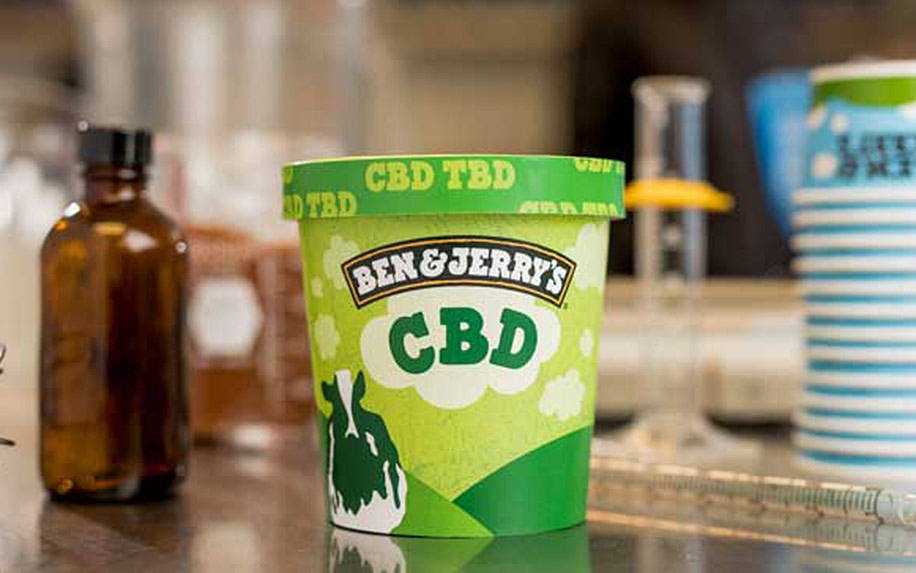 Ben & Jerry’s CBD ice cream could make it to a store near you. Image Credit: benjerry.com

Make room in your freezer: legendary ice cream maker Ben & Jerry’s has just launched a CBD-infused ice cream that may — emphasis on may — be coming soon to a store near you

On May 30, the company made a statement on its official site: “You probably already know that we’re fans of all things groovy – so it’s no surprise that we can’t wait to get into the latest food trend: cannabidiol, or CBD. We are open to bringing CBD-infused ice cream to your freezer as soon as it’s legalized at the federal level.”

The new, yet-to-be-named flavor would not be the company’s first brush with cannabis culture — its flavors like Half Baked and Phish Food have long been popular with stoners and non-stoners alike. And to celebrate 4/20 (a cannabis-themed holiday observed on April 20) this year, the company used its platform to publicly call for Congress to expunge all prior cannabis convictions and issue pardons for those arrested under now-outdated laws.

With its announcement of its CBD-infused plans, Ben & Jerry’s issued another call to action: this time, they encouraged their customers to take action and actively contact the Food and Drug Administration (FDA) to demand clearer CBD regulations. An FDA-driven crackdown on food and drinks containing CBD has prevented Ben & Jerry’s — along with many other national brands — from rolling out new infused products, and while a recent FDA hearing was a promising (if overdue) move in the right direction, it’s still unlikely to yield swift results. If Ben & Jerry’s is serious about waiting for the federal go-ahead, it might be a long time before its CBD ice cream is available to the public — as former FDA commissioner Scott Gottlieb said, such a process normally takes several years at least.

However, there’s an alternative scenario in which Ben & Jerry’s TBD CBD ice cream could wind up in your fridge sooner rather than later.

How Ben & Jerry’s Could (Could!) Release Its CBD Ice Cream Anyway

Despite the nationwide ban on CBD-infused edibles, some states like Colorado and Illinois have defied the FDA and passed their own laws legalizing such products. California is expected to join them soon — in May 2019 the state’s health and appropriations committees unanimously approved a bill that would make products like Ben & Jerry’s CBD ice cream legal.

These states, all of which have legal recreational cannabis (with Illinois recently becoming the 11th state to fully legalize the plant for adult use) represent a massive potential market: California alone would have the world’s 5th-largest economy if it were an independent nation, according to federal data. And with a combined population of nearly 58 million, Ben & Jerry’s could reach a tap into a huge customer base even if its CBD ice cream were only released in those three places.

So what’s preventing this move? Leaving aside the finer points of interstate commerce, the biggest obstacle might be Ben & Jerry’s own principles (and preferences for locally-sourced ingredients). According to the company’s statement, “We want to use sustainably-sourced CBD from our home state of Vermont,” and many of the company’s preferred vendors — such as Rhino Foods, which supplies Ben & Jerry’s famous cookie dough —are also based in the Green Mountain State. While it’s certainly possible that the company could find ethical, environmentally-friendly business partners elsewhere, it likely wouldn’t happen overnight, and the logistical headaches of shifting production to CBD edible-friendly states might be more than Ben & Jerry’s is willing to stomach.

In the meantime, though, its fans can keep their fingers crossed — or, if they’re so inclined, write a letter to the FDA.