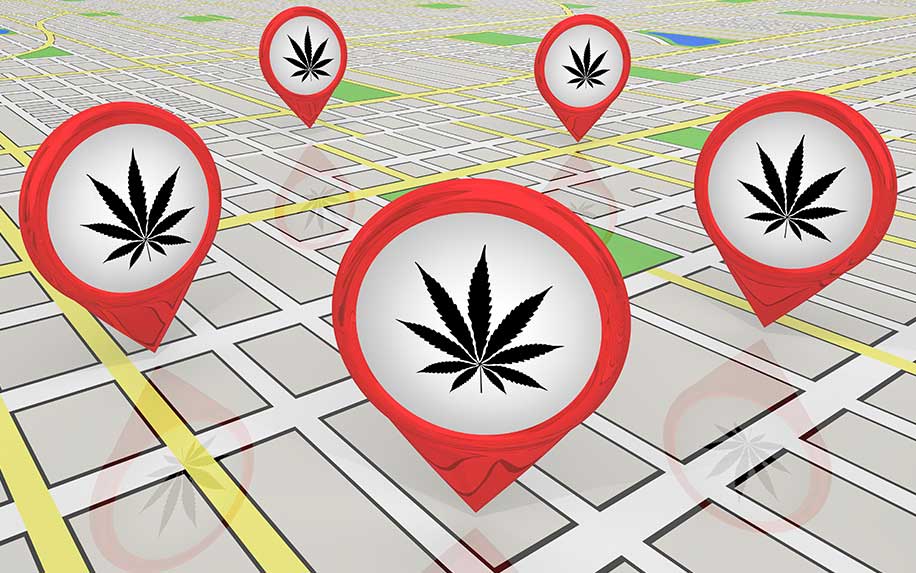 Illegal cannabis dispensaries have been able to lure customers away from legal ones by offering lower prices and looser restrictions. Image Credit: By iQoncept on shutterstock.

If you regularly shop at a cannabis dispensary, it probably never occurred to you that it might be an illegal one. But they’re much more common than you might imagine (keep reading for our tips on how to spot them), and they’re causing major headaches across the country.

When a recent Los Angeles Times exposé revealed that illegal cannabis dispensaries and delivery services in California outnumber their legal counterparts by a tally of 2,835 to 873, the findings highlighted a growing problem in many states: The black market is still smothering the legal cannabis industry.

In August of this year, The Pew Charitable Trusts published a study that investigated revenue from legal cannabis sales in states that allow recreational use. Perhaps unsurprisingly, sales in California drastically underperformed expectations — in the first six months of collecting taxes on legal cannabis, the state collected 45 percent less revenue than anticipated. While this phenomenon wasn’t universal (Nevada, for example, exceeded projections by 40 percent), it does put a damper on the idea that tax revenue from cannabis could be a dependable boon for state budgets.

As pointed out by Pew researchers, this creates significant problems for state officials. When they write yearly budgets, projected tax revenue is often earmarked for specific reasons. If cannabis doesn’t sell as anticipated, this can result in state governments not having the cash to fund a variety of projects. Some states, like Colorado and California, have tried to get around this problem by collecting cannabis tax revenue in a separate fund and setting it aside for the coming year, but it’s an imperfect solution at best.

Still, the question remains: What’s driving this trend? Are Americans losing interest in cannabis? On the contrary: Studies show more Americans are using cannabis than ever before. However, since legal dispensaries tend to be much more expensive than the black market, even people in legalized states are shunning them in favor of more affordable sources. Illegal dispensaries, which don’t pay taxes on their sales or adhere to state regulations that govern the maximum amount of cannabis that can be purchased, have been able to lure customers away from legal ones by offering lower prices and looser restrictions — causing no small amount of consternation for the owners of legal dispensaries.

Greg Meguerian, owner of The Reefinery dispensary in Los Angeles, is one of many legal cannabis entrepreneurs whose business is threatened by illegal competitors. After a new dispensary opened nearby, he noticed that they were selling after legal hours — and selling larger amounts of cannabis than permitted under state law. He soon realized that he was competing with a black market dispensary. As he told Politico, “I told the state, ‘If I lose 20 percent [in sales], you just lost 20 percent in taxes.” Still, his complaints went unheeded for months.

“You feel like your words are falling on deaf ears,” said Meguerian. It took almost three months for Los Angeles police to raid the illegal dispensary and shut it down.

In Los Angeles alone, an estimated 250 illegal dispensaries are currently in operation, according to a report from CNBC. “We’re outnumbered 3 to 1, illicit operator to legal operator,” said Cameron Wald, executive vice president of the Project Cannabis dispensary. “So, you know, we have outrageous price compression that we have to see at our stories in order to compete with people that are not paying their taxes.”

His concerns were echoed by Patricia Heer, attorney and founder of the Cannabis Law Digest, who says that the problem isn’t limited to California. “The black market is a huge problem. In some states, it’s between 70 percent and 80 percent of sales,” as she told CNBC.

Aside from lower prices, many illegal dispensaries also offer perks that their legal brethren can’t offer — including free cannabis in exchange for good reviews, and even allowing consumption within the dispensary itself, which isn’t allowed under state law.

While states like California that tightly control the sale of legal cannabis have drawn criticism for price inflation and overregulation, taking a more hands-off approach isn’t without its issues. For example, when Oregon legalized recreational cannabis sales in 2014, it adopted much laxer policies that allowed for unlimited licenses (and thus, lower prices). While this did help keep illegal sales under control within the state itself, it also led to a glut of unsellable cannabis, which is now making its way across state lines to be sold illegally elsewhere.

So what’s the plan moving forward? It appears that, as is the case with cannabis legalization itself, the matter will largely be left to individual states. As Drug Enforcement Administration (DEA) spokesman Rusty Payne told the New York Times earlier this year, federal agencies simply don’t have the bandwidth to combat the problem. “We’ve got our hands full with the opioid epidemic, to be honest,” he said.

In states like California, officials are taking matters into their own hands. Earlier this summer, the state launched a $1.7 million advertising campaign urging consumers to only purchase cannabis from legal sources, citing the risk of contaminated products on the black market. In 2019 alone, the LAPD has arrested 277 people who were part of illegal dispensary operations. State authorities are even shutting off the utilities of buildings that are known to house illegal dispensaries.

However, until the legal cannabis industry becomes more affordable and accessible, it’s likely that these black market operations will continue to thrive.

How to Identify an Illegal Cannabis Dispensary

While all states with legal cannabis have a database of licensed dispensaries that can be accessed by the public, most people won’t go to the trouble of poring through government websites to determine if a given dispensary is legitimate or not. Fortunately, there are a number of other simple clues that can help you know whether your dispensary is legal:

Cannabis sold at dispensaries is generally quite pricey — in California, for example, the average cost is $16 per gram, according to Marijuana Rates. If you’re finding it for half the price, sound the alarm bells.

States with legal cannabis have strict rules on the maximum amount that can be purchased at once. In California, for example, you’re limited to 28.5 grams of flower or 8 grams of concentrate.

Legal dispensaries require customers to show their ID before they can enter the sales room. If you’re not asked to produce a driver’s license, passport, or ID card to prove your age, chances are you’re in an illegal dispensary.

Legal dispensaries are required to sell their products in resealable, childproof containers — and generally, these must be free of colorful designs or attractive branding. If your dispensary’s products come in cool packaging (or just a plain old ziploc bag), that’s a major red flag.

Legal dispensaries have to abide by state regulations that forbid cannabis consumption on their premises, or risk losing their licenses. “Cannabis cafes” or “lounges” might be coming in the future, but for now you can’t buy and use cannabis in the same place legally (with a few extremely rare exceptions like this one).