Will Ohio, Pennsylvania, and New York Be Next to Legalize Cannabis? 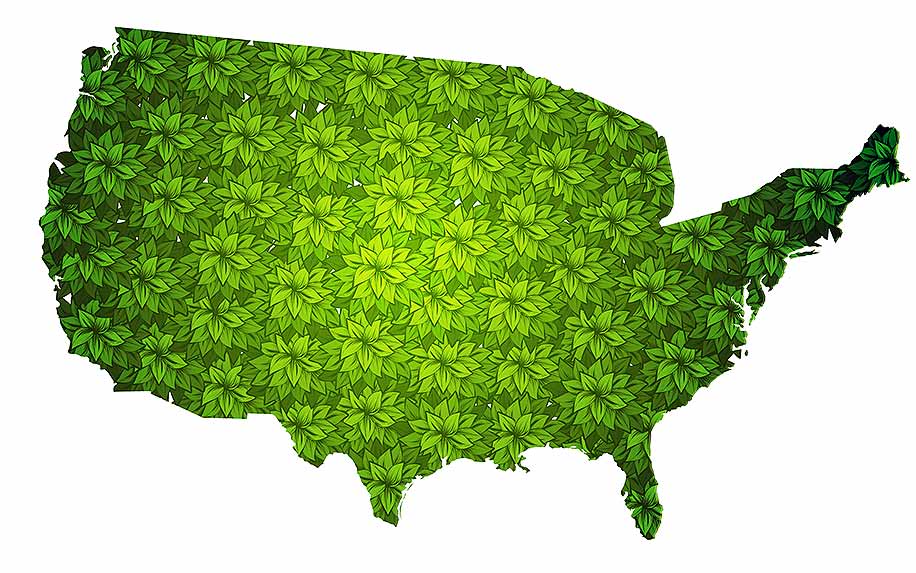 New York, Ohio, and Pennsylvania are three of the most populous states in all of the U.S. Image Credit: By LongQuattro on shutterstock.

New York, Ohio, and Pennsylvania are three of the most populous states in America, and as such, they hold a great deal of sway over the country’s politics. While the hype is already mounting over which way these states might lean in the 2020 presidential elections, they might be exerting their influence even sooner on another pressing matter — recreational cannabis legalization.

Ohio is seeking to become the next major domino in American cannabis reform with a November ballot measure on legal cannabis. In the meantime, advocates are gaining traction on the local level. On June 12, Cincinnati’s City Council approved a measure to fully decriminalize the possession of up to 100 grams of cannabis. If the law stands — it will go into effect in 30 days if another legalized cannabis law doesn’t supersede it — it will be the latest municipal move toward legalizing cannabis in Ohio, after five cities decriminalized in 2018.

In Pennsylvania, as in Ohio, much of the movement to fully legalize cannabis has been fueled by frustration at the shortcomings of the states’ medical marijuana programs. Both states’ medical boards have been unable to devise a system that meets the needs of patients and ensures a steady supply of medication — a problem that many hope could be resolved by the removal of all state prohibitions on cannabis.

New York seemed to be at a different point on the legalization timeline at the start of the year, but the legalization mood has seemed less certain as the year has worn on — leading up to furious negotiations and the eventual surrender of pro-legalization Governor Andrew Cuomo (D) in the run-up to the June 19 end of the legislative session.

While the outcomes of legalization efforts in all three of these Great Lakes states are still uncertain, one thing is clear — the nation will be watching.

When Will New York Have Legal Cannabis?

New York’s legalization push promises to improve upon the mistakes of other states, which legalized cannabis mostly through ballot measures and not through careful legislation. According to lawmakers negotiating the potential bill, the problems they are seeking to avoid are the rising emergency room visits that Colorado has seen (partly due to cannabis-related driving accidents), the continued presence of a black market in California (partly due to overpriced dispensaries), and the racial disparities in cannabis business ownership experienced nationwide.

The most vocal support for legal cannabis in the state has come from Gov. Cuomo, who was also behind the successful 2014 campaign to legalize medical marijuana. Despite this high-profile support, New York’s medical cannabis program was criticized as being among the worst regimens in the country when it was put into effect — with a highly limited list of qualifying conditions for registered patients participating in the program. These medical conditions included some of the chronic illnesses that medical cannabis has proven most effective in treating, such as cancer, ALS, and ulcerative colitis, but ruled out about 90 percent of the other conditions that qualify for medical marijuana ID cards in other states.

As the medical cannabis program continues to expand its patient and caregiver registry into 2019, many have seen it as a sign that the home of the most cannabis-positive city in the US — New York City has double the cannabis users of Los Angeles, and 12 times that of Denver — is making deliberate moves toward legalization.

But not this year, as reported in The Hill. Although Cuomo said he would grant the potential legalization bill — which was in state legislature negotiations up till the last day of the 2019 legislative session — a special exemption from public review, sponsoring state Sen. Liz Krueger (D) announced June 19 that she would table the bill.

“This is not the end of the road,” Krueger said, “it is only a delay. Unfortunately, that delay means countless more New Yorkers will have their lives up-ended by unnecessary and racially disparate enforcement measures before we inevitably legalize.”

When Will Pennsylvania Have Legal Cannabis?

People have been frustrated with Pennsylvania’s medical cannabis program almost since the moment it was legalized on April 17, 2016 — and a recent PennLive exposé is helping to shed light on why rollout has been so fraught. According to the investigation, there have been “significant errors and irregularities” in the evaluation of applications for dispensary licenses, which may have caused supply issues in the state’s 50 licensed dispensaries that must to cater to more than 130,000 medical cannabis cardholders.

One similarity that Pennsylvania shares with Ohio and New York is that its biggest cities are leading the way in decriminalizing cannabis. So far, Philadelphia, Pittsburgh, and the capital city of Harrisburg have all voted to decriminalize cannabis, a fact that must have played in to the results of Lt. Gov. John Fetterman’s 2019 listening tour around cannabis legalization.

At the urging of the cannabis-sympathetic Gov. Tom Wolf (D)— who late last year said “it is time for Pennsylvania to take a serious and honest look at recreational marijuana” — Fetterman toured 67 Pennsylvania counties from February to May 2019, seeking reactions to the possibility of statewide legalization. He reported about 65 percent of those he met with were in favor of legal cannabis.

A comprehensive legalization bill was introduced in February into the state House of Representatives by Rep. Jake Wheatley (D) and 26 co-sponsors. However, the bill seems to have an uphill battle ahead of it in the Republican-majority state House and Senate. No Republican legislator in the state has yet voiced support for legalization.

When Will Ohio Have Legal Cannabis?

Ohio may be the first of the states discussed in this article to take the plunge into cannabis legalization, as the state considers a ballot measure on the issue for November. The measure, called the Ohio Marijuana Legalization Initiative, would legalize the use, possession, and sale of cannabis for persons age 21 or older. As a growing majority of Americans support recreational cannabis legalization, any time a proposal is put to the ballot test it usually has a good chance of being approved.

However, such a test was tried before in Ohio in 2015, and soundly defeated by a 2:1 margin. The difference then was in the fine print, and the initiative was roundly criticized for its plan to grant 10 cannabis growers a monopoly on production in the state. It failed to receive the endorsement of the Drug Policy Alliance and the Marijuana Policy Project, and received unenthusiastic support from NORML.

Though Ohio was an early proponent of decriminalization, its progressive stance has rolled back in recent years, with 15,000–17,000 cannabis possession arrests made annually. But its city-based decriminalization initiatives and improving medical cannabis program seem to suggest that reform momentum is growing.