Where Is Cannabis Legal In the U.S.? 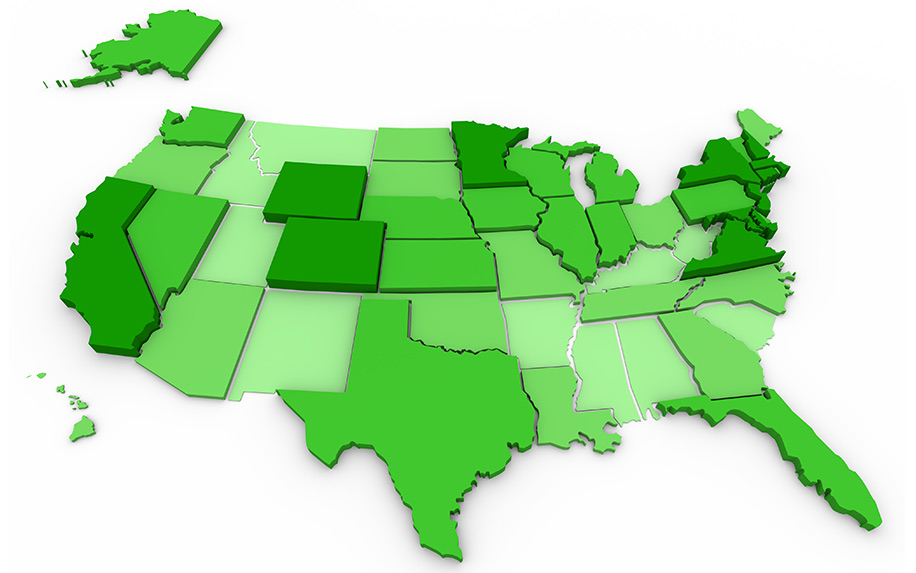 When newly-installed Connecticut Governor Ned Lamont (D) said in his 2018 campaign that cannabis legalization is “an idea whose time has come,” he wasn’t just giving lip service to the least-divisive issue of modern American politics. He was stating an objective fact: today, 33 states have legalized medical cannabis, while 10 states (and Washington D.C.) have legalized recreational use as well. The American people have spoken, and they want more cannabis.

As Ernest Hemingway once said, the change has come gradually, then suddenly — and in many different ways. In 2018, 23 states introduced legislation to either decriminalize possession of small amounts of cannabis; fully legalize marijuana possession, production and sale for recreational purposes; or create new medical marijuana laws. Michigan and Vermont became the 9th and 10th states to legalize the plant for recreational purposes, while Utah, Missouri, and Oklahoma added their names to the ledger of states with legal medical marijuana.

Thanks to the 2018 Farm Bill, hemp is now legal nationwide, and while federal lawmakers are still dragging their feet on legalizing cannabis as well, they’re facing growing pressure from their neighbors to the north and south. In October 2018, Canada became the second country worldwide to pass a cannabis legalization bill, while Mexico ruled that prohibition of the plant was unconstitutional, setting the table for an incoming liberal government to follow Canada’s lead.

In 2019, the momentum has only grown stronger. 12 states have introduced legislation that would relax their laws on cannabis, while the federal legislature will vote on two national cannabis legalization bills that enjoy a wide base of bipartisan support. While the Obama-era endorsement of the primacy of state laws on cannabis suffered under former Attorney General Jeff Sessions, the nation’s new top cop William Barr has given his qualified support to states that have legalized and decriminalized marijuana.

“I think the way to go is to permit a more federal approach so states can make their own decisions within the framework of the federal law, and so we’re not just ignoring the enforcement of federal law,” Barr told the Senate Appropriations Committee on April 9.

States Where Medical Cannabis Is Legal 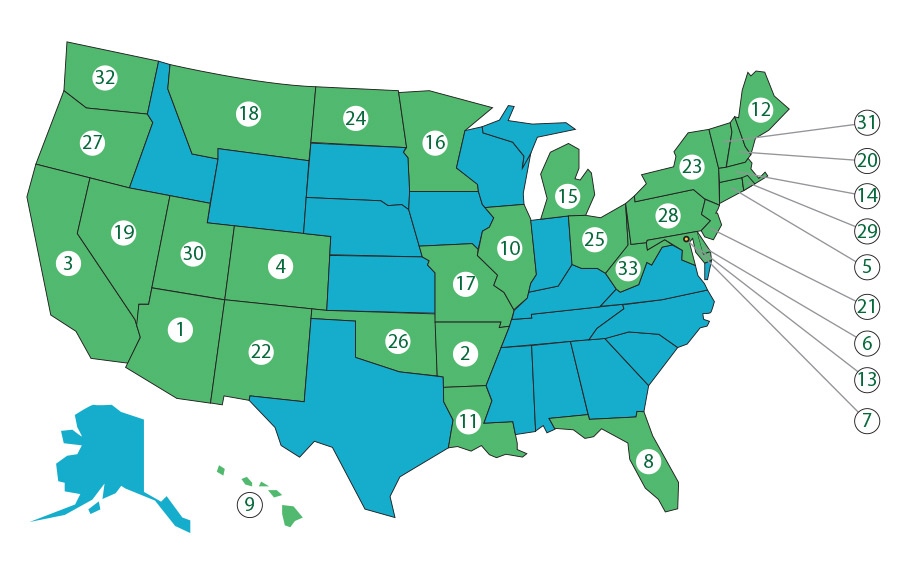 It all started with Proposition 215, the 1996 California voter initiative that legalized medical cannabis and was the first major blow against prohibition. According to the same Pew Research Center survey that now puts American support for full cannabis legalization north of the 60 percent mark, nearly 80 percent of the country believed that cannabis should be fully illegal at the time.

Nevertheless, it passed, and the law was the most important early win in a medical cannabis movement that now counts 33 states among its members. It also gave a winning strategy to the movement going forward — give voters real-world examples of the sick people that medical cannabis could help, and show that doctors supported it, too.

In 1998, Alaska, Oregon, and Washington drew up their own medical cannabis laws, and in the next few years, Maine, Hawaii, Nevada, and Colorado followed suit. All of these states with the exception of Hawaii now have full legalization on the books.

In 2001, the Supreme Court pushed back on the gathering momentum by ruling 8-0 that “there is no medical necessity exception to the Controlled Substances Act’s prohibitions on manufacturing and distributing marijuana.” For a while after, things were touch and go. In 2002, the US Court of Appeals ruled that the government couldn’t revoke physician licenses because of their support of medical cannabis; in 2003, Congress rejected an amendment to stop federal raids on medical cannabis patients.

All the while, a body of research was growing in favor of the wide-ranging effectiveness of medical cannabis, and public opinion grew along with it. In 2004, Vermont and Montana became the 9th and 10th states to legalize medical cannabis. That same year, a AARP poll found that 72 percent of seniors supported medical cannabis.

From 2006–2008, Rhode Island, New Mexico and Michigan were the only states to adopt medical cannabis laws. In 2009 the tide started to change with the US Department of Justice’s Ogden Memo, which said that prosecutorial priorities shouldn’t target medical cannabis patients and their caregivers (although the DOJ continued to target cultivators and dispensaries with cease-and-desist letters).

From 2010–2012, New Jersey, Arizona, Delaware, and Connecticut swelled the medical marijuana ranks, and in 2012 both Colorado and Washington passed bills to legalize recreational cannabis. Along with Utah’s first-of-its-kind low-THC, high-CBD medical cannabis law, this provided the momentum for 15 new adoptees of Utah’s model in 2014–2015.

In 2014, the Rohrabacher–Farr Amendment was approved, which prohibits the Department of Justice from spending funds to interfere with state medical cannabis laws. Medical cannabis has continued its steady surge in the years since, helped along by the 2018 Farm Bill’s nationwide legalization of hemp-derived CBD.

States Where Recreational Cannabis Is Legal 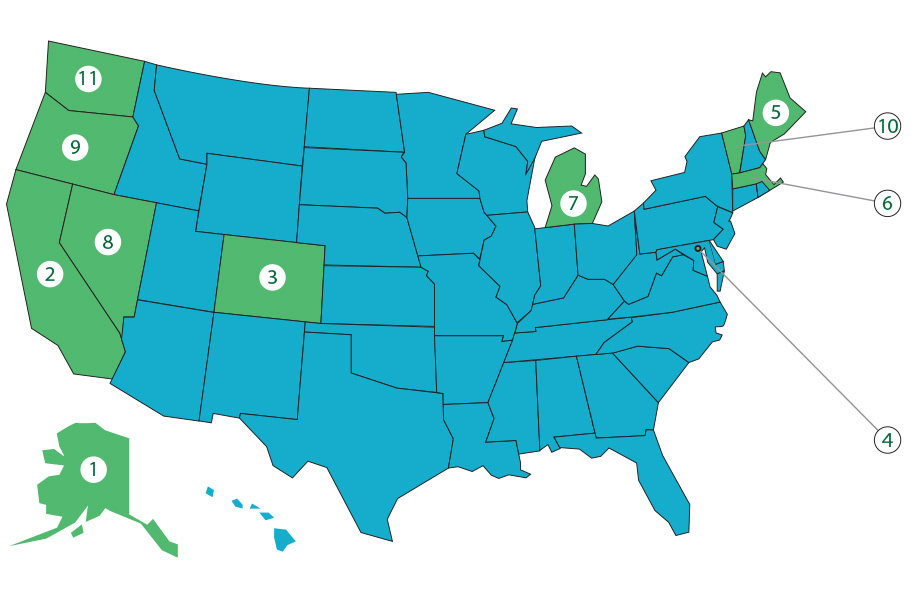 The spread of medical cannabis laws throughout the US was preceded and accompanied by decriminalization measures, and each held their own portents for eventual full legalization. In 1973, Oregon was the first state to decriminalize cannabis — which, combined with its trailblazing medical cannabis law, laid the groundwork for its 2014 legalization. Other early adoptees of decriminalization included Alaska, Maine, Colorado, and California, states which have all now fully legalized cannabis (moves that were greeted with approval by medical patients, recreational users, and the burgeoning cannabis tourism industry).

In the first decade of the 2000s, reform efforts bumped into a predictable wall with recreational cannabis, with ballot initiatives in Alaska, Nevada, Arizona, Colorado, and California all attracting support in the 39–47 percent range. But in 2012, Colorado and Washington both passed successful ballot initiatives, signaling the start of a new era.

In 2013, the Obama Administration gave its tacit approval to this trend in the Cole Memo, a set of Department of Justice-issued guidelines which gave deference to state cannabis laws. This combined with shifting attitudes toward cannabis in the public to fast-track legalization, which has now reached 10 states, the District of Columbia, and two US territories.

In 2014, Alaska and Oregon legalized recreational cannabis, and in 2016 California, Nevada, Maine, and Massachusetts followed suit. In 2018, both Vermont and Michigan voted for recreational use cannabis — with Vermont becoming the first state to legalize via legislative measure rather than ballot initiative. The two US territories which have also legalized cannabis, the Northern Mariana Islands and Guam, also got there through an act of legislature.

States That Are Considering Legalizing Cannabis 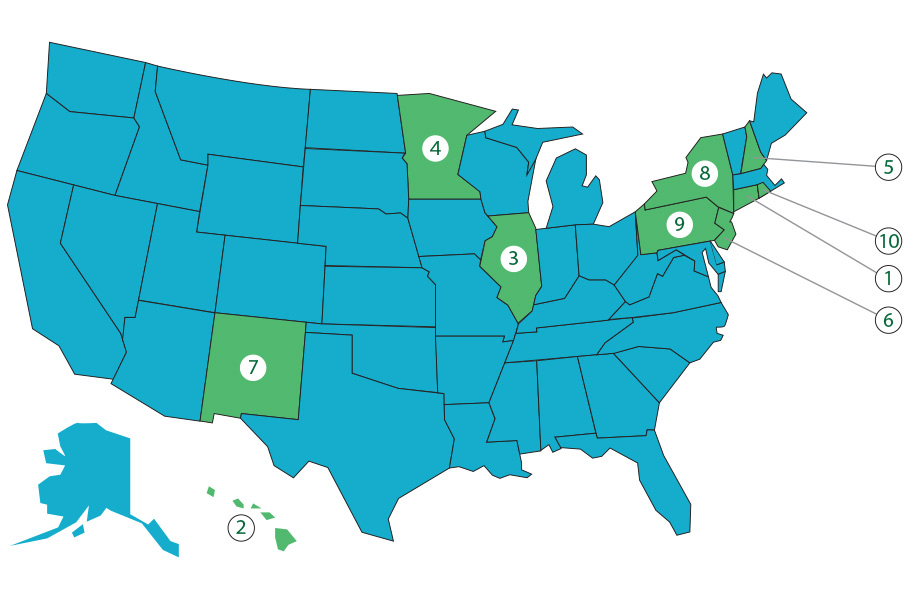 As legalization spreads through certain areas of the country, the attractiveness of the status quo is decreasing apace. Sometimes it seems easier to find a state that isn’t considering a change to its cannabis laws than ones that are.

A prime example can be found in Rhode Island, where a plan to legalize, regulate, and tax cannabis is currently under consideration as part of the 2020 budget, the legalization rolling through New England has changed the state’s trajectory.

“With the reality of it being all around us, I think folks have to look at it a little harder now,” said Democratic state representative Scott Slater. “Even if you’re against recreational cannabis and you feel there are social costs to it, you’re going to be dealing with those issues within your own borders, regardless, and without any of the revenue you could be raising. You might as well regulate it and tax it and put some of that money toward prevention.”

While public support for legalized cannabis continues to, attempts to translate this into legislative change have yielded mixed results. Earlier this year, Hawaii and New Mexico both passed legislation decriminalizing cannabis, although both states also saw bills for full legalization fail. New Jersey saw its legalization bill collapse amid Democrat infighting, while New Hampshire’s legalization bill passed a House vote and now awaits the judgment of the state Senate. Although New Hampshire Governor Chris Sununu (R) has said that he would veto any bill that made it to his desk, the House speaker believes that the state legislature has the votes to overcome a veto.

Despite the temporary setbacks in these states and many others, it does seem inevitable that legalization will someday come — the real question is, “When?”