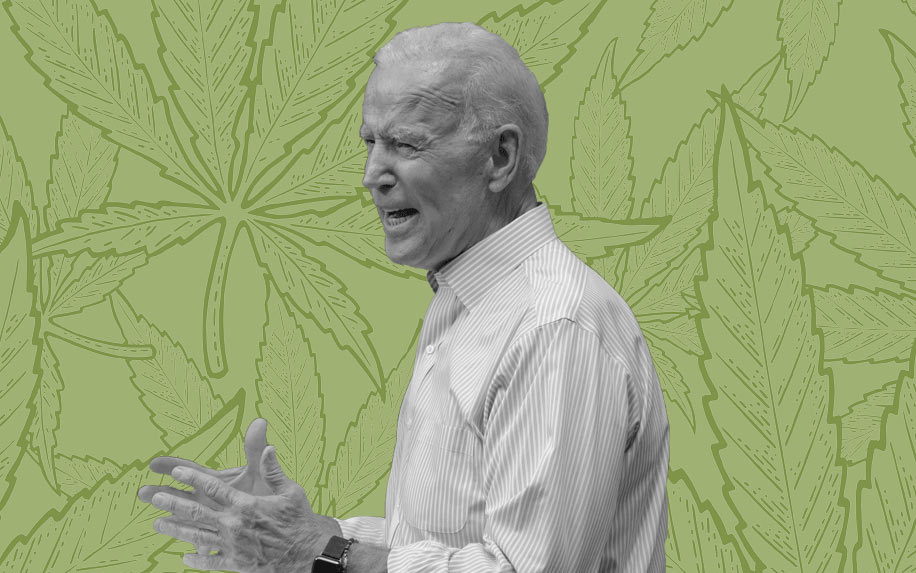 For a presidential candidate whose appeal seems to come from his lack of controversy, Democratic “frontrunner” Joe Biden sure has generated a lot of it with his latest cannabis claims.

At a town hall in Las Vegas on November 16, Biden stuck to his conservative cannabis stance by saying, “The truth of the matter is, there’s not nearly been enough evidence that has been acquired as to whether or not it is a gateway drug.”

Biden then suggested a compromise: “It’s a debate,” he said, “and I want a lot more before I legalize it nationally. I want to make sure we know a lot more about the science behind it. That’s why I want to move it from a Schedule I drug to a Schedule III, so you can in fact do this.”

Biden’s fellow Democratic candidates were quick to distance themselves from the former second-in-command. At a debate in Atlanta, Sen. Corey Booker (D-NJ) mocked Biden’s comments, saying, “I thought you might have been high when you said it.” Sen. Bernie Sanders (I-VT) tweeted, “The American people are united on issue after issue. We must legalize marijuana now — and expunge all past marijuana convictions as a matter of racial and economic justice.” Sen. Kamala Harris (D-CA) chimed in too: “Let’s be clear: marijuana isn’t a gateway drug and should be legalized.” And longshot candidate Andrew Yang addressed the issue with patronizing supportiveness, telling CNN, “I believe that Joe actually will end up evolving on this issue over time if he sees the same evidence that I have.”

Biden Has Been Claiming Cannabis Is a Gateway Drug For Decades

It’s not clear how Yang arrived at that optimistic conclusion. For those who have been paying attention to Biden’s stance on cannabis over the years, his “gateway drug” inference is nothing new.

Although Biden’s anti-cannabis legacy stretches back to his early career as a senator in the 1970s — and the 1980s, when he campaigned for the creation of the executive office of “drug czar,” and the 1990s, when he was a leader on the 1994 crime bill which proved crucial to the country’s spike in incarceration of  nonviolent drug offenders — one need not look back as far as that for evidence of Biden’s opposition to legalization.

After easing off his hardline anti-cannabis stance of earlier years, Biden’s evolution, such as it is, came during the Obama administration, when he signaled a willingness to mitigate cannabis penalties but still fell short of endorsing legalization. “I still believe it’s a gateway drug,” he told Good Morning America’s George Stephanopoulos in 2010. “I’ve spent a lot of my life as chairman of the Judiciary Committee dealing with this. I think it would be a mistake to legalize.”

But Most Americans No Longer Believe Cannabis Is a Gateway Drug

While Biden has often tried to position himself as an “average American” who knows what the people really want, his comments are out of step with current public opinion.

The percentage of Americans who think that cannabis should be legal continues to climb, standing at 67 percent in favor of legalization in the most recent major survey from Pew Research Center. Support for legalization among Democrats and Democratic-leaning independents is even higher, coming in at 78 percent. Even Trump voters side with legalization in 49 out of 50 states. Meanwhile, this year’s National Survey on Drug Use and Health (NSDUH) found that cannabis use has been steadily increasing across every state in the country since 2002.

Biden’s appeal to the centrist wing of his party appears more fringe in light of these survey results. Unlike the traditional wisdom among Democrats as recently as 2016 — when Hillary Clinton also promoted a cannabis platform of rescheduling — social justice concerns have come to dominate the cannabis reform conversation in a way that make half measures such as the one Biden suggests untenable.

There’s No Solid Evidence Cannabis Is Actually a Gateway Drug

As for convincing evidence of any truth behind the Gateway Theory, it remains scant. According to the Centers for Disease Control and Prevention (CDC), “The majority of people who use marijuana do not go on to use other, “harder” substances.”

The theory that cannabis use predictably leads to the use of other drugs was first rejected by Harry J. Anslinger, longtime commissioner of the Federal Bureau of Narcotics and the godfather of the War on Drugs. Eventually, however, it became one of his prime talking points when addressing Congressional committees in the 1950s. Then, backed by a series of longitudinal studies on the phenomenon, the Gateway Theory was repopularized by anti-drug advocates in the 1980s as the Reagan-era War on Drugs gathered steam.

The problems with the research were evident from the start, and still remain today — correlation does not equal causation, and none of the many studies that followed ever found evidence of a psychological or chemical link between cannabis use and that of “harder drugs.” Today, scientists attribute the phenomenon of addiction to a variety of interrelated causes, including:

As the National Institute on Drug Abuse (NIDA) says on its website, “An alternative to the gateway-drug hypothesis is that people who are more vulnerable to drug-taking are simply more likely to start with readily available substances such as marijuana, tobacco or alcohol, and their subsequent social interactions with others who use drugs increases their chances of trying other drugs.”

AOC: Biden Would Make Cannabis a “Gateway to Mass Incarceration”

While the remaining proponents of the Gateway Theory claim to be concerned with protecting vulnerable communities, its opponents see it as a way to justify forms of social control that keep those communities terrified and docile.

Rep. Alexandria Ocasio-Cortez (D-NY) made the connection explicit in an interview with Marijuana Moment:

“[Biden’s comments on cannabis] are Reagan-era talking points that were behind one of the worst and most shameful phases of American policy,” she said. “That rhetoric is rhetoric of mass incarceration. The only thing that marijuana, due to the failures of U.S. policy, is a gateway to is our mass incarceration system.”

The Democrat-led discourse on cannabis reform (which many Republicans believe as well) has largely moved beyond such rhetoric, framing the conversation more in terms of public health, except in discussing the impacts of cannabis policy on communities of color.

It’s here too that Biden’s plan falls short — in a follow-up tweet, he reiterated his plan to reschedule cannabis so that it could be researched more comprehensively, a plan that is in step with Republican-led legislation like the Marijuana 1-to-3 Act. His tweet leads by proclaiming, “No one should be in jail for marijuana use,” and segues into a series of progressive-seeming platform points like the expungement of convictions for cannabis use, the federal legalization of medical cannabis, and the promise that individual states that choose to fully legalize cannabis won’t face federal interference.

But the last point — that cannabis be downgraded from a Schedule I drug with no accepted medical purpose, to a Schedule III drug that occupies the same pharmaceutical rung as Tylenol #3, codeine, and testosterone — has the potential to roll back many of the advances that the cannabis industry has already made.

How Biden’s Plan Could Damage the Cannabis Industry

Much of the progress made by the smaller businesses currently flourishing in the cannabis ecosystem has been made because of the limbo that they exist in. Major corporations have proven averse to the types of risks and uncertainty present, as have financial institutions; the injunction against cannabis crossing state lines has provided another barrier against a few major players dominating the growing industry. While imperfect, access to the industry currently has a lower bar to entry than it would have under Biden’s system.

Making cannabis a Schedule III drug would presumably subject it to the same Food and Drug Administration (FDA) oversight occasioned on other category entries — complete with clinical trials that can take years to complete and cost over $1 billion per product. This could open the door to Big Pharma and cut patients off from the easily accessible medical cannabis now available in 33 states.

“They could put every medical provider in the country out of business in a matter of months,” Dean Heizer, chief legal strategist at LivWell, one of Colorado’s largest cannabis companies, said to Rolling Stone.

When Biden’s plan was first circulated, cannabis firm Grupo Flor chairman Gavin Kogan told VICE, “I view Biden’s plan as a ham-fisted handing over of cannabis to the pharmaceutical industry.”

It would also potentially undue the meager progress that’s been made in opening the cannabis industry to businesses owned by people of color. Later in her interview with Marijuana Moment, Ocasio-Cortez gave a counterpoint to Biden’s platform in describing her support for legislation from Rep. Jerrold Nadler (D-NY) that would federally deschedule cannabis and address the social equity questions that come with such a move.

“The problem is that if we don’t pass a bill with the social elements inside it then we compound on the racial wealth gap, we compound on the same folks who got rich off of private prisons are going to turn around, invest those profits into legal marijuana and we’re going to have the same economic discrimination that we had,” she said.

In my view, any movement away from classifying cannabis as a Schedule 1 drug is a step in the right direction. It’s clear at this point that criminalizing people for cannabis use is wrong, and the authorities know this. However, they’ll prefer to take baby steps until public opinion becomes so overwhelming that they have no choice but to opt for full legalization. This inertia is a bipartisan phenomenon — the Clinton, Bush, and Obama administrations all failed to make meaningful reforms to federal cannabis policies. But as the backlash to Biden’s comments shows, we may be at the verge of a tipping point where such a “wait and see” approach is no longer feasible for any politician who wants to stick around.

Joseph J. Morgan, MD, AACM is a Professor of Cannabis Education at the oldest pharmacy school in the U.S.A., founded as Philadelphia College of Pharmacy in 1822 and now known as University of the Sciences. He is the author of the chapter on addiction in the reference book "Cannabis As Medicine” (CRC Press, Taylor and Francis). He’s also an advisor to Parea Bio Sciences, a grower processor in Pennsylvania, and to Undoo.com, marketer of an antidote for cannabis intoxication. A longtime cannabis industry consultant, he has a patent pending in cannabinoid drug development licensed to Nexien Bio Pharma.