Guam Now Has Legal Recreational Cannabis — Why It Matters 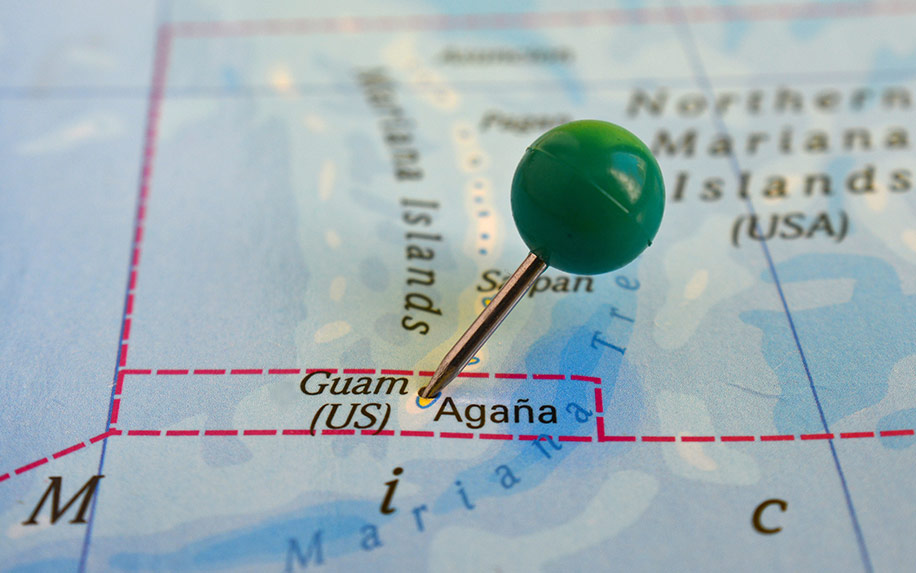 The island of Guam recently became the first U.S. jurisdiction to legalize recreational marijuana. Image Credit: By JoaoCachapa on shutterstock.

Following a now-familiar template, the island of Guam recently became the first U.S. jurisdiction to legalize recreational marijuana in 2019. Pointing to the economic logic of legalization, a bipartisan group of lawmakers in Guam put together a bill that would make recreational cannabis legal for adults 21 and older. After passing through the legislature by a vote of 8 to 7, it eventually got the stamp of Governor Lou Leon Guerrero.

Thanks to this decision, Guam became the second U.S. territory to permit recreational use, joining the Northern Mariana Islands. Previously, Guam voters had approved the legalization of medical marijuana in 2014, becoming the first U.S. territory to do so.

At a press conference introducing the new law, Gov. Guerrero predicted that federal law would soon follow suit. “I think the federal government will make it legal,” she said. “There are [33] states that have medical cannabis. Ten states have adult-use cannabis. That’s the trend. I think the writing on the wall is there.” As more states mull legalization (even in conservative regions like the Midwest) and federal lawmakers put forth bills that would end the national prohibition of cannabis, it appears she has a strong case.

Why Did Guam Legalize Recreational Cannabis?

When freshman Senator Clynton Ridgell (D) introduced the Guam Cannabis Industry Act of 2019, or Bill 32, in January, he did so with the help of five co-sponsors — only two senators short of guaranteeing the bill’s passage. As he told the local Pacific Daily News then, “I think this is something that our island needs right now.”

A major draw in the new law is a 15 percent excise tax, whose revenue will go to law enforcement, drug treatment, and agriculture programs. Government estimates put the market at $36 million per year, which would mean $5.4 million in tax.

Previously, all cannabis sale proceeds had gone to a robust black market, which did a brisk business on the back of loose enforcement and the third-highest rate of use in the world — 18.4 percent of Guam residents between the ages of 15 and 64 use cannabis, according to a report from the United Nations Office on Drugs and Crime. This is something that Guerrero also addressed in saying, “Keeping it illegal in my mind rejects the notion that it exists, and the underground market will continue to prey on it. We have to be ahead of this and we have to control it.”

Because of poor soil quality on the island and the low-THC domestic cannabis strains that grow in it, much of the cannabis sold in Guam is smuggled in from abroad. According to the National Drug Intelligence Center, the Republic of Palau is the chief source of imported cannabis, with smugglers employing ingenious methods such as hiding 5-10 pounds of cannabis in the walls of a cooler holding fish or yams, and then sending it to a relative.

Once on Guam, smuggled cannabis skyrockets in value. According to Drug Enforcement Administration (DEA) data, the cannabis black market responded to street-level enforcement initiatives by doubling and tripling prices in the 1990s, reaching $12,800 per pound in 2002. This premium can jump by nearly 1,000 percent when sold to the 1.3 million Japanese and Korean tourists who travel to Guam every year. Tourists from these rigidly anti-cannabis countries have been known to spend $150–200 on one machine-rolled joint — the going rate for locals stands at $20.

The bill reclassifies cannabis, moving it out of Schedule 1 and redefining references to it in the Guam Uniform Controlled Substances Act. It will also answer the question “Is weed legal in Guam?” more definitively than its sister legislation of 2014, which had required testing medical cannabis in laboratories that were never built, thereby limiting practical access to the medicine it theoretically legalized.

Public consumption will be off limits, but it will be legal for those 21 and up to buy, possess, and sell marijuana in quantities of one ounce or less. Sen. Ridgell said the new bill borrows its rule-making from other states and territories which have legalized, such as California, Colorado, and the Northern Mariana Islands.