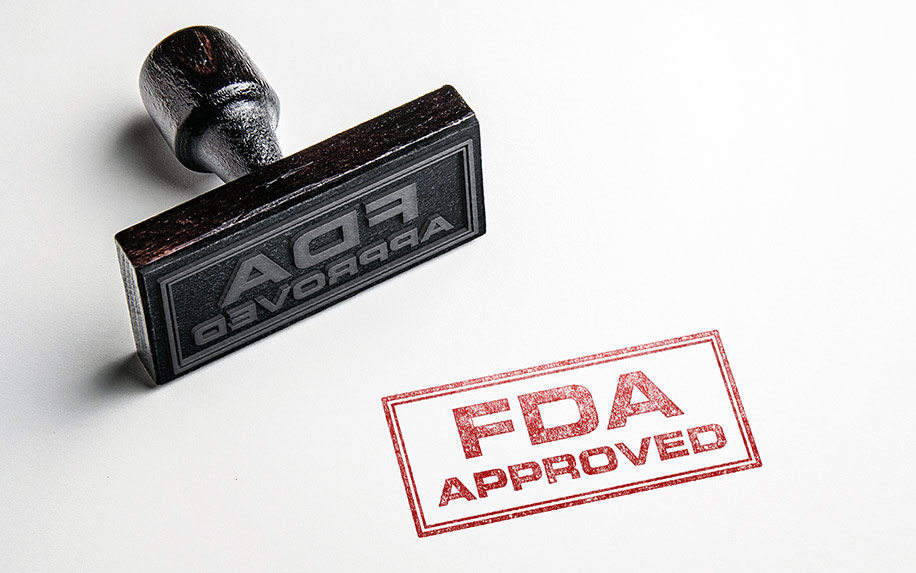 Image Credit: By Castleski on shutterstock.

The Food and Drug Administration (FDA), a federal agency in the United States, approved cannabidiol (CBD) oil. CBD oil is a derivative of the Cannabis sativa plant (also commonly known as marijuana). CBD does not cause euphoria or the high associated with smoking pot. The “high” comes from another compound in the cannabis sativa plant which is called tetrahydrocannabinol (THC). It is the THC that acts as the psychoactive component in the cannabis plant.

The Food and Drug Administration (FDA) is responsible for protecting the United States citizens by controlling and supervising the safety of food, drink, dietary supplements, tobacco, OTC drugs, medical devices, beauty cosmetics and animal related food and medical products. Doctors in the United States can prescribe any FDA approved drugs as they see fit.

Epidiolex is a strawberry-flavored syrup that is a purified form of a chemical ingredient found in the cannabis plant. It is produced and developed in Britain by a company called GW Pharmaceuticals. Epidiolex is used as a treatment for seizures associated with epilepsy. GW Pharmaceuticals had to overcome a numerous amount of legal hurdles in order to conduct their research. Thanks to their determination they are now able to make their drug from cannabis plants that are specially bred to contain high levels of CBD and low levels of THC.

Dr. Orrin Devinsky of NYU Langone Health Comprehensive Epilepsy Center stated that medical cannabis “represents a new chapter, a landmark for therapy in the U.S. for epilepsy, and now many of these children and young adults have significant reductions in their most severe and dangerous seizures.” Epidiolex is expected to significantly improve the quality of life for epilepsy patients.

Epidiolex (essentially a pharmaceutical grade version of cannabidiol) contains less than 0.1% of THC, making it different to medical marijuana which contains higher levels of THC.

The Drug Enforcement Administrations Controlled Substances Act puts cannabis up at the very top as being a Schedule I drug. Up until now, CBD has been seen to have no medical value classed as an abusive substance. Cannabis is ranked alongside drugs like heroin, ecstasy, and LSD in this act. However, this looks likely to change now.

The FDA Commissioner Scott Gottlieb MD announced the approval of Epidiolex on June 25 during a press release. On that day Gottlieb stated that,

the FDA is prepared to take action when we see the illegal marketing of CBD-containing products with serious, unproven medical claims. Marketing unapproved products, with uncertain dosages and formulations can keep patients from accessing appropriate, recognized therapies to treat serious and even fatal diseases.

Lennox-Gastaut Syndrome (LGS)
Children with LGS start to have continuously reoccurring seizures during their childhood. Children diagnosed with this condition struggle to develop properly both educationally and intellectually, resulting in disabilities in these areas. Further to this, due to the actual seizures themselves this can also lead to problems with motor functions. Three quarters of children with Lennox-Gastaut syndrome suffer with tonic seizures. Tonic seizures result in muscles contracting uncontrollably which can result in chronic pain.

These are two of the most rare and severe forms of epilepsy. Due to the lack of resources and medical treatment, children and adults with theses rare syndromes don’t have the best quality of life. An estimated 30,000 people suffer from LGS. This is an even smaller number than those with Dravet syndrome.

A study was carried out on Epidiolex in a randomized placebo controlled trial. The study that took place involved over 500 patients with Lennox-Gastaut syndrome or with Dravet syndrome. In the study, people with these syndromes were given Epidiolex along with their other prescription drugs and medication. This clinical trial showed that Epidiolex was successful in reducing seizure frequency compared with the placebo.

Before it was difficult to imagine the possible future of cannabis as a medical drug, but after this approval by this chemically engineered synthetic version of CBD, things are really looking good for this little plant. For the foreseeable future, Which will allow more companies like GW pharmaceutical to grow and test the plant under strict guidelines but without the large amount of legal hurdles to confront and bypass. It also means that CBD manufacturers no longer have to live in a very grey area when dealing with the drug.

Up until now it was difficult to imagine the possible future of cannabis as a medical drug. However, after the approval of this chemically engineered synthetic version of CBD, things are really looking good for this little plant and for those that could benefit from its medicinal powers. In the foreseeable future, CBD will be destigmatized and categorized as either a Schedule class 2 or even a scheduled class 3 drug. DEA public affairs officer Barbara Carreno stated: “We don’t have a choice on that, it absolutely has to become Schedule 2 or 3”.

This will allow more companies like GW pharmaceutical to grow and test the plant under strict guidelines without the many legal hurdles to confront and bypass. It also means that CBD manufacturers no longer have to work in a legal grey area when dealing with the drug. In short, it will lead to even more cannabis-based drugs being approved by the FDA.

It should also lead to major improvements in CBD product regulation across the board. Regulation has been a huge problem up until now. A study that was conducted back in 2017 tested 84 products purchased from 31 different online CBD sellers.

discrepancies between federal and state cannabis laws have resulted in inadequate regulation and oversight leading to inaccurate labeling of some products.

Findings from the study found that:

The approval of Epidiolex is exciting news for people suffering from epilepsy, but its has many more far reaching consequences than many people might think. Not only will it benefit those suffering with Gastaut syndrome and Dravet syndrome, it will benefit anyone who currently uses CBD products and anyone who hopes to in the future. Who knows, in a few months time we could see the approval of cannabis-based drugs for Alzheimer’s Disease, Parkinson’s Disease, or Multiple Sclerosis. It really is the start of a new era.