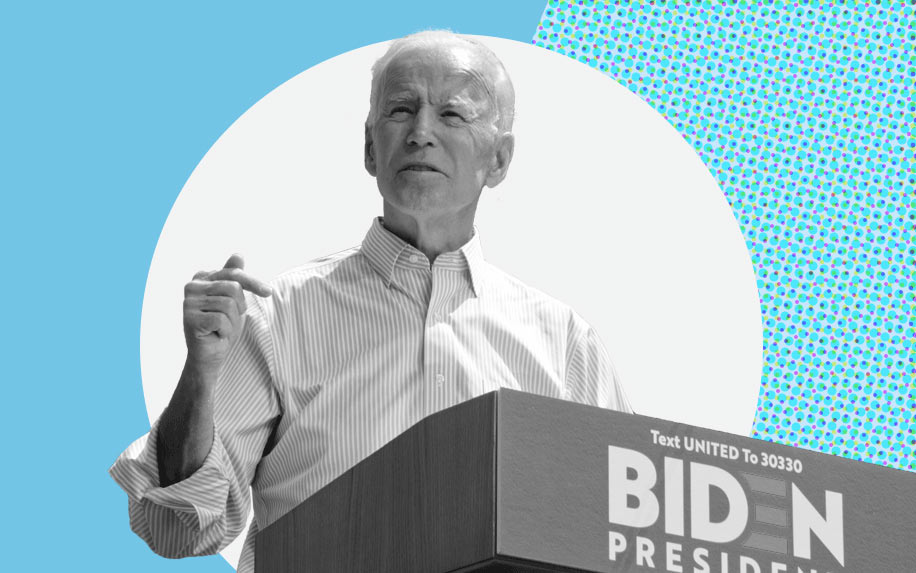 Biden went on record as recently as 2012 opposing cannabis legalization, but he may be softening his stance. Image Credit: By cannabisMD.

Back in June when Joe Biden made a campaign stop in New Hampshire, the site of the nation’s second primary contest, he made a statement on cannabis that was at once progressive (compared to his previous stance) and fairly conservative (compared to every other Democratic candidate).

“Nobody should be in jail for smoking marijuana,” Biden said from the stage.

He didn’t elaborate on that idea, however, and nowhere on his campaign website does Biden address cannabis. So it was left to campaign spokesman Andrew Bates to expand on the former vice president’s position.

“As he said [Tuesday], Vice President Biden does not believe anyone should be in jail simply for smoking or possessing marijuana.” Bates told CNN. “He supports decriminalizing marijuana and automatically expunging prior criminal records for marijuana possession, so those affected don’t have to figure out how to petition for it or pay for a lawyer.”

Bates pointed to a state’s rights-centric plan, which would incrementally push the cannabis reform agenda forward under the noninterference policy articulated by the Obama administration’s Cole Memo. “He would allow states to continue to make their own choices regarding legalization and would seek to make it easier to conduct research on marijuana’s positive and negative health impacts by rescheduling it as a Schedule II drug,” Bates said.

While responses to Biden’s one-campaign stop cannabis comments varied — some found his plan ineffective, while others thought it was disingenuous — a third take has been circulating online.

If Biden’s rescheduling of cannabis was to be enforced — a possibility after so much federal inaction on the subject — it would push cannabis into the purview of the Food and Drug Administration (FDA), which hasn’t traditionally been friendly to the types of businesses that populate the legal cannabis ecosystem.

“To the extent that FDA regulation always favors bigger companies that can afford to meet the regulations, then, yes, putting cannabis in Schedule II would be a sort of Big Pharma model,” David Herzberg, a historian at the University at Buffalo who specializes in drug policy, told VICE.

What’s more, this plan could jeopardize the social justice platform that Biden’s leaned more heavily into. While some states with legal cannabis programs, such as Illinois, have prioritized remedying past injustices, Biden’s plan left little room for righting historical wrongs. “There’s no way this [plan] will ever go far enough to remedy the damages these communities of color have suffered,” cannabis entrepreneur Solonje Burnett told VICE. She added that the “half measure” could put him on “the wrong side of history, again.”

Biden’s Past Views on Cannabis: Cause for Concern Among Advocates

As cannabis reform approaches a tipping point in the upcoming election, National Organization for the Reform of Marijuana Laws (NORML) executive director Erik Altieri gave a damning statement to Rolling Stone — anyone would be better than the current Democratic frontrunner.

“Biden’s views are far out of step with the American public and he holds the worst record on cannabis-related policy of any individual currently running for the Democratic or Republican nomination,” he said.

Altieri isn’t alone in this characterization. Michael Collins, the director of national affairs at Drug Policy Action, told Rolling Stone that Biden was “the architect, in all ways, of the war on drugs.”

“He embraced the war on drugs. He seized every opportunity he had. He really leaned into escalating it,” he said.

In 1982, Biden campaigned for the creation of the executive office of “drug czar,” which eventually led to the establishment of the Office of National Drug Control Policy in 1989. He was key to the drafting of the 1994 crime bill which contributed to the country’s non-violent drug offender incarceration glut. He’s even called for the death penalty for cannabis dealers.

Drug Policy Action’s Collins, for one, doesn’t think Biden’s about-face is genuine. “I think he’s thinking, ‘this is something Democrats endorse and now I have to,’ and he will say something mealy-mouthed to get by,” Collins said.