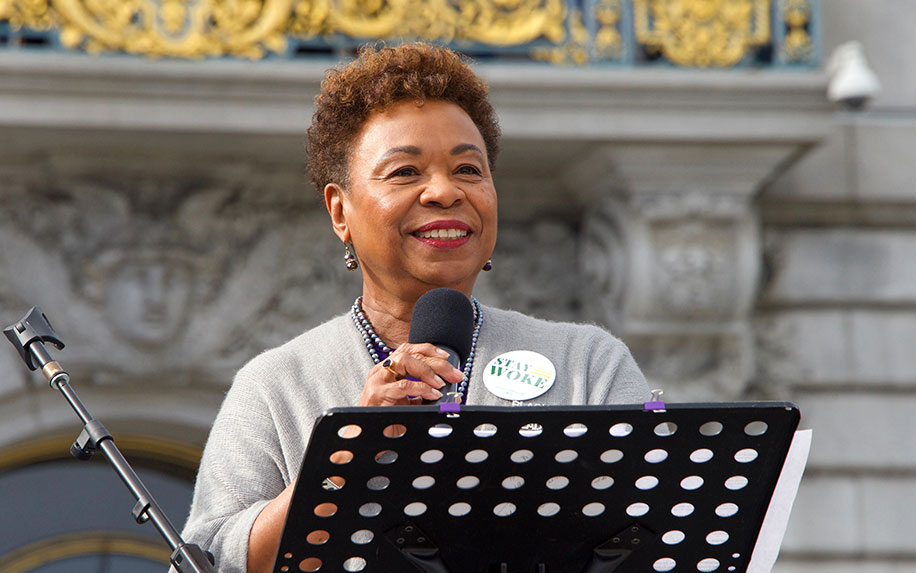 Rep.Barbara Lee, pictured, is the first woman of color to lead the U.S. Cannabis Caucus. Image Credit: By Sheila Fitzgerald on Shutterstock

Against a background of breakneck cannabis reform across the U.S., it sometimes seems that the federal government is being willfully obstructive on the issue. That’s why it may come as a surprise to some that Congress has a Cannabis Caucus, which worked through the government shutdown earlier this year on an outcome that they have been advocating for since 2017. Now, their ranks have been bolstered by one of the most respected politicians in the country, as longtime congresswoman Babara Lee (D-CA) becomes the first woman of color to co-chair the caucus.

Lee will be working alongside some of the nation’s most vocal pro-cannabis lawmakers, including Rep. Earl Blumenauer (D-CO), who presided over the launch of the Congressional Cannabis Caucus during the 115th Congress, and later re-constituted it during the 116th Congress to replace departing members Rep. Dana Rohrabacher (R-CA) and now-Colorado Gov. Jared Polis (D-CO). In a press release announcing the caucus’s new members, Blumenauer issued a de facto mission statement for the caucus:

“The Cannabis Caucus was the first of its kind to create a forum for elected officials to collaborate on ways to address our outdated federal marijuana laws. Congress is clearly out of step with the American people on cannabis when national support for federal marijuana legalization is at an all-time high, and we saw several states move toward legalization last November.”

According to Blumenauer, the caucus is determined to “build on the bipartisan work we’ve done to end the senseless federal prohibition on marijuana once and for all.” With support for more cannabis research growing among Republicans, and bold plans for federal legalization spearheaded by Blumenauer and other Democratic lawmakers, this may be one of the rare issues where America’s dueling political parties can reach an agreement.

Who’s in the Cannabis Caucus?

Alongside returning members Blumenauer and Rep. Don Young (R-AK), the newest members to join are Lee and Rep. David Joyce (R-OH), an important Republican voice in the reform movement.

Now serving his 24th term in Congress, Young is not only the most senior Republican congressman but also the Dean of the House. With his support, Alaska legalized recreational cannabis in 2014, becoming the third state to fully legalize the plant.

Blumenauer is on Congress’s Ways and Means Committee, which controls all revenue-raising measures including taxation and tariffs. The committee has jurisdiction over some aspects of cannabis law, particularly the treatment of cannabis businesses under the tax code. Under the current tax code, businesses engaged with the still federally-illegal substance are barred from claiming standard business deductions. Addressing this issue is high on the list of the cannabis industry’s priorities, according to the National Law Review.

Incoming members Lee and Joyce are both members of the Appropriations Committee, which controls the federal budget. Historically, lawmakers have used the appropriations process to advance legislative goals relating to cannabis. Most notably, the Rohrabacher-Farr amendment — which was co-signed by former Cannabis Caucus co-chair Dana Rohrabacher — prohibited the Justice Department from interfering with states implementing their own cannabis laws. With Rohrabacher no longer in Congress, Joyce is set to be a key Republican voice in this policy area, and his role on this committee will be especially important in the efforts to reform cannabis law.

In addition to her place on the Appropriations Committee, Lee is the first woman and first person of color to co-chair the caucus. In her introductory statement, she said “communities of color and women have been left out of the conversation on cannabis” for too long.

In 2017, Lee introduced the Marijuana Justice Act with Sen. Cory Booker (D-NJ), which has a strong focus on the social justice issues intertwined with cannabis inform. She also authored the REFER Act last year, to prohibit federal funding for Department of Justice interference in states that have decriminalized cannabis, and the RESPECT resolution, which encourages racial equity in the legal cannabis industry.

What Does the Cannabis Caucus Do?

Excited to have @RepBarbaraLee & @RepDaveJoyce join @repdonyoung and I on the Cannabis Caucus leadership team! We’re working to: End senseless prohibition, ensure restorative justice for those impacted by the war on drugs, advance research, expand access to vets, — Earl Blumenauer (@repblumenauer) January 9, 2019

In these four points, Blumenauer addressed the main reasons that the bipartisan base of support behind the Cannabis Caucus is working to harmonize federal laws that prohibit recreational and medical marijuana use with state laws that permit it.

The co-chairs of the caucus have considered cannabis legalization a states’ rights issue from the start, and are working through federal channels to increase medical research into cannabis and change regulations on banking and taxation for cannabis businesses.

Joyce appealed to fellow Republicans in his introductory statement, which drew attention to the ways that the federal government has interfered with state decisions on cannabis, saying:

“It is critical that we protect the rights of the states across the country, like Ohio, that have already done so at the state level. The federal government’s interference in this arena has stifled important medical research, interfered with doctors and patients making treatment decisions and harmed state-legal businesses.”

Joyce is co-sponsoring the Strengthening the Tenth Amendment Through Entrusting States (STATES) Act, which would federally recognize the authority of states which have enacted cannabis legalization.

Young added, “The idea of states’ rights has been a central tenet of this movement and one that I believe will ultimately carry the day. I encourage all members to join us in this debate and explore the varying issues.”