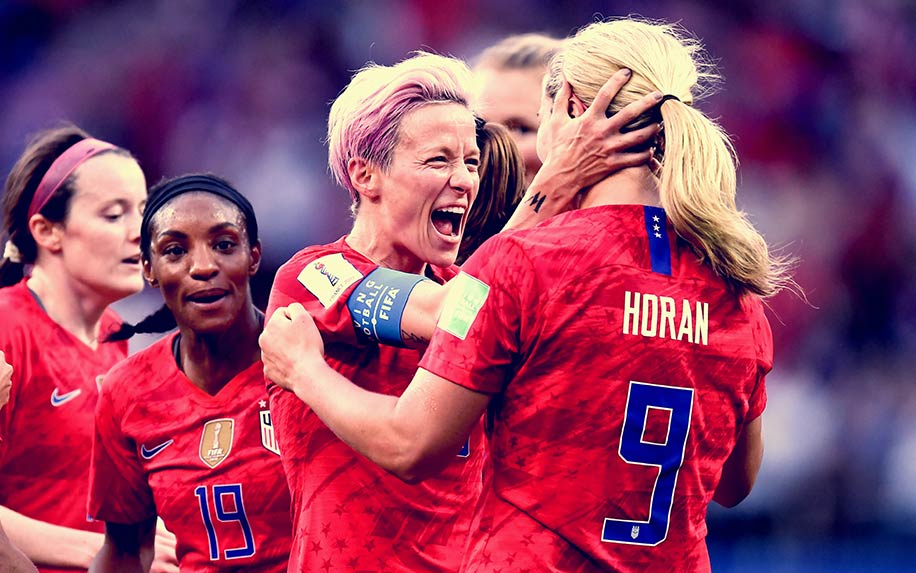 By the time Rachel Rapinoe was 21, the former soccer star had taken more painkillers than she cared to remember. “I remember feeling addicted to opioids and thinking: that’s probably not good,” she says. But back then, there weren’t a lot of alternative ways for athletes to deal with the daily grind, so Rapinoe decided to make her own.

Now 34, Rapinoe is the founder of Mendi, a recovery-focused CBD company designed specifically for high-performance athletes. It’s already attracted some high-profile fans — like Rapinoe’s sister Megan, the heroine of the 2019 Women’s World Cup and Sports Illustrated’s Sportsperson of the Year (and Mendi’s first official brand ambassador).

Rapinoe’s inspiration for the brand came from personal experience. Like most athletes, she’s suffered her fair share of injuries. “I’ve had multiple surgeries, and been through rehab,” she says. Each time, she was given high-powered (and highly addictive) painkillers to help her get back on the pitch — which was just business as usual in the sports world.

“You don’t think anything of it, you’re getting them from your doctor,” Rapinoe says. “And certainly no one is thinking about how you should manage your pain with pot.”

She probably wouldn’t have tried it, anyway. Back in her playing days, Rapinoe was no fan of cannabis. “I had no idea about the positive effects of it; I bought into all the propaganda,” she says. But when some athletes she really trusted and respected started using cannabis for pain relief, she decided to take a second look at what all the fuss was about.

As Rapinoe explains it: “I saw other athletes managing their pain with gel capsules, edibles, vape pens. That completely flipped my whole mindset on what marijuana actually is.”

CBD: A Safer Alternative to Opioids for Athletes?

After her epiphany, Rapinoe didn’t jump into the cannabis business right away. Instead, she started experimenting with different doses, delivery methods, and cannabinoid formulations on herself.

Eventually, she met one of her future Mendi cofounders, Kendra Freeman, who has a cannabis background and owns an organic cannabis farm. Before long, they were joined by Mendi’s third cofounder, a designer and former athlete named Brett Schwager. Looking around at the crowded CBD market, they saw an open niche — there weren’t a whole lot of companies aiming to provide athletes with safer, healthier recovery tools.

“We want to protect athletes and the place we think we can do that is through the CBD business,” Rapinoe says.

There’s an undeniable need for what she’s selling. The number of deaths related to opioids has risen from 8,048 in 1999 to over 47,600 in 2017, according to data from the Centers for Disease Control and Prevention (CDC) — and studies have shown that athletes are particularly at risk for opioid dependency, which often leads to heroin use.

In fact, Jack Riley, the Drug Enforcement Administration’s (DEA) Chief of Operations, once said, “In the athletic arena, if anything can be likened to a weapon of mass destruction, it’s heroin. It is that pervasive now.”

Scientists are still trying to pin down CBD’s real pain-fighting abilities — initial studies show it can be effective against arthritis and other types of chronic pain, though more research is needed — but one thing’s for certain: it’s less harmful than opioids. In early 2019, the World Health Organization (WHO) recommended removing CBD from the international list of banned substances, saying it had “no potential for abuse and no potential to produce dependence.”

But Mendi wasn’t founded just to give athletes an alternative to pain pills —Rapinoe and her cofounders also saw an opportunity to cater to the unique needs of high-performance competitors.

That meant upping the dose, for one thing. “There are too many products on the market with such low dosages that it’s not going to work,” says Rapinoe, noting that Mendi’s baseline dose for edibles is 25 mg of CBD per dose, while their topical products contain a minimum of 500 mg per bottle.

It also meant making sure Mendi’s products are 100 percent THC-free. According to Rapinoe, products on the market that have not been properly tested can contain levels of THC that could lead to a failed drug test. That’s why they decided to formulate their products with CBD isolate instead of a full spectrum extract (despite the fact the latter is widely believed to be more effective).

As Rapinoe explains, “We are a huge champion of full spectrum extracts, but we found very quickly [through focus groups] that the stigma of cannabis in sports and the fear of testing positive for THC is just too scary.”

Today, Rapinoe and her sister rely on CBD as an alternative treatment for all sorts of sports-related health woes, including general inflammation after a workout. Sleep is also a big one.

“A lot of our athletes say the number one thing they’ve noticed is that [CBD] helps with sleep at night,” says Rapinoe.

On top of creating a female-led business that champions diversity, equality, and feminism, the Mendi team plans to work to increase athletes’ access to all types of cannabis therapies, including those involving THC.

“I think there’s definitely a place for THC in sports,” says Rapinoe.“There should be no reason why an athlete can’t smoke a joint but they can pop a vicodin. That’s absurd.”

It does look like some progress is being made. Major League Baseball recently removed THC from their “drugs of abuse” list, and will instead by testing for opioid abuse. According to Rapinoe, “THAT makes the most sense.”

In the meantime, Rapinoe and her team are hoping that the Food and Drug Administration (FDA) hurries up with CBD regulation — and that the federal government’s recent decision to relax restrictions on cannabis research means we’ll finally be able to discover all that the plant has to offer.

As Rapinoe explains it, “There’s a lot we still don’t know and that falls on our government. And they’ve done a bad job providing knowledge to the public.”