How (and Why) to Add CBD Oil to Your Bath 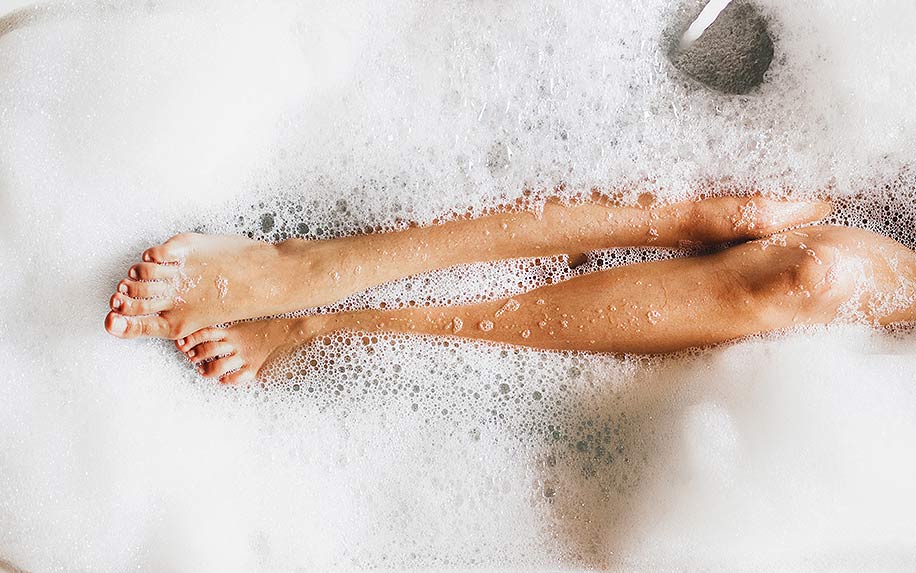 Chocolate and peanut butter. Warm sun and a cool breeze. Baths and CBD oil — all lovely things that become even lovelier when mixed together. And while it may be impossible to control the weather (or the occasional craving for a Reese’s), CBD-infused baths are an indulgence that can be enjoyed on demand, and they’re actually good for your health.

Hot baths have been a cherished part of Finnish, Japanese, and other cultures for centuries, and modern science has confirmed that they have a startling range of health benefits. For one, they can help you breathe easier (both by boosting your oxygen intake and clearing your sinuses). They can also enhance your immune system by increasing circulation, killing bacteria, and soothing the symptoms of common illnesses like the flu. Some researchers even suggest that baths could increase the brain’s production of serotonin, commonly known as “the happiness hormone.”

Adding CBD oil to the mix can make a good thing even better. For one, it’s great for your skin: studies have shown it’s rich in antioxidants which can reduce the appearance of wrinkles and minimize other signs of aging. It also contains fatty acids that can help strengthen the skin’s protective barrier, keeping it moisturized and vibrant.

While baths and CBD oil both bring their own benefits to the table, they also overlap in one major way: busting stress and anxiety. Taking a long hot bath has become an immediately recognizable trope in movies and TV shows — when the main character sighs and sinks into the tub, it’s a sign that she’s finally relaxed. This isn’t a matter of writers taking creative liberties, as there’s scientific evidence that baths do consistently have this effect: a 2018 survey by Japanese researchers found that over 80 percent of people reported “sensations or feelings of warmth, relaxation, relief from fatigue, and refreshment” after taking a hot bath.

CBD has also risen to prominence largely thanks to its ability to relieve anxiety, and while it’s debatable whether many CBD bath products contain enough of the titular ingredient to get the job done, the placebo effect can be a powerful one.

How to Add CBD Oil to Your Bath

Although it’s generally not recommended to add CBD oil directly to bath water (it would take a large and expensive amount of oil to have any noticeable effect), specially-made CBD bath products abound, each with their own advantages and drawbacks. Here are some of the most popular:

Bath bombs have made quite a splash in the beauty world thanks to their bright colors, pleasing fragrances, and ease of use — just toss them in the tub, sit back, and relax. CBD-infused bath bombs have all of the same benefits, along with the potential to soothe anxiety. Here, the word “potential” is doing a lot of work: many CBD Bath Bombs contain around 50 mg of the titular ingredient, which might not be enough to have anti-anxiety effects. Others can contain over 200 mg of CBD, but there’s still no scientific consensus on what the minimum viable anti-anxiety dose should be for bath products.

Sometimes called “bath soaks,” these products have been around for centuries — anyone who played “Oregon Trail” as a child may remember Epsom salts as one of the available medical treatments. Commonly used to relieve muscle aches and joint pain, CBD bath salts are even more potent than their predecessors, thanks to CBD’s natural anti-inflammatory abilities. Depending on the other oils they contain, however, some products have been known to leave a great deal of residue behind after a bath, so they might not be the best option for those who prefer a sparkling tub.

From a strictly practical perspective, these may be some of the most effective CBD bath products available. CBD shampoos and conditioners can promote hair growth and protect the scalp, while CBD soap is a quick and easy way to give your skin an antibacterial and anti-inflammatory boost (you can also make your own, if you’re so inclined). On the other hand, if relaxation is what you’re after, these don’t have quite the visual appeal — or the connotations of indulgence — as some other products.