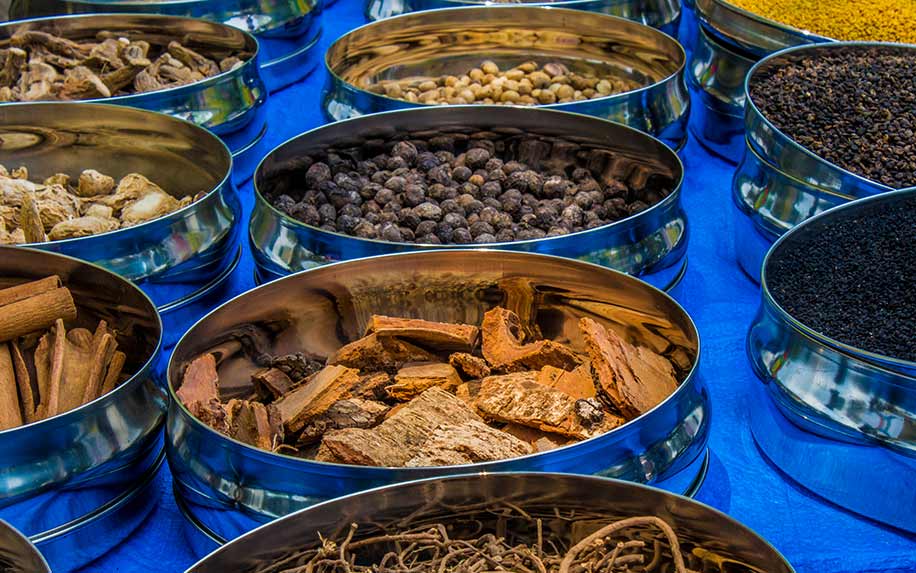 Cannabis and Ayurveda work hand in hand, but how is the next question. Image Credit: By lakshmipathilucky on Shutterstock

Ayurveda and cannabis have become increasingly popular independently in recent years, but people have actually been using them to complement each other for millennia. Ayurvedic medicine draws heavily on the healing powers of various medicinal herbs, and new studies are giving scientific confirmation to what many have long suspected: cannabis may be one of the most versatile herbs of all.

While interest in both cannabis and Ayurvedic medicine is steadily growing, many are still unsure how — or if — they can be used together. This is partly due to the global demonization of cannabis (which is rapidly fading as more countries legalize the plant), but it’s also because people simply don’t know much about Ayurveda in general. It may come as a surprise, then, to see just how closely they’re entwined.

So, we’ve compiled a list of facts to help introduce you to the concepts (and the science) behind both, why they’ve been combined, and the ways that you can incorporate them into your self care regimen.

Little-Known Facts About Cannabis and Ayurveda

1. Ayurveda Medicine Is More Than 5,000 Years Old
It was founded in India and is the oldest health-care system (that’s still practiced) in the world

2. Ayurveda Is All About Balancing the Doshas
People who practice Ayurvedic medicine believe that each person is made up of three doshas, or three vital energies. The balance or imbalance of these doshas is largely what dictates whether a person is healthy or unhealthy. They are called the Vatta dosha, the Pitta dosha, and the Kapha dosha.

While these doshas are present in everyone, Ayurvedic doctors and practitioners believe that each person has a unique mix of the three, which can change depending on their circumstances and experiences. The ultimate aim of the practice is to balance them for optimal physical, emotional, and spiritual health.

3. Cannabis Is Integral to Traditional Medicine
Contrary to what some people believe, the cannabis plant hasn’t always been seen as an illicit drug that needs to be controlled. For centuries it was used as a traditional medicine in many parts of the world including India, China, and the Americas. As well as being used to treat medical conditions, it was seen as a spiritual tool which could help its users connect to a higher power.

In Ayurvedic texts dating back to the Middle Ages, cannabis is cited for its healing properties, and many people still use it in meditation today for this reason.

4. Oils Are Essential in Ayurveda
Herbal oils are integral to Ayurvedic medicine, with their medicinal qualities being used to treat a wide variety of ailments. Modern science has confirmed that many of these — such as sesame and coconut oils — have significant health benefits. Now, cannabis-derived oils are getting a similar treatment. Researchers have delved into the many properties of CBD oil in particular, which is extracted from the cannabis plant, and their studies show that it can be useful in the treatment of chronic pain, inflammatory diseases, mental illness, common skin complaints, and more.

5. Cannabis Is Being Used in Ayurvedic Massage
According to practitioners, Ayurvedic massage is not only a path to short-term relaxation, but also a technique to support the long-term health of the mind, body, and spirit. While it generally entails the use of heated oils, music, and bodywork, some therapists are now offering treatments that incorporate CBD oil, citing its potential to relieve the symptoms of anxiety, among other issues.

6. Ayurvedic Medicine Is Not FDA-Approved
Despite the name, this type of traditional healing isn’t actually approved by the Food and Drug Administration (FDA), nor has the agency sanctioned the majority of the treatments or products which claim to be Ayurvedic. In fact, the FDA has banned some such products from the American market because they were found to contain toxic chemicals and metals, and has urged caution when using Ayurvedic products.

“Consumers need to be on guard when purchasing any product using the Internet, especially medical products [such as] Ayurvedic products,” according to Mike Levy, the FDA’s Director of the Division of New Drugs and Labeling Compliance.

7. Prominent Figures Are On Board With Both
Ricky Williams, the former NFL running back who made headlines when he left the sport at the peak of his prime, was once the self-described “poster child for marijuana.” These days, he’s still an avid cannabis consumer, but his post-retirement path has also led him to Ayurveda. When asked by the New York Times why he came to the tradition, he said, “At the core, we’re all spiritual beings. It’s something I had been pushing down my whole life. The search for meaning, I guess, the whispering of the soul.”

Williams isn’t the only one to embrace Ayurveda, cannabis, or both. Prominent figures like Gwyneth Paltrow (who now offers CBD-infused products through her Goop beauty brand) and Martha Stewart (who’s now selling CBD pet treats) are also on the record as avid fans — and if recent events are any indication, that list may grow longer yet.