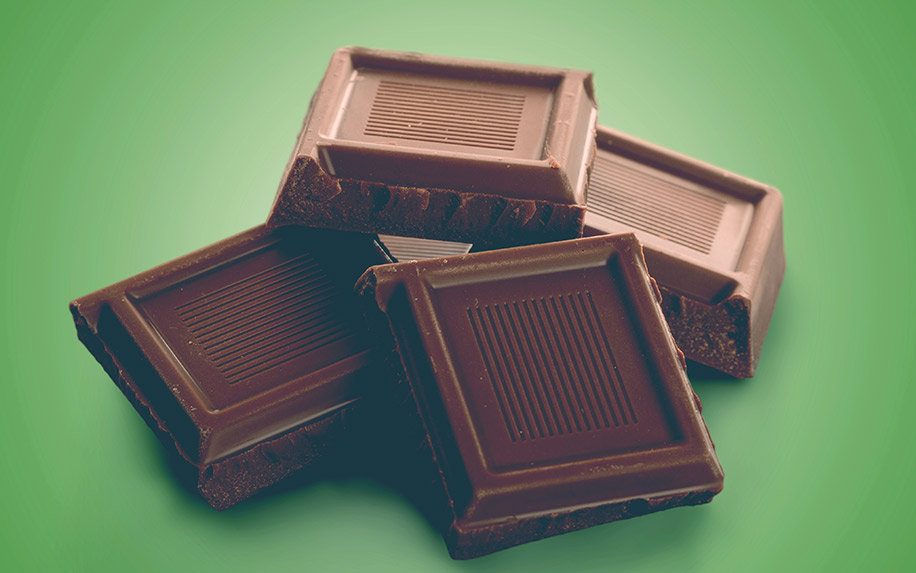 Americans love their chocolate — and recently, they’ve especially loved it when cannabis is involved. According to the research firm BDS Analytics, cannabis chocolates are one of the main drivers behind the explosive growth of the North American edibles market, which is forecasted to be worth more than $4.1 billion by 2022. However, a new study suggests that these popular confections might come with a major catch:

Chocolate can “mask” the real levels of THC in a product, which means they might be much more potent than what the label says.

According to research presented at a recent American Chemical Society conference, this is due to something called the “matrix effect.” Essentially, this means that the more chocolate a product contains, the more it interferes with a test’s ability to determine how much THC is in the product. This puts scientists in an unusual position where smaller sample sizes actually lead to more accurate results.

Dawson believes the culprit behind this confusion might be a familiar one: Fats. Cannabinoids like THC are fat-soluble, meaning they dissolve in it (which is one reason another such compound, CBD, works better when taken with fatty foods). As a result, it’s possible that the THC could “melt” into the chocolate during testing, which would interfere with the equipment’s ability to deliver an accurate reading.

So if you’ve ever eaten a cannabis brownie that supposedly had 10 mg of THC and felt much higher than the time you ate a couple THC gummies with the same amount, now you know why. But just how big of a problem is it?

Inaccurate THC Levels in Cannabis Chocolate: What Businesses and Consumers Need to Know

Dawson himself is hoping that his research doesn’t spark a mass panic. “First and foremost, the findings of my research pose no threat to public safety,” he told Healthline. “It is much more a quirk of analytical testing than it is something that consumers have to be wary about.”

However, his findings do raise some thorny questions for people who enjoy edibles — and even more so for the companies that make them.

Consumers Shouldn’t Be (Too) Worried About Cannabis Chocolate Use

Concerns about cannabis edibles and their unexpected potency are nothing new. Last summer, three tourists were found unconscious in a Martha’s Vineyard restaurant after eating a cannabis candy bar, and similar reports have been trickling out from states like Colorado and California for years. But while much of the furor thus far has focused on the risks posed to cannabis novices — who are unaware that edibles take quite a while to kick in, and can deliver a wallop when they do — Dawson’s research reveals that even people who consider themselves experienced users might be (literally) biting off more than they can (figuratively) chew.

While the side effects of cannabis are generally mild, consuming too much THC can be a major problem for some people — especially if they have no idea what they’re getting themselves into. As the science outlet Phys.org explained, “A chocolate labeled as 10 milligrams of THC could have far more and send someone to the emergency room with hallucinations.”

This is likely to come as disturbing news to many cannabis edible aficionados, especially those who enjoy indulging in the high-end infused chocolates offered by brands like Kiva and Défoncé. Blending chocolate and cannabis — whether in the form of truffles, cookies, or other inventive desserts — has become one of the hottest trends in gastronomy, and the possibility of an unintentional “overdose” is one that most foodies would probably prefer to avoid.

Fortunately, there are a number of ways to make an unpleasant cannabis high less intense (though they vary in terms of effectiveness), and as long as consumers avoid scarfing down an entire sleeve of chocolate chip cannabis cookies, this is probably an issue they can handle without too much trouble.

Cannabis Chocolate Businesses, on the Other Hand, Might Have to Worry

For the makers of chocolate-rich cannabis edibles, the results of Dawson’s research are a bit more problematic.

Each state where cannabis is legal sets its own requirements for compliance testing, which are intended to ensure that any cannabis products that make their way into consumers’ hands meet a series of benchmarks for safety and purity. While these can vary widely from state to state — in Oregon, for example, products aren’t required to be tested for heavy metals, while such tests are mandatory in neighboring California — one requirement that is universal is an accurate description of the product’s THC content.

Due to the inherent difficulties in testing cannabis products, companies do have a surprising amount of wiggle room in this regard. For example, California state regulations dictate that a product whose real THC content is within 10 percent of its stated amount is eligible to hit the shelves. To illustrate, a cannabis cookie that’s marketed as containing 10 mg of THC would be fine if it turned out to have 11 mg, though it would fail if it had 12 mg.

If a product does turn out to have too much THC, the implications can be costly. Most states require that the products be relabeled — which, considering the amount of mandatory safety packaging required, can be a costly endeavor — or destroyed, which obviously deals a major blow to the company’s bottom line. If the batch of products is big enough, and the company is small enough, this could even be a fatal one.

However, in the short term, Dawson’s discovery is unlikely to put any edible manufacturers out of business. Since state agencies rely on the same apparently-inaccurate tests whose shortcomings were exposed by his study, there’s not yet a reliable way for ensuring chocolate doesn’t “juke the stats” for THC compliance testing. But better tests will be coming before long, and when they do, the implications could be bitter for brands — and sweet for consumers.