What It’s Like To Open America’s First Cannabis Café 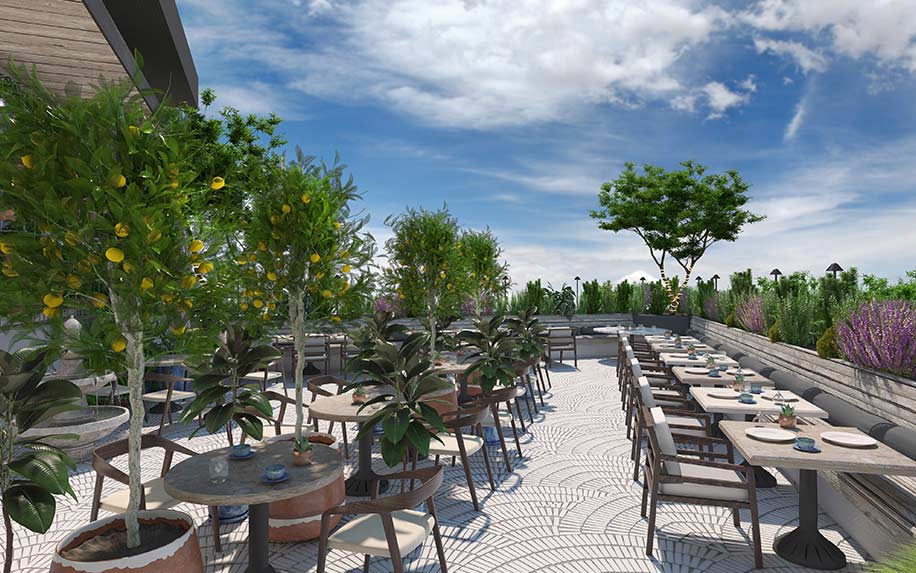 Later this month, Chef (and cannabisMD food editor) Andrea Drummer will open the nation’s first cannabis café, Lowell Farms, with her partners in West Hollywood. This is part one of a series where she chronicles her experience.

On day one, I toured the café with my partners, stepping through a time warp into a space that had once been a local beer garden. My first impression was, “Wow, that’s a lot of wood,” — wooden floors, wooden shelves, wooden seating, wooden stumps inside wooden cubby holes. There was even a wooden bar that held bottles of rye encased in plexiglass. A sense of oldness pervaded the place: I could picture the patrons of the past laughing gregariously as they saluted each other with half-empty beer mugs over grease-stained plates of bratwurst and potatoes.

We ventured onto the sun-drenched patio (all the seats were made of wood, of course) and ambled past the weathered slats (wood again) that encircled its perimeter, which had once offered privacy to the drinkers and diners of yesteryear. The sense of nostalgia was palpable, you could taste it in the air.

But we weren’t there to reminisce about the past. We were there to begin the process of building America’s first cannabis café.

None of us knew what to expect, but we knew that we could count on each other. Each of us brought something different to the metaphorical table. The café manager, the design team, the architect, the lobbyist, the cannabis chef (me) … all of us with years of experience, all of us with a shared dream. We knew we were on the verge of making history, and with that came a flood of emotions — joy, excitement, and maybe just a pinch of angst.

I should probably mention here that I’ve never opened a restaurant before. In my naiveté (or fearlessness, if you’re feeling charitable) I wanted to get to work the moment I stepped in the door. There were menus to plan, produce to source, supplies to order, staff to hire. In my mind, there wasn’t a moment to lose. My more experienced partners, on the other hand, knew we were in for a long journey. They told me to relax, breathe, let myself settle.

Later, I would learn that the list I’d made in my head didn’t even scratch the surface of all there was to do. It turns out that starting a cannabis café is much harder than you’d think.

The Challenges of Opening a Cannabis Café

Even in a cannabis-friendly state like California — which has a long history of cannabis-related firsts —opening a business as unusual as this one comes with a lot of moving parts.

First, there’s the city licensing to consider. As you might expect, our proposal for the café raised more than a few eyebrows. But we were lucky: the administrators of West Hollywood have been some of our biggest champions from the very beginning, and they’ve backed up their encouraging words with concrete actions. I owe them so much, I’ve thought about naming my firstborn child after the city (Baby WeHo doesn’t sound so bad, actually).

Then there’s the matter of state legislation. Just like opening a cannabis dispensary, starting a cannabis café requires a mountain of paperwork — and there are a lot of rules to follow. Dotting all the i’s and crossing all the t’s can often feel like a full-time job itself.

And that’s before you factor in communicating (or over-communicating) with the health department and the construction crew, coordinating everyone’s schedules (which rarely align the way you’d like), and trying (often in vain) to hit deadlines that always seem to arrive just a bit too fast.

How Exactly Does One Launch a Cannabis Café?

Every day brings us closer to the grand opening — we’re finally getting to the good part. The challenges continue, though. Samples of plates arrive (none of them are approved). Samples of napkins show up, too (their texture is all wrong). We have endless meetings about succulents and silverware and place mats and olive trees.

I only begin to relax weeks later, when the kitchen doors open for testing. I don’t know how many hours I’ve spent thinking about the recipes I want to try, I can’t remember how many dreams I’ve had about the dishes I want to serve — but now I’m ready to try them all. I draw deep from culinary history and my own food memories. As I cook, I think about my humble beginnings, the pop-up dinners and the experimental menus, the praise (and criticism) I’ve heard from patrons over the years. I quiet the voices the same way I always have: With the gentle swoosh of my marble-handled chef’s knife against a matching steele. I breathe in through the nostrils and out through the mouth, feeling the breath in my belly. My anxiety subsides, a little at least.

As a chef, you come to know that a culinary point of view is one of your greatest assets. It’s what sets you apart from other artists — and it sets an expectation for the diner. My own culinary point of view is as eclectic as my past. I close my eyes and see pork belly glazed with Georgian maple syrup, served with hand-selected pinto beans. I see sous-vide bone-in pork chops, grilled to perfection with peach and heirloom tomato caponata. I see a Singaporean chili crab pot, cooked in the style of the Deep South with sweet corn, spicy sausage, and red potatoes. I see pecan tarts, ice creams and other confections that remind me of my life in the world of food.

But I know I need something different this time. I need to dig deeper — to push my creativity to its absolute limit — to create a menu worthy of the country’s first cannabis café.

So we cook through the ideas, adding this, subtracting that, and multiplying still other things. In the end, we’re left with a selection of dishes I can be proud of — dishes that feel like they belong in a place as unique as this one will be. We’ve created an entirely new culinary point of view, one that is defined not by the experience of a single person or even an entire region, but one that takes all our dreams and ideas and fuses them into a remarkably fresh and invigorating concept. I know in my gut that cannabis cuisine will never be the same.

Back in the real world, there’s still work to do. We meet with vendors, order equipment (and send much of it back), inspect the produce … all while stepping over people, pipes, and tools as we dash off for a quick restroom run. There are still uniforms to order and staff to train. The work is hard, but it’s satisfying, because we’re not doing this to gratify our own egos. We’re doing it for the people — because this is what the people want.