Understanding the Connection Between CBD and Ayurvedic Tea 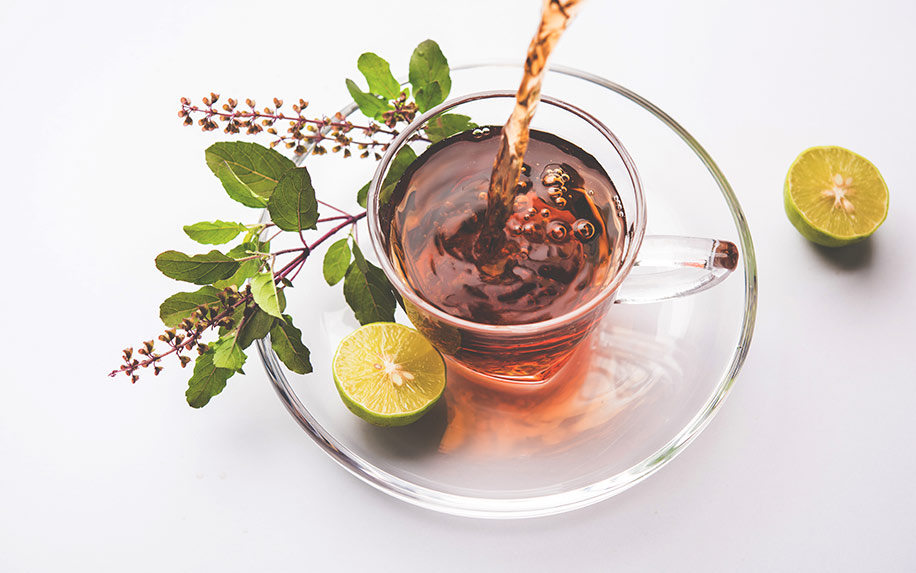 CBD can help our bodies and ayurvedic tea can also give us an energy boost. Image Credit: By Indian Food Images on shutterstock

Energy-boosting Ayurvedic teas are a healthy alternative to coffee, offering all the alertness with none of the caffeine jitters. But could adding a dash of CBD oil — the current star of the health and wellness world —make it even better? Experts are not so sure.

For those who don’t know, Ayurvedic teas are herbal teas — often made with spices and herbs like ginger, cinnamon, licorice, and cardamom —  which are caffeine-free and created according to Ayurvedic tradition. They are reputed to not only enhance our physical well-being, but to support our mental and spiritual health as well. In particular, the balancing of the doshas (known as vata pitta, and kapha, the three elemental forces that comprise a person’s character) plays a significant role in this tradition and the tea recipes which are a part of it.

The History of Ayurveda (and CBD)

Ayurveda is one of the oldest forms of traditional medicine, with roots stretching back to the second century B.C. First popularized on the Indian subcontinent, its practitioners soon amassed a wealth of knowledge about nature-based medicine. They used this knowledge to craft herbal remedies, often in the form of teas, to treat common health issues such as high blood pressure. The rise in popularity of yoga and meditation throughout the Western world over the past few decades helped introduce many Americans to the Ayurvedic tradition, and today it’s common to see Ayurvedic remedies and practices offered at luxury health spas and wellness centers.

Lately, CBD has also garnered quite a bit of buzz in health and wellness spaces. Like Ayurvedic remedies, CBD is touted as having a host of benefits for both mental and physical health — one study showed a single dose of CBD could reduce psychosis symptoms, while other studies have shown it to be an effective natural arthritis treatment. Although many of the more sensationalist claims made about CBD and its effects as a so-called “miracle medicine” aren’t based on any scientific evidence whatsoever, there does appear to be a significant amount of proof that CBD oil has tangible benefits for a wide range of conditions.

What Does CBD Have to Offer?

One of the most promising applications of CBD appears to be as an anti-inflammatory. Studies have shown that it can significantly reduce inflammation and the myriad health problems that it causes, making it an effective treatment for a wide range of conditions including arthritis, diabetes, dementia, depression, and pain.

We all experience inflammation in some form or another on a regular basis, so the potential of CBD to combat this makes it a formidable tool in your natural medicine arsenal. Another point in its favor: unlike conventional anti-inflammatory medications that can cause a number of unpleasant reactions, CBD has not been found to cause any significant side effects, according to a World Health Organization report.

CBD’s anti-inflammatory properties aren’t the only reason you might be tempted to mix it with your Ayurvedic tea for something extra-healthy to sip on.  Increasingly, studies are pointing to CBD as a powerful acne-fighting skin care ingredient with a number of useful anti-aging benefits. It is now becoming a mainstream ingredient in beauty and skin care products as a result. The potential of CBD oil to reduce the frequency and severity of seizures in many forms of epilepsy is also under intensive examination right now, and the first ever CBD-based medication for epilepsy was recently approved by the Food and Drug Administration.

There’s certainly reason to believe that CBD could give a big boost to your health and wellness. But is adding it to a tea really the best way to do it?

Does the Trend Merit the Hype?

Apparently, some people believe so. CBD-infused teas (and CBD coffee) have become increasingly popular across the country, with cafes and restaurants finding new and inventive ways of getting CBD onto their menus . And although there has been a recent crackdown on CBD edibles by state health departments, it seems unlikely that the trend will lose momentum any time soon.

Still, in the case of Ayurvedic teas, there might not be much point in adding a few drops of CBD oil to the mix. This is because these teas usually contain natural ingredients which have been proven to contain many of the same properties as CBD oil. For example, Ayurvedic black tea or green tea recipes will already be very high in wrinkle-busting antioxidants, so adding CBD in the hopes of improving your skin is unnecessary.

If you’re curious about seeing what CBD is all about, there are other ways of getting it into your daily diet which could be much more beneficial for you. On the flipside, there’s nothing to suggest that adding CBD to your Ayurvedic tea could harm you in any way.