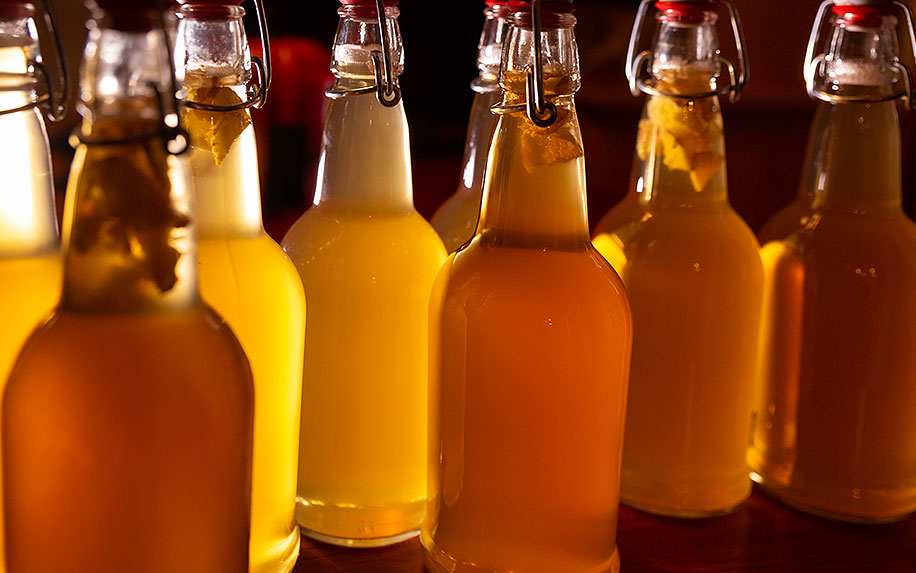 In 2009, a fermented tea called kombucha was named “the most liberal product in America” by Slate. Even then, it was a staple of the natural wellness community — and a decade later, it’s become a ubiquitous sight at yoga studios, farmers markets, and organic restaurants around the country. Today, many contemporary concoctions feature a new twist on this old favorite: they’re infused with cannabidiol (CBD).

Unlike some questionable ingredient combinations we’ve seen over the years in the wellness industry, infusing kombucha with CBD makes sense. Both ingredients look after different parts of the body, so there isn’t any unnecessary overlap. While kombucha is primarily known for boosting gut health, liver function, and strengthening the immune system, CBD targets the body’s endocannabinoid system to relieve anxiety, ease pain, and improve the skin.

Together, they make an unusually healthful pairing. CBD-infused kombucha is rich in probiotic bacteria and yeast that help to restore balance to the body’s natural bacteria levels, which play a central role in overall health. This is particularly relevant to gut health, which researchers believe plays a much bigger role in wellness than the medical community has given it credit for in the past.

“Obesity, cancer, anxiety, and depression all may be influenced by the type of bacteria living in the gut,” said Kirsten Tillisch, M.D., chief of integrative medicine at the Ronald Reagan UCLA Medical Center.

It might be helpful in the treatment of cancer, too, with a huge emphasis on “might be.” A study in 2008 examined the effect of drinking kombucha on cancer cells, and it found that its antiproliferative and antimicrobial properties prevented the growth of cancer cells. Another study in 2013 linked kombucha with the death of prostate cancer cells. Researchers have also discovered that CBD and other cannabis compounds could have cancer-fighting properties.

Other claims of its health benefits require less of a stretch. Both CBD and kombucha are powerful antibacterial agents, which means that drinking a tea containing both will naturally support the immune system to kill bacteria and fight off infections. This can be extremely helpful for managing common conditions like acne and urinary tract infections, and even more serious illnesses like gastroenteritis and fungal hair loss.

The list of potential health benefits of CBD-infused kombucha is seemingly endless, especially considering the fact that scientists are only now starting to understand the ways that CBD supports the endocannabinoid system and promotes health.

In the past, we’ve associated healthy foods and drinks with nasty concoctions that we have to swallow back in the name of health, but fortunately those days are behind us now. CBD-infused kombucha comes in a range of flavors so diverse and inventive that they’re likely to satisfy even the most discerning of palates.

“I’ve been able to branch out with more flavors, and any regular flavor can be made with the supplement of CBD oil,” as Jessica Peterburs told Shepherd Express. Her CBD-infused kombucha brand, LoveBootch Kombucha, has proven to be remarkably popular in her home state of Wisconsin (the Midwest is more cannabis-friendly than one might imagine). Like many of her fellow CBD entrepreneurs, she’s concocted a number of exotic blends to make the drinks more appealing to a general audience. According to Peterburs, the brand’s most popular flavor combination is elderberry, blueberry, and spearmint.

Some brands have taken their taste experiments one step further, like GT’s Cannabliss CBD-infused kombucha. Flavored with, turmeric, pineapple, ginger, black pepper, and lime, this is a drink that will make your taste buds tingle. Each 16-ounce bottle contains 10 milligrams of full spectrum, hemp-derived CBD. As one reviewer commented, “At first sip it’s sour, which fades into ginger & lime sweetened by the pineapple. OMG it leaves you wanting more,” it’s definitely one worth trying for wellness enthusiasts.