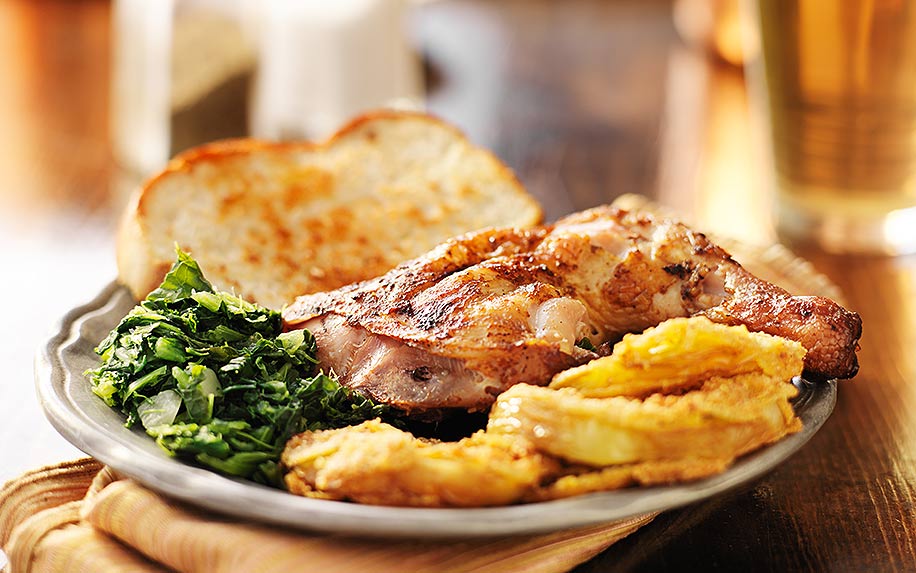 The CBD industry might be growing at a breakneck pace, but that growth has been uneven — especially in communities of color. Due to the steep price of CBD products and the high barriers to entry for prospective entrepreneurs, there’s a burgeoning CBD wealth gap that’s preventing many people, especially black Americans, from accessing the benefits of this popular cannabinoid.

With his innovative CBD-infused soul food products, Rickey “Hollywood” Hendon of Hollywood Park, Chicago is doing his part to change that.

Soul food “is a term used for an ethnic cuisine, food traditionally prepared and eaten by African Americans of the [southern] United States,” according to the African American Registry. Staples include foods like fried chicken, collard greens, grits, and catfish — and a craze is growing for the food all over the country. According to Thrillist, much of the credit goes to chefs who are “finding inventive ways to represent and reimagine the recipes so many Americans know and love.”

Hendon, a former state senator who now owns a CBD shop on the West Side of Chicago, probably wouldn’t consider himself a chef (though he did serve up a homemade banquet of CBD soul food classics to celebrate the grand opening of his store). Still, his line of CBD-infused seasonings, along with familiar favorites like sweet potato pie, is certainly an inventive reimagination of this uniquely American cuisine.

But Hendon’s aim isn’t solely to satiate the hunger of his customers, but also to strengthen his community. As he told Block Club Chicago, he wants to use his store as a platform for other entrepreneurs of color in the city. “We’re giving shelf space to different vendors who otherwise wouldn’t have it,” said Hendon. “I don’t see them as competitors because there’s enough for all of us.”

In a CBD world that is quickly becoming homogenized as deep-pocketed corporate behemoths squeeze out mom-and-pop operations, Hendon’s model — and the products he sells, such as the Biggz Hot Hemp spice mix — stand out from the crowd.

“We have our tinctures, we have our massage oils, so we do have some things that are traditional. But at the same time, we’re soul. We’re black. We do seasonings,” he said.

There’s little available data on the number of black people who use CBD. However, one of the few surveys to investigate racial breakdowns of CBD users — a 2019 report from research firm High Yield Insights — found that the “Entrepreneur Ed” demographic, a segment of mostly young, single men that comprises an estimated 12 percent of CBD users — was “[all] African American.”

This is somewhat ironic, because black entrepreneurs have faced an uphill battle to enter the CBD industry almost from its inception. When the 2018 Farm Bill, which legalized the production and sale of hemp and hemp-derived products like CBD, was passed, it included a provision that forbade anyone with a felony drug conviction from participating in the new industry for at least ten years. Considering the fact that black people are “3.73 times more likely to be arrested for [cannabis] possession than a white person,” despite using cannabis at the same rate, and “five times as likely to be arrested for felony [cannabis] possession,” according to an American Civil Liberties Union report, this provision added a huge legal hurdle to the financial ones already faced by many people of color looking to get into the CBD business.

While the murky nature of the CBD industry means that it’s difficult to get a clear read on how many businesses are founded or run by African Americans, looking at the cannabis industry in general provides an idea of just how severe the problem has grown. According to data from Marijuana Business Daily, only 19 percent of all cannabis businesses in the United States are owned by people of color, and only 4.3 percent of those owners are African American.

According to Hendon, the key to carving out a foothold for people of color in the CBD industry — and reaping the benefits that could ensue — is cooperation and mutual support between community members. That’s one of the reasons he’s so focused on providing a venue for CBD entrepreneurs of color to sell their products.

As he told Block Club Chicago, “The West Side [of Chicago] could be just as beautiful and economically feasible as the North Side. But it’s up to West Siders to do that. We can’t depend on another community to do what we need to do for ourselves.”

The “social equity” programs put in place by many states with legal cannabis, which aim to broaden the cannabis-related economic opportunities available to communities devastated by the decades-long War on Drugs, could also provide inspiration for opening up the CBD industry in particular. However, such a move would need to wait until either state or federal authorities unveil CBD-specific regulation, since currently there’s no government oversight of CBD businesses (and as a result, no agency to expedite permits, give grants, or provide other types of support).

In the meantime, it’s up to hardy souls like Hendon to blaze a more equitable path forward — and fortunately, he seems ready for the challenge.