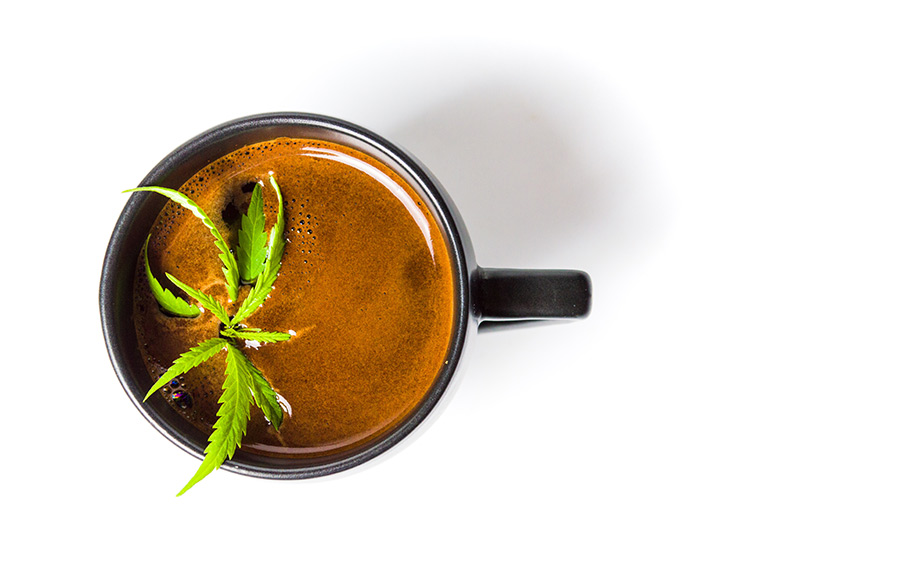 Coffee and cannabis are two of the most well-loved vices in American culture. People in the U.S. drink 450 million cups of coffee per year, according to HowStuffWorks, with around half of adults drinking it every day. Cannabis has also become an increasingly ubiquitous part of people’s routines, with a recent survey from the Substance Abuse and Mental Health Services Administration (SAMHSA) showing that Americans’ cannabis use has skyrocketed since 2002 — by 33 percent in non-legalized states, and 47 percent in states where the plant is legal.

It’s little surprise, then, that companies have begun to capitalize on the popularity of these two popular substances by mixing them together. CBD coffees are now a common sight in cafes around the country, while THC-infused varieties can be found from specialty manufacturers like Cannabiniers, whose Brewbudz K-cups are billed as offering “rapid onset with sustained delivery, absent of any evident signs of cannabis use.” The demand for cannabis-infused coffee is so great that even Starbucks is considering a line of infused beverages.

This trend might be great for brands’ bottom lines, but what about its effects on consumers’ health?

As coffee lovers know all too well, the research into the beverage’s health effects often paints contradictory pictures (sometimes in the same article). For example, a 2006 review in the journal Critical Reviews in Food Science and Nutrition found that coffee’s high levels of caffeine and chlorogenic acid, both of which boost can boost energy and mood, may help with treating certain chronic illnesses like type 2 diabetes, Parkinson’s, and liver disease. However, it also found that people who drink more than 3-4 cups per day were at greater risk of cardiovascular disease.

Research into cannabis’ impact on health has been more limited, though this could be changing soon with the lifting of decades-old restrictions on new studies. Once again, though, there’s a mixed picture when it comes to safety. On one hand, most of cannabis’ side effects are thought to be relatively mild — bloodshot eyes, reduced coordination, drowsiness, and the like. It’s also been found to be helpful with issues like pain, inflammation, and anxiety. However, other studies have shown cannabis could pose greater risks for vulnerable populations, like a 2004 paper in the British Journal of Psychiatry that found it could increase the chances of psychosis among people predisposed to the condition.

When it comes to mixing cannabis and coffee together, scientists currently have more questions than answers. Part of this is because cannabis can be both a stimulant or a depressant, which makes its interactions with a stimulant like coffee somewhat tricky to predict in individual users. But given the great interest in the topic, there’s a strong incentive for researchers to dig deep in their search for insight.

How Do Cannabis and Coffee Work Together?

Only a few studies have specifically examined the effects of mixing cannabis and coffee, but the results they’ve yielded have been thought-provoking.

For example, in a 2014 study published in the Journal of Neuroscience, monkeys were given THC and a compound that mimics the effects of caffeine, called MSX-3. Low doses of this substance resulted in the monkeys self-administering lower amounts of THC, while higher doses produced the opposite effect — the monkeys actually consumed more THC. While there are obvious limitations to this study (the biggest being that it wasn’t conducted on humans), it does suggest that small amounts of caffeine could make cannabis users feel more intense highs, reducing their need to use more.

The combination of coffee and cannabis also has interesting effects on memory. Caffeine is known to help memory, while cannabis hinders it, so you might think they’d cancel out each other’s effects — but that doesn’t appear to be the case. In a 2012 study published in the British Journal of Pharmacology, researchers investigating the effects of caffeine and THC on working memory in rats found that, “Caffeine did not counteract memory deficits induced by THC but actually exacerbated them.” Again, the lack of human test subjects limits the conclusions we can draw from these findings, but it’s enough to make you think twice about pouring another cup of coffee to balance out the effects of those THC gummies you just ate.

But since most of the cannabis-infused coffees available today are CBD-heavy, with only trace amounts of THC (or none at all), what do we know about the effects of caffeine and this non-intoxicating cannabinoid?

Not much, unfortunately. As Dr. Bonni Goldstein, the medical director of wellness and education enterprise Canna-Centers, told Marie Claire, “It’s unclear at this point in time the exact interaction between CBD and caffeine. At low doses, CBD is a stimulant and in higher doses it can cause sedation … Someone’s reaction to a combination of these compounds would not be easily predictable because various doses of each would affect the response.”

That said, if you do choose to combine the two, experts like to remind consumers that everyone’s bodies process cannabis and caffeine differently based on factors like their age and metabolism. So, “start low and go slow,” and pay attention to how your body reacts to small increases in dosage. If you feel intensely uncomfortable after mixing the two (whether in the form of an infused coffee or otherwise) contact a health care provider immediately.