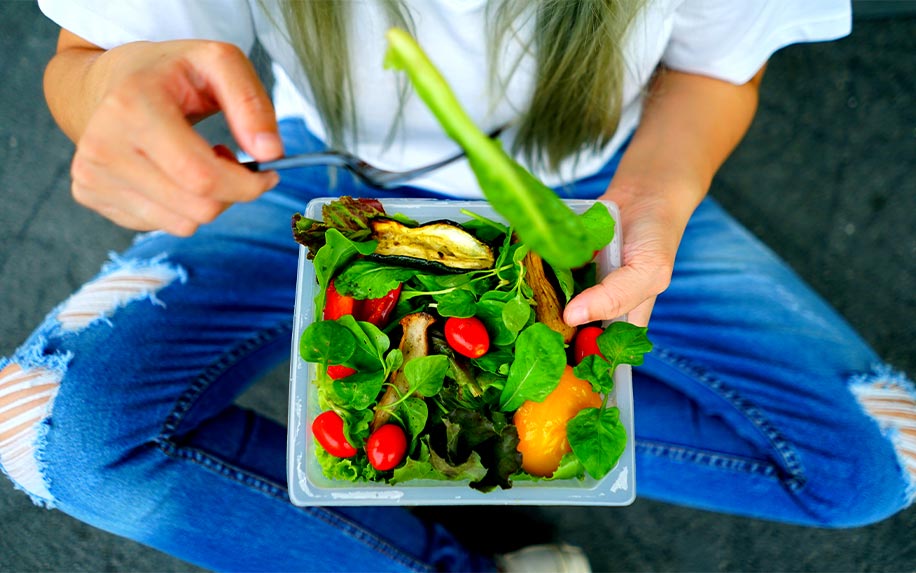 Cannabis is one of the most versatile plants on the planet. We can eat its seeds (which are high in omega-3 fatty acids, protein, and essential minerals), make use of its oils (which are great for cooking and in skin care), and take advantage of its cannabinoids and terpenes, which have displayed powerful therapeutic properties. When it comes to the hemp version of the plant — which is more industrial and has lower concentrations of cannabinoids — we can use it to make a huge variety of products, including soap, clothing, paper, and even sunglasses (yes, really).

What we don’t hear much about, however, are the leaves. What role do they play, if any? As a dark leafy green, could they have untapped health benefits of their own? Here’s what you need to know.

At the moment, cannabis leaves aren’t much more than a byproduct, even a nuisance, for cannabis farmers and CBD product manufacturers. As John Berdux, cofounder of the hemp honey and CBD supplements company Apis Mercantile explains, “Currently, leaves are processed as biomass,” which means they’re essentially viewed as waste material that no one is sure what to do with.

“For someone growing for flower or oil production, the leaves are of little value; in fact, they dilute the potency of the biomass intended for extraction,” says Matt Rowe, a grower on an organic hemp farm in Colorado. This is because cannabis leaves don’t have many trichomes, the tiny, colorful “hairs” that give cannabis flowers their distinctive appearance (and also produce the resin rich in THC, CBD, and other compounds that give cannabis many of its medical and/or recreational qualities).

Rowe pulls off as many leaves in the field as he can, then he mulches them and feeds them back into the soil. But “for the most part, they are going to end up in the extractor’s hands, get processed (with minimal oil production), and then end up as a waste product,” he says.

No, Raw Cannabis Leaves Will Not Get You High

If you’ve ever tried chewing a handful of fresh cannabis (we won’t ask why) you might already suspect the answer is “no,” and you’d be correct. Why is that, though? It’s simple — THC is what makes you high, and there’s no THC in raw cannabis. The plant has to be heated to turn its non-intoxicating THCA into intoxicating THC, a process known as decarboxylation. And since THCA is scarce in cannabis leaves to start with, up until now they’ve struck most people as a superfluous part of the plant.

But if there were a way to make use of the leaves, it would be a beneficial (and lucrative) move from both a sustainability and business perspective. The question is: Can you?

Could Raw Cannabis Leaves Be the New Kale?

Although it’s mostly limited to obscure blogs or community message boards online, there is some chatter about using cannabis leaves for their therapeutic properties. Some people claim that the green leaves contain high levels of beneficial chlorophyll, while others suggest they have a substantial concentration of cannabinoids CBDA and CBG. A doctor named William Courtney is leading a small “raw greens” movement and argues that there should be a worldwide adoption of daily raw cannabis consumption.

Berdux wouldn’t be surprised to see the leaves sold as a stand-alone product in the near future, as people continue to monetize the plant. “But how it will be marketed and what the value-add would be, I’m not sure,” he says.

One Problem: Nobody’s Quite Sure How Nutritious Raw Cannabis Leaves Actually Are

Berdux makes an important point here, since despite the many claims you’ll find online, the exact nutrition profile of the leaves is still almost entirely a mystery. As Jess Pirnak, R.D., a registered dietician and founder of Food Yourself, explains: “Unfortunately, there’s not a lot of research out there on the health benefits of raw cannabis leaves.” Therefore, any benefits touted online would be based on only anecdotal evidence, or no evidence at all.

Despite the lack of research, Pirnak suspects that a dark leafy green (like cannabis) is a dark leafy green, with all the health-boosting qualities that come with the territory. “We already know how amazing dark leafy greens are for us from an anti-inflammatory and antioxidant perspective, so I wouldn’t be surprised to learn that raw cannabis leaves have the same health benefits as the other dark leafy greens we currently eat,” she says.

And then there’s a final issue: Taste. As Rowe points out: “Cannabis leaves are bitter and not so tasty.” But hey, with the right dressing (perhaps a CBD-infused one?) and a sprinkling of dried cranberries, goat cheese, and walnuts, it’s not that hard to imagine raw cannabis leaves being a staple in the salad bars of the future.