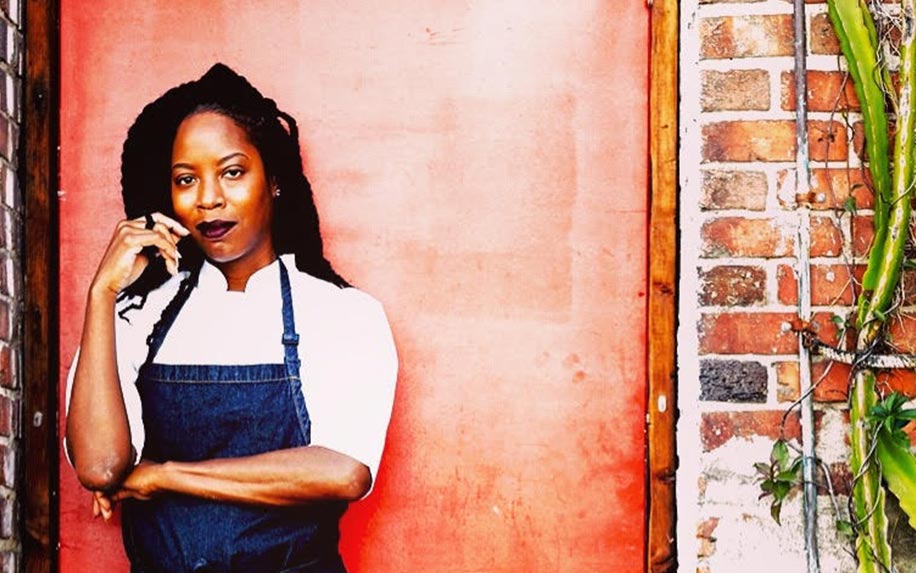 Andrea Drummer joins the cannabisMD team as our food expert in all things delicious for our taste buds and healthy for our bodies. Image Credit: Andrea Drummer

I grew up in Ft. Lauderdale, Florida, in a family where home remedies were as much of a mainstay as attending church Monday through Sunday. In my first profession, I worked at a non profit where I not only subscribed to the belief — but also taught — that cannabis was a gateway drug. However, after a great deal of personal evolution and education, this church-going girl from the American South eventually became one of the country’s first cannabis chefs.

My crash course came fast and hard in 2012, after I began experiencing extreme lower back pain. As a chef, this is one of the most debilitating ailments you can have — and mine would not go away. I was faced with what I believed to be two options: Live with it or live on prescription pills. Ultimately, at the suggestion of a friend, I found a way of living a (practically) pain-free existence. It was option 3: Cannabis.

This was a full circle moment. I, the chef, was still learning how to allow nature to nurture me.

I’d always loved food, and always had a certain fixation on its health benefits. Some of my favorite food memories involved in-depth lessons on the medicinal properties of whatever food thing was in front of me — from the aloe plants that grew plentifully in the garden box outside the bay window of my childhood home, to the oranges that sprouted from our backyard orange tree. Even then, as I would squeeze oranges into an antiquated device that caught juice in a collar outfitted with the smallest pour spout, I knew that the vitamin C held in that juice was precious and my parents would excitedly explain why I should value that fresh orange juice the same as I would hard-earned cash. Still today, I save and savor vats of “pot liquor” (a liquid left behind after boiling greens or beans) to incorporate into other dishes for added vitamin A and vitamin K. My family believed that a clarified cup of this southern staple and a slice of homemade cornbread would soothe inflammation or assist with digestion. My parents were in on the idea of food as medicine too and “Health is Wealth” was a kind of family anthem.

There is a great power in understanding that food is there to support your health needs and healing, all while being delicious (how uncanny that we might consider, say, dark chocolate, a guilty pleasure when it offers antioxidants and is proven to protect us from sun damage?). All day and twice on Sunday, I could celebrate this idea of nature nurturing us. But never, and I mean NEVER, might I have imagined that this very notion would connect me, my ideology of food, and my career to the controversial cannabis plant.

You see, my humble beginnings started in the in between of Florida and Georgia, along a bible-belted interstate with great religious influence and cultural implications when it came to the “weed.” And while collard, turnip, and mustard greens were plentiful and used abundantly, the other green, cannabis, was demonized. Cannabis, where I grew up, was judged the same as any narcotic — the general thought was it would lead to a path of heavy addiction and spiritual damnation. I subscribed to this thought as well, this rhetoric became my gospel. Yet unbeknownst to me, my thoughts about cannabis would soon be forever changed.

Just as I’d approached my first lessons about food giving nourishment —with an open (child’s) mind — I began to deeply explore the medicinal properties of cannabis. And, in the past few years, I’ve come to understand the complexity of the plant and its offerings; how its derivative, CBD, aids with epileptic seizures, multiple sclerosis, Parkinson’s, and supports patients living with cancer. I’ve discovered how cannabis has helped veterans find relief from PTSD and anxiety. Even pets are benefitting from the anti-anxiety inducing properties of CBD. For as much as a head of cabbage comes packed with nutrients and health benefits, so too does an organically grown and CBD rich strain of cannabis. As legalization continues to expand and clinical trials are underway, we’re unearthing the grandeur of cannabis more and more every day.

I am first and foremost a chef who appreciates thoughtful food with intention of nourishing both the body and the soul. Today I enjoy cooking hundreds of recipes with cannabis — from warming soups to simple, flavorful entrees to perfectly balanced desserts. I even wrote a cookbook about it. And, as I embark on a new journey, opening a cannabis restaurant in West Hollywood, I’d like to take you along with me. Each month here at cannabisMD, I will be making suggestions, answering questions, demystifying stigma, and spilling my favorite cooking techniques and secrets.

Won’t you join me on this journey of food and healing?