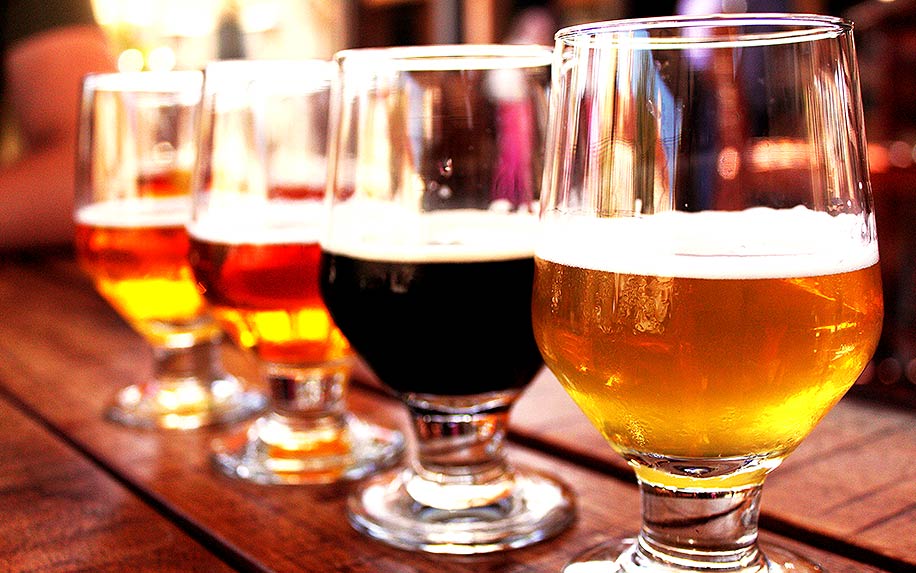 The idea of “cannabis beer” has long held a certain appeal for college students and other recreational substance enthusiasts — and marketers around the world have taken note. Combining the inebriation of alcohol and the dissociation of cannabis is not exactly a new phenomenon, but to have both worlds neatly packaged on a shelf like 2-in-1 shampoo is beyond extraordinary.

In fact, it’s beyond extraordinary because it doesn’t exist.

What Is ‘Cannabis Beer,’ You Ask?

When most people think of cannabis beer, they imagine a beverage that contains both alcohol and THC. Even if the ratio is unequal, there’s an assumption that any cannabis beer would combine both elements (and their familiar effects). However, as is so often the case, reality does not match popular perception.

My research for such an elusive concoction led me to several beer companies across the country. Most offered beers that were themed with cannabis-friendly aesthetics like The Hemperor HPA by New Belgium, which featured a human being adorned with cannabis leaves like some elder druid of a headshop. Like many other “cannabis beers,” though, it’s made with hemp seeds — which are devoid of THC.

Other beer companies like Fish Bone infuse their brews with terpenes, giving them the distinct smell of cannabis, but without the psychoactive effects. In short, while a lot of cannabis-adjacent beers do contain certain parts or compounds of the plant, they’re not the ones you might think.

While these beers were indeed drinkable, judging them solely on the merits of taste wasn’t the goal of this article. You’re not reading BeerMD, after all, and if you are, you’re definitely not in the correct universe timeline. Do whatever it takes to return — jump through a portal, call Rick and Morty — just get back here because there’s a reason why “true” cannabis beer doesn’t exist, and the reason is as mundanely bureaucratic as you think it is.

Take California, for example. As the first state to legalize medical cannabis, it has some of the most liberal cannabis laws in the country — but mixing alcohol and THC in the same bottle is still verboten. Heck, you can’t even drink and smoke cannabis in the same facility without authorities raining down on your parade. Blame the inconvenience on provisions in California’s Alcoholic Beverages Control (ABC), which effectively state that you can’t combine alcohol and cannabis.

If you’re looking for a why, you won’t find one — perhaps the idea of people getting “crossfaded” is one that even this famously permissive state can’t stomach.

As a result, a more realistic definition of cannabis beer might be “a carbonated beverage that tastes like beer, but has been completely stripped of its alcohol content in favor of THC.” As you might expect, that’s not the easiest thing to find.

The only company that met these conditions was Lagunitas with their Hi-Fi Hops Collection. The collection consists of three beers, each with a different ratio of THC to CBD. Their strongest is a 10 mg THC version with just under 2 mg of CBD. If you’re looking for something that isn’t on the heavier side, the 5 mg THC/5 mg CBD (5:5) beer is an even blend of THC to CBD. The third beer in the collection sports 18 mg CBD with less than 2 mg of THC, making it the “lightest” of them all.

I had the audacity to taste them all and not share any with you. Sorry about that — but I will tell you about them like the cannabis beer sommelier I am not.

The first cannabis beer I cracked open was Lagunitas’ purple-labeled Hi-Fi Hops, the strongest at 10 mg THC. When the cap was popped, the smell of carbonated cannabis infused the air. I immediately recognized the familiar scent of consumable THC — impossible to mask yet so often attempted. The bubbles of the beer made the cannabis aroma even more pronounced. Taking a deeper whiff from the bottle, it smelled like college.

After tasting it, the beer reminded me of a Hefeweizen if all of its body parts were replaced by marijuana. Every sip makes you more aware that what you’re drinking won’t take effect until much later in the experience. When you drink a normal beer, the effects are pretty straightforward and felt almost immediately. With a cannabis beer, that initial euphoria isn’t there, and you’re constantly bracing yourself for the beverage to “kick in,” which can take quite a while.

Next up was the mid-tier, silver-labeled Hi-Fi Hop bottle which featured a 5:5 THC to CBD ratio. The taste was burpy, almost like you’re inhaling a gaseous sensation instead of actually drinking it. If the first beer was full bodied, this was its Bud Light equivalent. Not great, not terrible — I’d say it was a perfectly cromulent beverage.

The final beer was the 18 mg CBD variety, adorned in a white label. With less than 2 mg of THC inside, there wasn’t a distinct cannabis flavor to it. I’d describe it as a cannabis beer without the beer or cannabis, just an empty vessel of carbonation floating in time and space, waiting for a better definition. Needless to say, this one was my least favorite.

In the end, Lagunitas Hi-Fi Hop cannabis beers are a flawed-but-fine replacement if you’re looking to socialize with beer-drinking friends without the need to ingest alcohol. Just don’t try to order it at any bar or entertainment venue that serves alcohol — because then it’s illegal.