Hemp Milk Is Super Healthy, So Why Isn’t It More Popular? 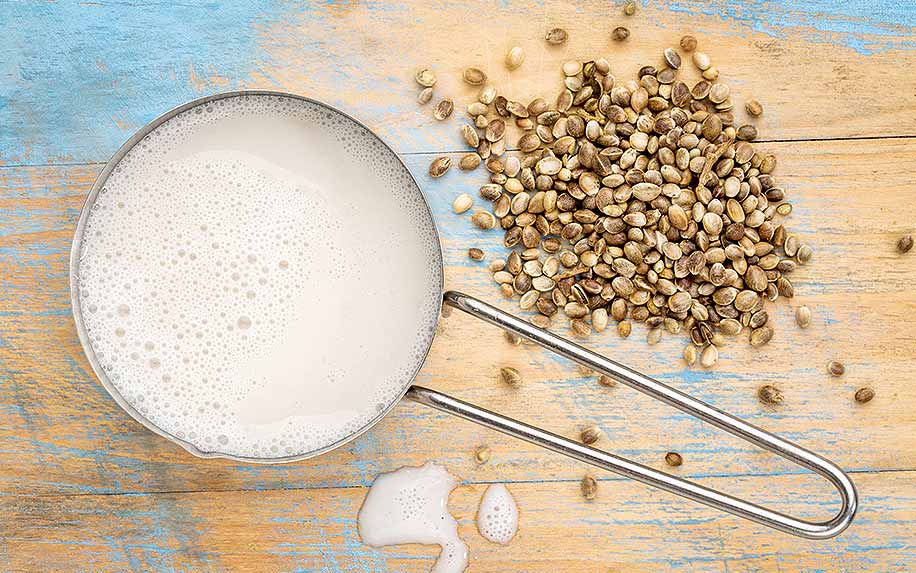 Hemp milk is healthy — why don’t more people drink it? Image Credit: By marekuliasz on shutterstock.

Got milk? It’s been 25 years since the California Milk Processor Board asked this iconic question of the world, and today, the answer is a resounding, “Yes, but what kind?” From almond milk to oat milk to soy milk, it seems that every few years a new alternative to dairy milk sweeps the nation. Yet there’s one beverage that has yet to have its moment in the sun: hemp milk.

Hemp milk is more or less what it sounds like: a creamy beverage made from the seeds of the hemp plant. The process by which it’s made is similar to other milks made from seeds or nuts — first the seeds are crushed into a paste, at which point water is added to the mix. After sitting for a period of time (which varies according to the desired thickness), the concoction is put through a strainer to remove excess plant material — and what’s left is hemp milk.

It’s a remarkably healthy product, rich in fatty acids and minerals like magnesium and beta-carotene (and, of course, calcium). It’s also high in protein, and it’s safe for people with allergies to dairy, nuts, or soy. Another mark in its favor: it doesn’t contain the hard-to-break-down sugars that cause other milks to induce flatulence.

And yet despite the ascendance of hemp thanks to the 2018 Farm Bill, which legalized its production and sale across the United States, hemp milk hasn’t yet caught on with a mainstream audience. You’ll find hemp furniture and decór in hotels, and hemp in your beauty products, and hemp in all types of plastic, but you’re not likely to find it at your neighborhood coffee shop or even your supermarket (unless it’s a high-end establishment like Whole Foods).

Which begs the question: if hemp milk is so good, why isn’t it more popular?

The Downsides of Hemp Milk

Part of the reason may be that Americans are just drinking less milk in general. According to the Dairy Farmers of America, an association that represents nearly a third of the country’s dairy farmers, its sales of milk dropped by over a billion dollars in 2018. And while plant-based milks did pick up some of the slack, hemp milk was eclipsed in spectacular fashion by oat milk — which became so popular that “The Great Oak Milk Shortage of 2018,” as detailed in Eater, led to cases of the product being sold for over $200 on Amazon.

Again, though, the question is: why? It may be because of the lingering doubts many people have about hemp — despite the fact that, by definition, it contains less than 0.3 percent THC (making it physically impossible for it to induce the intoxicating effects associated with marijuana, which is a member of the same plant genus). Since the U.S. federal government was similarly confused about the difference between the two plants for over half a century, this is perhaps understandable.

Yet at the same time, other hemp products have been embraced wholeheartedly by sizable segments of the population, so it’s difficult to lay the blame for hemp milk’s lack of popularity solely at the feet of outdated paranoia. Instead, the answer may be a combination of other factors: it’s expensive, hard to find, and usually made with thickeners.

A quart of hemp milk typically sells for around $10, compared with as little as $2 for other plant-based milks like soy or almond. And while it can be found relatively easily online, the available options are limited — and in most brick-and-mortar stores, there are unlikely to be any options unless you’re looking in a high-end natural foods grocer. Also, since hemp milk is somewhat watery after its initial extraction, thickeners are often added, which can be problematic for people with dietary restrictions (such as those who can’t consume certain types of carbohydrates like soy lecithin, a common thickener).

So, while hemp milk may have a lot in its favor, it also has some significant problems, and they might be enough to ensure it never becomes more than a niche product.