Every Question You Have About CBD Tacos, Answered 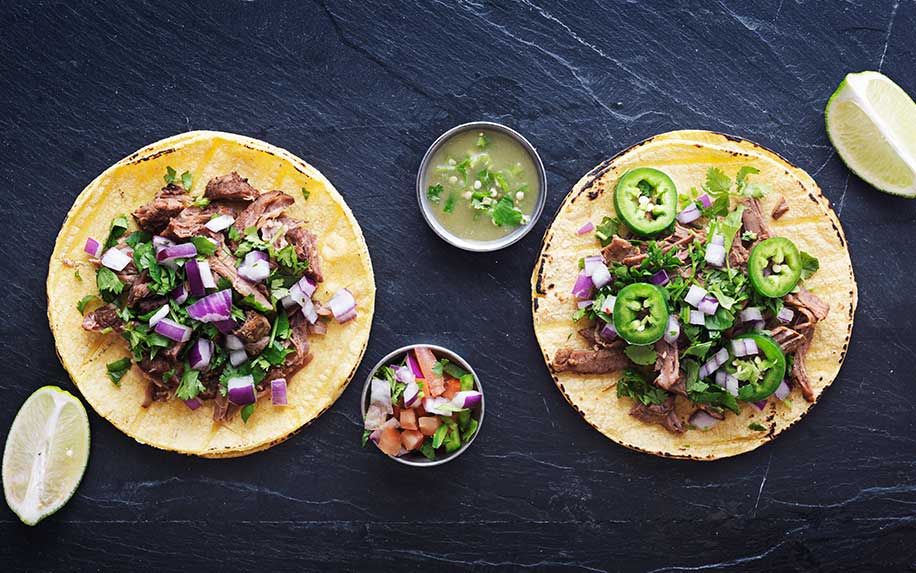 CBD tacos have arrived. But could they work? Image Credit: By Joshua Resnick on shutterstock.

Americans love tacos. We love them so much we eat more than 4.5 billion of them a year, according to NationalTacoDay.com (though this number should be taken with a grain of salt — and a squeeze of lime, and a dash of hot sauce — obviously, considering the source). We’ve also developed a taste for CBD. A recent Gallup poll found that 1 in 7 American adults is currently using the non-intoxicating cannabinoid to relieve issues like pain, anxiety, and insomnia.

Mixing the two together, then, was bound to happen sooner or later, especially considering the rise of CBD food trucks in many cities around the country.

One of the leaders of the CBD taco trend is chef Leo Davila, who operates a food truck called Catch the Wave in San Antonio. His operation offers a variety of tacos — like pork belly, shredded chicken, and barbecued beef — that cost $15 for three, with CBD infusions running an extra $1 per taco. Not surprisingly, CBD tacos have also popped up in trendy Los Angeles eateries and you can find an array of recipes for making them at home online.

Here Are All the Questions You Have About CBD Tacos

What exactly is a CBD taco?

Essentially, it’s exactly what it sounds like: A taco that has had CBD oil added to one or more of its main ingredients. In most cases, this simply involves taking a dropper full of the oil and squeezing it onto the finished product (it’s also possible to infuse it earlier in the preparation process, but since cooking with CBD oil requires using low heat and a number of other specialized techniques, many people prefer to just add it at the end). In the case of Catch the Wave, the extra CBD-infused kick comes from their popular blue corn tortillas.

As Davila told the local ABC affiliate, “We wanted to do it a little different. Infuse [CBD] in the tortilla and have a lot of fun. [It’s] still the same great taco with a little bit of added benefit to it. I’ve actually been on CBD products for the last year-and-a-half. It’s changed the way I feel, conduct my daily life, sleep, interactions, joint movement.”

How much CBD is in these tacos?

This will vary from recipe to recipe, but Catch the Wave told cannabisMD that they use 5 mg of CBD to make each tortilla. The food truck’s CBD comes courtesy of another San Antonio business, Rodkeys, in the form of a “water soluble” CBD isolate tincture that’s billed as having a rapid onset compared to typical CBD products.

Most experts believe CBD isolates are less effective than full spectrum CBD oils, since the former have been stripped of the other beneficial compounds found in the cannabis plant, but isolates do offer some upside for people who want to be extra-careful about avoiding even the smallest trace of THC, which gives cannabis its intoxicating qualities.

Will CBD tacos actually do anything? Or are they a total scam?

If they only contain 5 mg of CBD, chances are the only thing you’ll be feeling is the placebo effect. This is a pretty common phenomenon in the CBD edibles world — the makers of Product X point to a study or two that shows CBD relieves anxiety/reduces pain/etc., and then jump to the conclusion that any amount of it will have the same effect.

But according to a 2017 review in Cannabis and Cannabinoids Research, most of those studies use dosages that range from 20 mg up to a whopping 1,5000 mg, so you’d need to eat a lot of tacos to give yourself a shot at feeling anything.

Could tacos be a good way to take CBD?

Well, if the dosage were higher, they might be.

Mexican dishes like tacos are often touted as a natural pairing for CBD for two main reasons: 1) they contain bold, delicious flavors that help mask the taste of CBD, and 2) they tend to be high in fat. A recent study showed that eating fatty foods (like tacos!) before taking CBD helps boost its bioavailability — i.e. the amount of CBD your body can absorb and process — by four times.

This is important because, in general, orally ingested CBD tends to be less bioavailable than other delivery methods like vaping or sublingual tinctures, since the oil must go through the digestive system before reaching the bloodstream. A 2009 study published in the journal Chemical Biodiversity estimated that oral ingestion could reduce CBD’s bioavailability to somewhere between 4-20 percent.

Theoretically, a water-soluble product like the one used by Catch the Wave could increase this number, but no independent studies have verified that this is actually the case.

Will CBD tacos make me high?

It depends. According to the Food and Drug Administration (FDA), the answer is no — but since the agency still hasn’t established federal regulations for CBD, the matter is currently in the hands of individual states. Some, like New York and Massachusetts, have begun cracking down on establishments selling CBD edibles, much to the displeasure of local business owners.

Other states — including Texas — have responded to the FDA’s foot-dragging on regulation by creating their own laws around CBD edibles. In Texas, for example, establishments that wish to sell them need to register with the Department of State Health Services. Assuming all their paperwork is in order, they’re free to operate like any other food business.

Up to this point, Catch the Wave hasn’t had any legal issues with selling their CBD tacos in San Antonio. Similar efforts in states like Iowa, though, could lead to an unwelcome visit from the health inspector (or the police).

It’s a subjective question, but the answer appears to be “yes,” at least in the case of those offered by Catch the Wave. Davila says that the infusion of CBD doesn’t change the tacos’ taste, and consumers seem to agree.

Earlier this summer, one of Catch the Waves’ infused tacos won first place at the Taco Music Festival in San Antonio. And on Instagram, one user said the food truck serves the “best taco ever.”