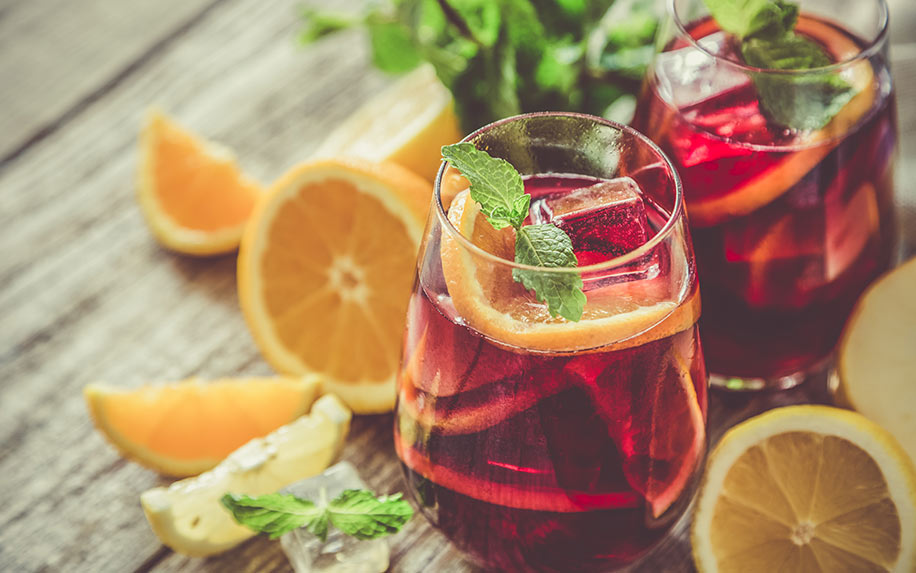 It’s possible that CBD sangria will come to be viewed as an acquired taste. Image Credit: By Oleksandra Naumenko on shutterstock.

For a taste of summer in Spain — infused with the chill vibes of CBD — go see Steve Tattam, co-owner of wine and vinyl store Winyl in Essex, England. With the help of Tattam’s partner Whilmari Swift, Winyl claims to be the first in the country to offer CBD-infused sangria.

Made from young Mediterranean grapes, oranges, limes, and strawberries, the 12-percent alcohol Spanish sangria has a deep cherry color and is recommended to be served as an aperitif over ice.

“The sangria is a premixed sparkling drink — very memorable and different to standard sparkling wines,” Tattam told the Gazette Standard, a local newspaper.

The company behind the premixing is CBD Drinks Co., which introduced Tattam and Swift to their products at the London Wine Fair in May. Purchases of CBD sangria or CBD Drinks Co.’s other canna-wines can be ordered directly through the company website, where the CBD sangria retails for £23. They deliver throughout the United Kingdom (unfortunately American consumers are out of luck, as CBD-infused spirits are still illegal here).

“More and more people are being made aware of the benefits of hemp and CBD products,” Tattam said. “It’s moving away from the previous associations of recreational drug use and getting stoned on marijuana to the more medicinal and relaxing properties of CBD.”

But How Does CBD Sangria Taste?

Winyl and CBD Drinks Co. are not the first to explore the marriage of CBD with a refreshing beverage. In April, a contributor to Forbes called cannabis “the next frontier” in the beverage market. The first Cannabis Drinks Expo is already being planned for summer 2020 in San Francisco, and according to research firm Zenith Global, canna-beverages are expected to be a $1.4 billion market by 2023, up from $89 million in 2018.

There’s just one problem, according to some. How do these canna-beverages taste?

“Like a barnyard,” Ron Silver, owner of Bubby’s restaurant in New York, told the Wall Street Journal. “The oil tastes terrible, and it floats,” he said. “It’s very grassy and very funky.” Other descriptions evoke dish soap and urine, and a gross aftertaste that coats the mouth in a film that lingers.

Some of the biggest bucks in the beverage business are behind the task of making CBD-infused beverages more palatable. Confronting what Bloomberg called America’s “beer slump,” perhaps it’s no surprise that beer companies including Anheuser-Busch, Molson Coors Brewing Co,. and Corona maker Constellation Brands Inc, are at the head of the pack.

Jennifer Stamps, a clinical and sensory neuroscientist, told Bloomberg that making a great tasting cannabis-beverage is all about getting tasters to help identify flavors they want enhanced in the cannabis extracts, like blueberries, while nixing the less-pleasant ones, like dirty socks.

This might explain why Winyl’s CBD sangria was made to be so sweet — fruit sugars may help mask the barnyard vibe — not to mention the suggestion to serve it with ice (which dulls flavor) and the small recommended serving size.

Still, it’s possible that CBD sangria will come to be viewed the same as super-bitter Campari, peaty Scotch, or mezcal so smoky it’s like standing too close to the smoker at a barbecue joint — as an acquired taste.