Are Cannabis Lollipops Right For You? 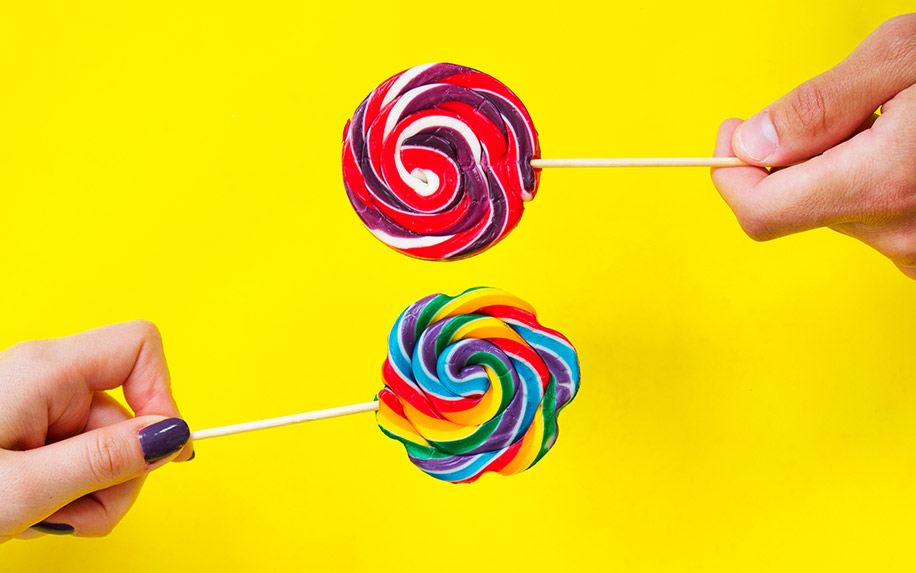 There’s a lot to love about cannabis lollipops — and some precautions to take too. Image Credit: By Hazal Ak on shutterstock.

Cannabis lollipops are exactly what they sound like — a hard candy on a stick, just the same as you remember from childhood. There’s just one important difference: the candy, in this case, was made with cannabis oil.

There are many types of cannabis oil, and this is what determines a particular lollipop’s effects — and where you can buy it. Some are made with hemp oil, and can be found on the counters of gas stations and convenience stores all over the world. They won’t have much of an effect, other than giving you the faint taste of cannabis in your mouth.

Others are made with CBD oil, and can induce the soothing, non-intoxicating effects for which that oil is known (especially if it’s a full spectrum extract). These are widely available in pharmacies and supermarkets across the country — there are only three states where you won’t find them.

Lollipops made with THC-rich cannabis oils, on the other hand, are only found (legally) in licensed dispensaries in states with legalized medical or recreational cannabis. Depending on their strength — generally between 25-125 mg — they can give the user anything from a mild buzz to intense mental and physical sensations.

As with other cannabis edibles, the effects of cannabis lollipops can take several hours to fully kick in. Experts generally recommend waiting at least two hours before consuming more if you’re “not feeling anything.” If it’s your first time, it’s possible that you won’t feel anything at all — there’s no scientific explanation for this, but anecdotally, many people have reported being largely unaffected by their first experiment with cannabis lollipops or other edibles.

What’s the Appeal of Cannabis Lollipops?

It’s undeniable that part of cannabis lollipops’ appeal is their novelty and their array of flavors — manufacturers are now branching out from traditional offerings like cherry and grape to more avant-garde pairings like chili flake-infused lime and pineapple toasted coconut.

But they’re also a lung-friendly alternative to smoking cannabis, with equal appeal for those who simply don’t like the smell. For medical cannabis users, they can offer more discretion when you need to take your medication in public.

Another reason to choose cannabis lollipops is the ability to precisely calculate your dosage. While it can be a challenge to calculate how many bites of a cookie, puffs of a vape pen, or dabs of an ointment are equal to, say, 50 mg, cannabis lollipops offer a much clearer picture of exactly how much CBD or THC you’re putting into your body. (Though not all labels can be trusted — CBD products, in particular, are notoriously unregulated, and some experts estimate that up to 70 percent of them may be mislabeled — it’s your only real option, shorting of bringing every product to a lab for testing before you use it.)

Sometimes, though, knowing your own tolerance is just as important as knowing the ingredients. As with any psychoactive drug experience, use caution. On rare occasions, a stronger than desired dose of cannabis can have serious side effects — especially for people with pre-existing heart conditions. One 70-year-old Canadian man wound up in the hospital after consuming a cannabis lollipop with 90 mg of THC (for comparison, an average joint contains around 7 mg), and while his case was highly unusual and severe, it’s worth keeping in mind. Cannabis lollipops may look like candy, but they should be consumed responsibly and, obviously, kept out of children’s reach.

While choosing your ideal dose will depend on many factors (including your cannabis tolerance, your metabolism, and your age), there are a few rules of thumb that apply to everyone. “Start low and go slow” is a mantra repeated by every cannabis expert: especially for beginners, it’s recommended to start with a small dose of just a few milligrams, and to increase it gradually depending on your reactions. It’s also a good idea to check with your doctor before using cannabis lollipops — or any other form of the plant — to ensure it won’t interfere with your current medications.