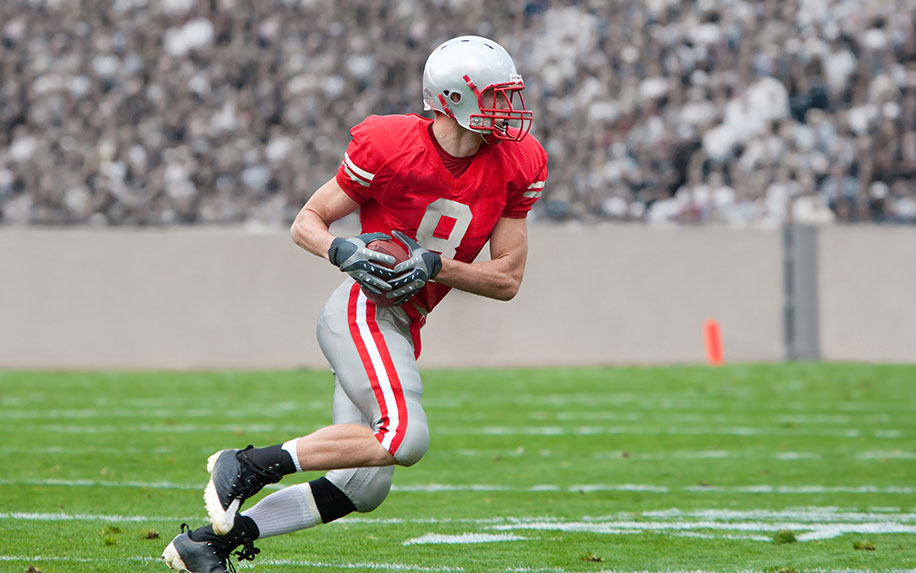 Following a trend present throughout the sports world, CBD is being pushed into the spotlight by ex-NFL players (with one prominent example being former star running back Terrell Davis, who recently released his own line of infused sports drinks). Unlike other sports, however, the stakes are often higher — in some cases, it’s even a matter of life or death.

Before ex-Rams offensive tackle Kyle Turley found CBD, he was subject to unpredictable rages and suicidal urges, his mind ripped asunder by the sport he loved. His health problems dated back to a 2003 regular season game against the Green Bay Packers, when he left the game with a concussion. He remained unconscious for an unspecified period of time. After the game, his wife took him to the hospital, where a scan revealed two dark masses on his brain.

Two days later, he was back at practice, blocking full-speed rushes from a fellow player. “Just to see if I could stay conscious,” Turley told Sports Illustrated. “That was the test back then.” He didn’t miss a game, and finished the season, but his health problems continued to mount.

At the end of the season he was cut from the team, and started working toward an unsuccessful comeback. Doctors thought he had sustained brain damage. His painkiller intake, never light in his playing days when “pain pills were just being handed out, it was almost encouraged,” began to increase.

When he finally found CBD, it was a turning point. In 2015, he founded Neuro XPF, a CBD producer that sold for $10 million in 2018. According to the Sports Illustrated story, Turley “believes CBD can save the world.”

Or at least the NFL. The moment seems to have arrived for the league to figure out a better solution to its pain problem. As reported by CNN, in 2015 a complaint was filed on behalf of 1,800 former NFL players against all 32 teams, alleging that team doctors and trainers freely supply painkillers to players in an attempt to keep them playing, and that teams “maintain the return to play or practice policy by ensuring that players are not told of the health risks associated with taking medications.”

Included in the complaint is the testimony of the widow of former Raven Charles Evans, detailing how Evans would receive unlabeled envelopes full of Motrin and Percocet from the team’s trainers. Post-retirement, he continued to receive these drugs, feeding an addiction that may have led to the enlarged heart that killed him. According to the American Heart Association, regular use of anti-inflammatories can increase the risk of heart attack and stroke from 10 percent to 50 percent.

According to the complaint, in 2012, teams prescribed 5,777 doses of anti-inflammatories and 2,270 doses of narcotic painkillers on average. Broken down over 53 players, players received an average of 150 doses of painkillers each.

Growing awareness of the dangers of these painkillers, both to football players and the general population, has led a number of medical experts to suggest that CBD could be an attractive alternative. As Dr. Shereef Elnahal, commissioner of the Department of Health in New Jersey, told Consumer Reports, “CBD has promising effects on pain, which could make it an effective substitute for opioids.”

CBD May Help With Severe Football Injuries, Like Concussions and Even CTE

But non-addictive pain relief isn’t the only potential benefit CBD may hold for football players. In particular, the link between the sport and degenerative brain disorders like chronic traumatic encephalopathy (CTE) has become too strong in recent years for even the most diehard football fans to deny.

In 2017, a Boston University study found that 110 out of 111 brains of former NFL players donated for study had CTE. The disorder can manifest in symptoms like confusion, memory loss, impulse control issues, aggression, depression, suicidal thoughts, and progressive dementia.

While research into CBD’s potential effects on brain injuries is still nascent, some intriguing evidence suggests it could have much to offer. In 1998, a study published in the Proceedings of the National Academy of Sciences of the United States of America found that CBD could “protect against neuronal injury” while “[reducing] the occurrence of toxicity or side effects” common to other medications.

The study was so promising that the U.S. government filed a patent on CBD’s use for this purpose (along with other cannabinoids) the very same year. According to the patent, CBD can reduce “neurological damage following … stroke or trauma.”

In the view of cannabis expert Dr. Allan Frankel, this makes CBD an obvious answer for the NFL’s brain injury problem, as he told The Postgame.

“We know it helps healing concussions and so many other disorders, why in the world would we not give CBD to our professional athletes?,” Frankel said. “To me, we’re going to be looking back at this, and history is going to show that the right path was putting people that are batting their heads against other[s ]… on CBD is the most rational thing we could think of.”

Soon, a similar solution could be coming to the American gridiron.