How CBD May Help Cyclists 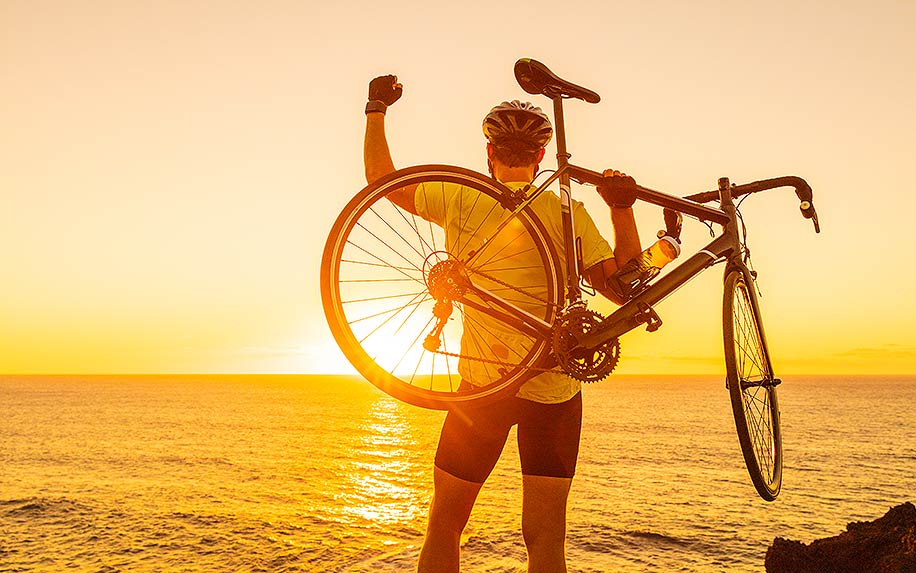 Mentally and physically, CBD may be an ideal companion for cyclists, both on and off the bike. Image Credit: By Maridav on shutterstock.

In 2006, Floyd Landis lost his Tour de France title and his reputation four days after winning the race, when he tested positive for illegal levels of testosterone. But the drugs that haunted him until 2015 were World Anti-Doping Agency (WADA)-approved opioid-based painkillers, which he used to manage pain from a 2006 hip replacement.

Since 2015, Landis has used CBD instead.

“It’s the only thing I use now,” Landis told Outside. “I try not to oversell it, because I don’t want to sound insane. But if you can stop taking other pain medications, if you have a natural solution, that’s probably the better option.”

The next year, Landis founded the cannabis and CBD company Floyd’s of Leadville. Now that CBD has been removed from the WADA list of banned substances, the brand has become the biggest name in cycling-geared CBD products, with a network of nearly 3,000 bike shops distributing its products.

Racing cyclists aren’t the only bike enthusiasts who’ve been getting into CBD. The cannabinoid is also catching on in the high-impact world of mountain biking, led by a man whose friends nicknamed him “Glassboy” for the casts he wore on his wrists.

Finding out what was wrong with him took a long time, but finding a solution took even longer. “The first thing I noticed was I couldn’t do a press up, I couldn’t hold my own body weight up,” CBD Mountain founder Alex Mountain told Pinkbike. “How was I going to throw myself down a hill, get myself round a set of jumps with the aches and pains I had?”

Mountain was eventually diagnosed with rheumatoid arthritis and prescribed the anti-inflammatory drug naproxen — but it gave him stomach ulcers and before long he was back in the hospital again.

Eventually his search for effective relief led him to CBD. “I ended up consuming CBD and it started to help instantly,” he said.

Most recently, a group of cyclists that don’t even think of themselves as such have gotten hip to the trend, as Soulcycle has begun to carry Lord Jones High CBD Formula body lotion.

“So many of our existing users swear by the product to treat sore muscles that result from cycling, strength training, and high-intensity workouts,” Lord Jones CEO and founder Robert Rosenheck told MarketWatch. “CBD acts as an analgesic and anti-inflammatory so it reduces pain and inflammation.”

What CBD Can Do for Cyclists

Cycling requires a different type of endurance compared to other sports — in the quiet miles, athletes are left in the company of their own thoughts, colored by the pain of old injuries. Mentally and physically, CBD may be an ideal companion for cyclists, both on and off the bike.

Cyclists deal with pain, and so does CBD. Beccy Booth is a pro mountain biker who suffers from intense neuralgic headaches on an everyday basis. She believes CBD’s pain-relieving properties have allowed her to continue her career. “Pre-CBD, my absolute limit without being in horrendous pain would be to run 6 miles,” she told Pinkbike. “Since taking CBD I have done several 10-mile off-road trail runs and I don’t have nasty side effects of prescription drugs hindering my riding. I feel more alert and less tired as I’m in less pain and sleeping better.”

For some, CBD is also a mood-booster. Booth has gotten more from CBD than just pain relief — she’s also found it reduces her anxiety. Today, she attributes her more positive attitude to the cannabinoid. “The only side effect I have noticed is an increased feeling of happiness, others have noticed that in me too,” she said. “My mood has improved a lot.”

CBD can relieve arthritis better than painkillers, and without the addictiveness. Kyle Jameson lists arthritis and knee pain among his mountain biking scars. “I was in tons of pain and the pills that were prescribed to me made me feel like [expletive],” he told Pinkbike. “[Now] I use both THC and CBD for pain relief. CBD is my main focus … I’ll load up on some CBD topical creams on those specific areas before and after to keep the swelling down.”