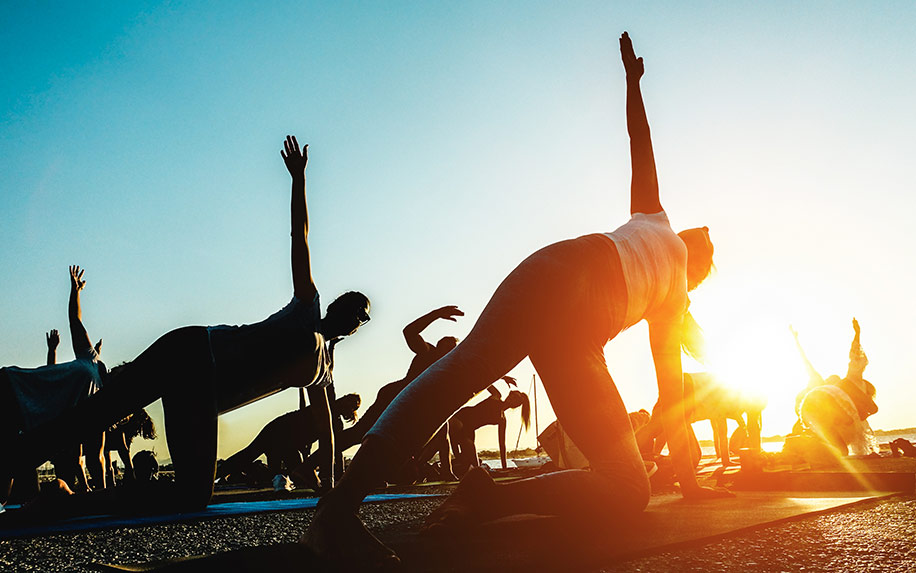 Yoga classes are already dipping into the popular cannabis trend but will it work for actual fitness classes too? Image Credit: By DisobeyArt on shutterstock

While, yes, some cannabis gyms encourage you to free yourself on the treadmill or get into a groovy zone while practicing yoga — others are trying to capitalize on cannabis’s fitness benefits: By blending classes with stimulant strains of cannabis, these new gyms claim exercise buffs are able to push through workouts harder and endure longer.

There’s a second purpose to the trend: Fitness regimens that combine cannabis are intended to help increase stamina while providing relief from pain. This can be accredited to cannabis having anti-inflammatory, pain-reducing, and calming properties.

Keep in mind that research on the physiological impact of cannabis and working out remains limited. Still, a segment of health-conscious people are adding cannabis-infused fitness classes into their exercise routines regardless. Others are simply finding more enjoyment out of the experience by being able to appreciate cannabis before or after a workout.

In 2017, retired NFL running back Ricky Williams financially backed the San Francisco-based facility,  Power Plant Fitness, which claims to be world’s first cannabis gym. Power Plant allows cannabis use while working out — including on gym grounds. Although, Power Plant co-founder Jim McAlpine has repeatedly stressed, “We are focused on the athletic side, not the cannabis side.” McAlpine’s aim has been to de-stigmatize the belief that all cannabis users are lazy and inactive.

High-end Equinox fitness club is another brand to jump in at the start of the trend, offering meditative yoga classes involving cannabis or CBD, along with post-yoga CBD-infused cocktails. In addition, the 420 Games, which first launched in California, is now held in several cities in the U.S, featuring different athletic competitions, including a 4.20-mile run and educational presentations on the health and wellness benefits of cannabis and CBD.

Yoga and Cannabis
Cannabis gyms and cannabis fitness classes may still be somewhat of a head scratcher. Most would agree that cannabis and yoga make much more sense. Meditative yoga is about reaching an elevated state of consciousness, and yoga, in general, is about the mind and spirit as well as body.

Darrin ‘Yogi D’ Zeer, bestselling author of multiple books — including Office Yoga: Simple Stretches for Busy People — has dedicated nearly a decade to incorporating cannabis into his classes, as well as his own devout yoga practice. He spent seven years in Asia studying different variations of cannabis-enhanced yoga. What he found was that yoga practitioners have for centuries practiced a conscious cannabis use; specifically to help them reach higher levels of enlightened consciousness and meditative mindfulness.

Zeer has rapidly expanded the notion of cannabis and CBD-infused yoga classes since 2017 when he offered the first 420 Yoga Retreat in Colorado in 2016. As the plant becomes legal in more and more areas, Zeer has expanded his offerings across the United States and Canada.  “[Cannabis] really helps you connect with your body, you really want to have that embodied experience, it drops you into the moment,” Zeer told the Calgary Herald.