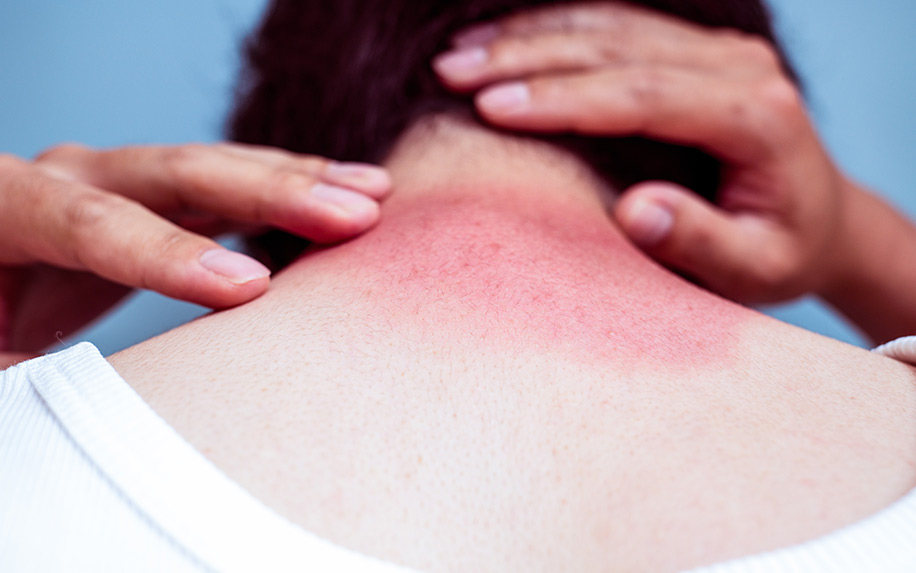 Inflammation can be the cause of many of our bodily problems including skin rashes. Image Credit: By graphbottles on shutterstock

Skin inflammation is never fun: the redness, the itchiness, the feeling that everyone is looking at you. While it might be an unavoidable part of life, there’s also some good news — CBD may be able to help.

Cannabidiol (CBD) has seen its popularity skyrocket over the past several months as claims of its miraculous healing powers spread across the country. It doesn’t take a dermatologist to realize that many of these claims are inflated or even entirely fabricated. However, when it comes to treating inflammation of the skin, the results are in and they’re conclusive: CBD really does work.

To understand why it’s so effective, it helps to know what inflammation is, what it does, and how CBD can work with the body’s natural defenses to help get your skin back to normal.

What Does Inflammation Do to the Body?

Inflammation is a natural response by the immune system. When it detects an injury, an injection, or some other form of attack on the skin, it causes the affected area to become inflamed. This makes the area swell up, providing an extra layer of protection against “the intruder.” In the meantime, white blood cells are sent to the area, and the healing process begins.

You might wonder why you’d want to stop that from happening. After all, shouldn’t you let your immune system do what it needs to do? Well, yes — most of the time, there’s not much sense in intervening with this normal process. But sometimes, inflammation can become so severe or persistent that it begins to impact your life. When this happens, using an effective anti-inflammatory can help accelerate the healing process and ward off any long-term consequences.

So when does inflammation become a problem that needs solving? There are many different types of inflammation, with symptoms ranging from mild and manageable to harsh and debilitating ones.

For example, in all kinds of eczema (the most common types include atopic dermatitis and contact dermatitis), the skin can become inflamed. This causes it to look swollen and red, which can affect a person’s body confidence and self esteem. On the other end of the spectrum, conditions like Crohn’s disease and rheumatoid arthritis that are caused by chronic inflammation can be so troublesome that they force people to change their diets and their daily routines. In the most extreme cases, these conditions can even be life-threatening.

The medications commonly prescribed for the treatment of such cases can have unpleasant side effects, so lately there has been a notable shift towards more natural remedies. As a promising anti-inflammatory, CBD could offer the side effect-free alternative that people have sought for years.

What Is CBD and What Are Its Effects?

If you’re living in America, or anywhere in the West for that matter, it’s highly unlikely that you haven’t heard of CBD yet. But even those who have heard of it often don’t know all that much about it.

Here’s the quick version: CBD is a cannabinoid, a chemical compound that’s found in cannabis plants. There are more than a hundred other such compounds (such as THC, the one that causes the high), but CBD is the one that has exploded in recent years as a health and wellness trend. Besides just being trendy, there is a growing body of scientific research that suggests it may hold great medicinal promise in many areas.

As well as its ability to tackle inflammation, CBD can have a host of other positive impacts on the body. It’s now becoming a mainstream ingredient in skin care products, thanks to its anti-aging qualities (among other things). It’s thought to relieve stress and anxiety and to promote sleep (though not in the way you’d think). Scientists have discovered that it can have a significant effect on seizures in some forms of epilepsy, and it’s even being studied as a potential treatment for Alzheimer’s disease.

However, it’s not all good news in the world of CBD right now. There is a serious lack of regulation when it comes to CBD oil and CBD products, despite the industry’s pleas. This is causing all sorts of problems, including the fact that the general public is being scammed by brands saying that their products contain CBD when in fact, they don’t. It’s also led to crackdowns on CBD foods in eateries around the country, and a general feeling of confusion when it comes to CBD’s legality.

However, when it comes to reducing inflammation, there’s nothing to be confused about: CBD actually works.

How CBD Can Help Reduce Inflammation

In the 1990s, researchers discovered an internal modulator known as the endocannabinoid system (ECS), a complex system of receptors that controls many important bodily functions. These receptors, which helped regulated mood, appetite, and sleep (among other things), were activated by chemicals called endocannabinoids, which are produced within the body — and have effects that are remarkably similar to cannabinoids like CBD.

By activating the receptors of the ECS, both cannabinoids and endocannabinoids are able to affect the body in a startling variety of ways. Reducing inflammation is one of these. By taking CBD on a daily basis (and choosing the right variety for your needs and preferences), you can help the ECS maintain a healthy balance of cell production, oil secretion, and more, all of which will help prevent unwanted inflammatory outbreaks.

CBD can be equally effective for many different types of skin inflammation, from everyday acne breakouts to itching rashes caused by allergic reactions. Although the vast majority of these cases aren’t going to cause significant long-term damage to the skin, they can have an ongoing impact on your self-perception and mental health.

So if you’re looking for a safe, natural, and effective way to put your skin (and your mind) at ease, CBD might be worth a look.