A Group Of California Nuns Are Shaking Up CBD Skin Care 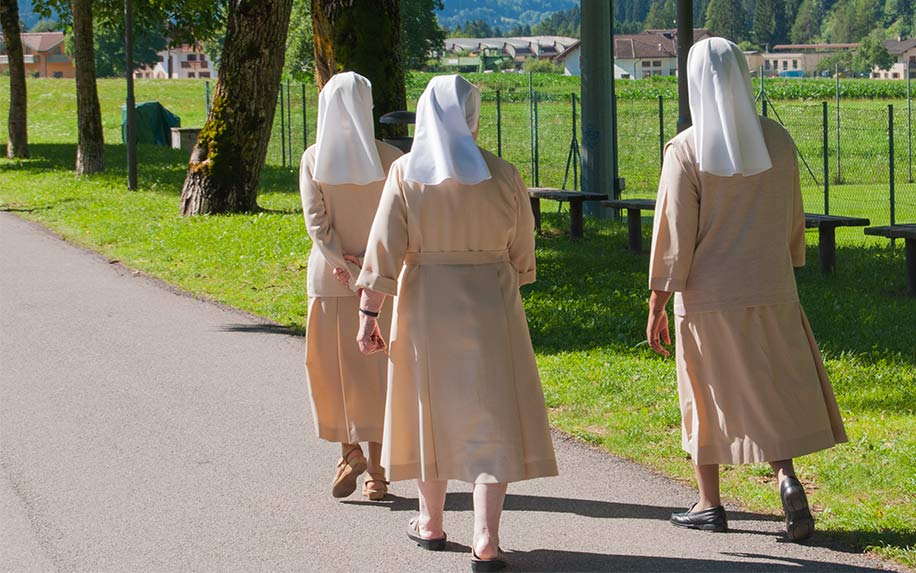 However, the Sisters’ main aim isn’t to spark historical discussions or get people stoned, but to heal the planet and everyone who lives on it: "We are healers."By Simona Balconi

Of all the (many) players in the CBD skin care game, the Sisters of the Valley are perhaps the most unique. A group of secular nuns dedicated to the empowerment of women, they’re on a quest to better the world through the creation of holistic wellness products infused with CBD.

Taking their inspiration from the medieval Beguines, the Sisters have been affectionately dubbed the “weed nuns”. And similarly to religious nuns, they’ve each taken vows, but the six vows required of these Sisters are a little different.

According to the order, which was founded in 2015, these are: “A vow of servitude – which is making medicine with the cannabis plant, in serving the people; a vow of obedience to the moon cycles, as we make all our medicine within this cycle; a vow of ecology, to protect the earth; a vow of activism, to protect the plant and access to it; a vow of ‘living simply’; and a vow of chastity, though we don’t believe you have to be celibate to be chaste.”

The Sisters’ products — which include tinctures, salves, and soaps — are distributed and sold in accordance with those principles. On top of that, they’re also made exclusively during moon cycles using natural, vegan ingredients, like CBD extracted from cannabis plants grown and harvested on their own land in Merced County, California.

Those plants are as unique as the Sisters themselves. According to Sister Kate, the group’s leader (whose real name is Christine Meeusen), “It’s considered hemp because it won’t get anybody high, but it’s really marijuana,” as she told ABC News. “It’s medical marijuana, but just like over the years they’ve been able to develop strains that get you super high. We’ve also developed strains that don’t get you high at all.”

That doesn’t necessarily mean that the Sisters are opposed to cannabis’ intoxicating effects. As one anonymous Sister told the outlet All That’s Interesting, “We believe cannabis oil was the other holy oil of the bible.” She also said that if Jesus were a real person, “he probably smoked [cannabis].”

However, the Sisters’ main aim isn’t to spark historical discussions or get people stoned, but to heal the planet and everyone who lives on it. “We are healers,” Sister Kate told Civilized. “We heal when we contribute positively in the world. This is God’s plant and we are doing His good work. People are healing and that’s really all that matters.”

The CBD industry, like the cannabis industry in general, has recently attracted criticism for its environmental impact. From wasteful, excessive packaging that clogs landfills to water contamination caused by unsafe growing practices, many observers have voiced worries that Americans’ hunger for CBD is putting additional stress on already-vulnerable ecosystems.

The Sisters’ vow of ecology addresses those concerns directly. According to Sister Kate, the order is devoted to living sustainably, they incorporate this intention into their everyday practices, including production.

“Every January 1st, our whole New Year’s thing is all about another step towards living in better harmony with Mother Earth and less pollution and less footprint,” she told the outlet Live Kindly. “We’ve got a plastic crushing machine so we can take our plastic coconut bottles and turn them into bricks and maybe build a chapel out of it,” she added.

The Sisters are also searching for other ways to make their operation more sustainable. “We’re a bit ashamed that we are curing our cannabis in Tupperware and Ziplock bags,” Sister Kate told HuffPo, saying that she’s currently investigating the practicality of using woven hemp products instead.

One of their most environmentally sustainable practices, though, might simply be growing hemp itself. Hailed by many as one of the most eco-friendly plants in the world, it’s been used for everything from biofuels to building materials. Hemp can also be used to make biodegradable plastic, offering a potential (though still economically unfeasible) solution to the planet’s plastic pollution crisis, while hemp “wood” could help address deforestation problems around the world.

For the Sisters of the Valley, every little bit helps. As Sister Sierra (whose real name is Sierra Walker) told ABC News, “We give our hearts and our minds and our souls to what we are doing here. And I think that we’re … doing a marvelous job, and I think it’s the revival that we needed in our world.”