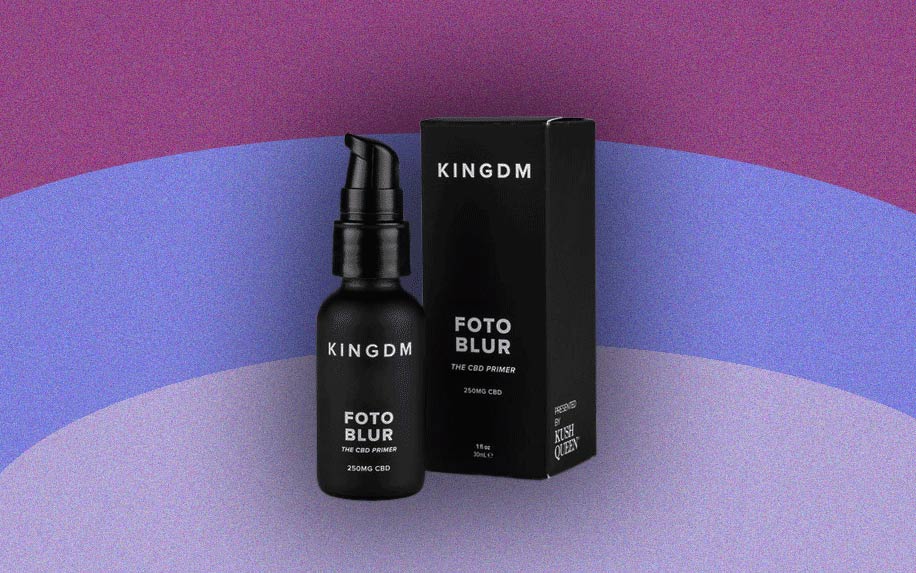 At the beginning of the summer, I met a cannabis industry expert and spoke to her about CBD in makeup, specifically which products would make the most sense for the ingredient. The topic of makeup primer came up, and the both of us agreed that this would be interesting to see. After all, it’s something that is underneath your makeup and directly on your skin, allowing it to be absorbed by your system throughout the day. So when I heard that Kush Queen was coming out with a makeup primer, I was excited to give my usual ones a break for a few weeks and put this one to test.

When it comes to the business of CBD topicals, Kush Queen is one of the original pioneers. The brand is known for its cannabis bath products, especially its famously infused bath bombs, and it recently launched a CBD-infused makeup line called KINGDM. The first product is Foto Blur: The CBD Primer, which boasts the usual promises a primer does, like blurring the appearance of pores and allowing a smoother complexion and canvas, but with the added anti-inflammatory benefits of CBD. This means getting rid of redness and protecting against breakouts. That’s a lot to live up to.

According to Kush Queen, to formulate Foto Blur, it uses a proprietary nanotechnology which creates CBD molecules 2,000 times smaller than your pores, allowing the primer to be absorbed directly into your bloodstream. And the packaging is simple: a matte black 1-ounce bottle containing 250 mg of Kush Queen’s hemp-derived CBD isolate.

There’s not much to say for this — Foto Blur’s scent is light enough where it doesn’t really smell like anything, which is a good thing, especially if you tend to use foundations that are heavily fragranced.

The consistency is very light. It has a wet, lotion-like texture that reminds me more of a serum; it’s different than other primers I regularly use. Upon rubbing it into my skin, it was immediately absorbed and left a soft, velvety feel. It contains the normal ingredients you see in primers: silicones like the dimethicone and cyclopentasiloxane that give it a smooth base for makeup, as well as squalane, a common cosmetic emollient that has anti-inflammatory properties like our good friend CBD. If I could compare it to any of the primers I’ve tried, I’d say it’s similar to Tarte’s Base Tape Hydrating Primer or Marc Jacobs Beauty Under Perfecting Coconut Face Primer when it comes to consistency.

I ended up really enjoying this primer, so much that I used it a lot longer than I had planned to test. My skin felt hydrated after applying it and my foundation went on smooth and lasted well and stayed in place throughout the day. I have oily/combination skin and large pores, and thicker primers, like Tatcha’s The Silk Canvas, tend to “fill” up my pores in order to create that super smooth surface. This one didn’t do that. I also noticed that my skin was less red, which was something I tested both on my face and arms (which tend to be red and slightly bumpy), so that was interesting. Was it the CBD at work? It might be!

Is KINGDM Foto Blur Primer Worth It?

I’m going to admit, I’m really impressed by Foto Blur. I’d say it’s great for an everyday primer, especially if you are wearing light-to-medium coverage foundation. If I wanted to do full-coverage and “fill” up my pores so I have flawless mannequin face (which, yes, I do love to do), I’d probably opt for a more heavy-duty, cream primer. But the fact that it really toned down my redness really sold me. There are supposed to be THC versions of KINGDM’s products coming in the future (which will include foundation and a setting spray) so I’ll be interested in comparing those to the CBD line. If you want to give KINGDM’s Foto Blur CBD Primer a go, you can buy it for $40 at Kush Queen’s website.

Marie Lodi is a LA-based writer and editor covering beauty, fashion, and cannabis. She is also the co-host of Fishnet Flix, a podcast about fashion in film and runs the food blog The Bloodfeast.