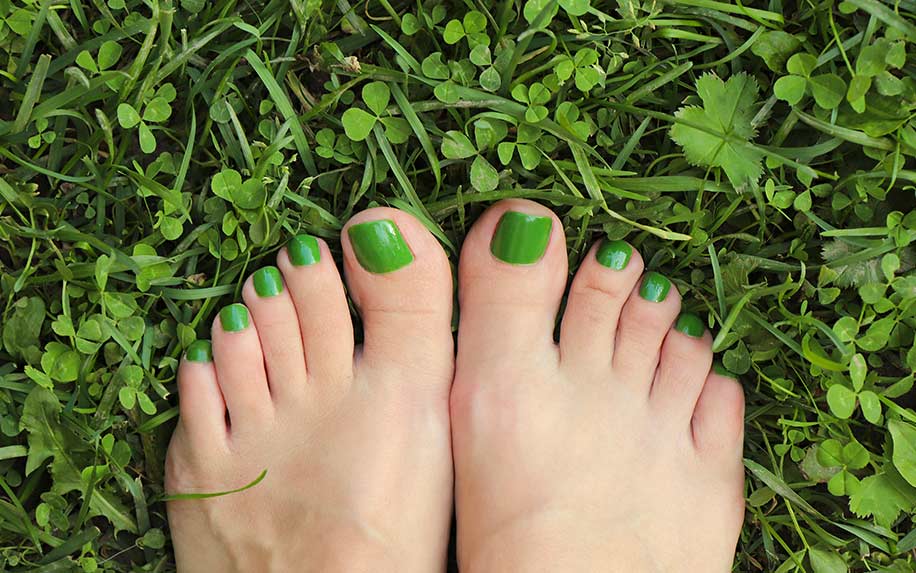 On the official Scale of Extremely Relaxing Activities, which is very much a real thing that you don’t need to Google, a nice pedicure is right at the top. Whether you’re having the week from hell or just a tough day at work, few things are more soothing than an hour spent reading a trashy magazine while having your feet tended to. And adding a little CBD to the equation might take your relaxation (and your nail game) up yet another notch — at least if you believe the hype.

CBD pedicures have earned rave reviews from Forbes, Fashionista, Nails Magazine (yes, that’s a real thing), and approximately ten billion beauty bloggers on YouTube. Their popularity is a sign that while CBD beauty may have its critics, it still has a lot of fans, too, and they’re willing to pay a premium price for anything containing a whiff of their favorite non-intoxicating cannabinoid. (Just ignore those admissions from beauty execs that CBD skin care is mostly a scam).

Like bacon on a cheeseburger, a CBD-infused pedicure seems like an upgraded version of an already-excellent thing. Their obvious appeal has already made them a staple in the chilled out “CBD spaces” now popping up in high-end retailers such as Saks Fifth Avenue, and few stressed-out young people with a taste for wellness (and/or high heels) need to be convinced that it’s a good idea to put their feet up and treat themselves. Adding a dash of the trendiest ingredient in beauty certainly doesn’t hurt, either.

But the question remains: If you get a CBD pedicure, are you paying for anything more than the placebo effect?

The 4-Part Guide to CBD Pedicures

The process of getting a CBD pedicure is much like getting a standard one: It follows the same basic routine of soak, scrub, moisturize, and paint. The real difference comes from the products used (which we’ll discuss in a moment). Swapping out one moisturizing cream or nail polish for another might seem like a simple change, but it comes with a number of ripple effects.

So to help you decide if a CBD pedicure is right for you, here’s everything you need to know about them:

How Much Does a CBD Pedicure Cost?

CBD is expensive, so it stands to reason that CBD pedicures would be pricier than their conventional counterparts. And since “enhanced” pedicures were first popularized in upscale spas and salons in cities like New York and Los Angeles, you might expect them to be exorbitantly expensive — but here you’ll be pleasantly surprised.

Prices tend to vary from location to location, but in most cases a CBD pedicure will run you somewhere between $50-$65. As far as CBD-related upcharges go, that’s relatively mild: Standard pedicures usually cost $35-$45 at a typical salon.

You won’t have to buy a plane ticket to get one, either. The CBD pedicure trend has now spread across the country, with services available both in states that have fully legalized cannabis (like Nevada) and those that haven’t (like Minnesota). However, the number of spas and salons that offer them are still outnumbered by the ones that don’t, so you’ll want to double check before you head to your favorite nail artist with hopes of an infused pedicure.

Which Products Are Used During a CBD Pedicure?

This is where CBD pedicures really stand out. During a typical pedicure, you might start by soaking your feet in a tub of warm water with essential oils or epsom salts. For an infused one, those products might be replaced by a CBD bath bomb or bath salts. In theory, these are equally adept at prepping your feet for their upcoming scrub while also bringing a little extra to the table (keep reading to find out what that little extra might be).

Now, on to exfoliation. While a typical pedicure might involve ridding your feet of dead skin cells with a foot scrub and a pumice stone, a CBD-infused one will keep the stone but trade the product for a CBD sugar scrub or something similar.

For the moisturizing/massage stage (everyone’s favorite), the same rules apply: The artist will swap out that basic cream or lotion for a CBD cream or lotion, and rub away. Pro tip — try not to look so disappointed when they stop.

When it finally comes time to paint your nails, there might not actually be much of a difference between CBD pedicures and standard ones. CBD nail polishes are still quite rare — even regular old hemp nail polishes are hard to come by — and the selection is as limited as you’d expect. So don’t be surprised if your artist reaches for the same set of colors they did the last time you came in.

The (Potential) Benefits of a CBD Pedicure

Here’s where it gets complicated. Many people walk into a CBD pedicure thinking, “Ah, CBD! I’ve heard it can help with my anxiety. I’ve also heard it can help relieve pain. Surely all these infused products will leave me feeling as serene and sprightly as those people in the ads I suddenly can’t escape from!”

They certainly could — but it might be due to the placebo effect more than anything else. Many CBD skin care products contain a relatively low amount of the titular ingredient. For example, your artist might use a cream that comes in a 4 oz. jar with 50 mg of CBD, meaning that you’re getting at most a few milligrams rubbed into your aching ankles. While there are still no recommended dosage guidelines for CBD — thank you, Food and Drug Administration (FDA) — that’s almost certainly not enough to make a difference.

On top of that, most CBD topicals have a major problem: They can’t actually penetrate deep enough into the skin to deliver their benefits to where they’re needed most. Some brands are developing nanotechnologies that could, theoretically, fix this issue, but we’re not quite there yet.

It’s not all bad news, though. CBD’s antioxidant properties can be useful even on just the (literal) surface level, and its ability to fight free radicals and hydrate the skin are a plus for the pedi-curious.

And the (Potential) Downsides of a CBD Pedicure

Assuming that your nail artist knows what they’re doing, a CBD pedicure doesn’t have any special risks compared to a standard one. The products won’t make you high, no matter how much you use, nor will they make you sick (as long as you don’t try to eat them, which, why would you?). The general consensus among scientists is that CBD is an exceptionally safe substance, especially in topical form — which could be partly due to the fact that not enough of it reaches your bloodstream to have any noticeable effect.

That’s the main issue with CBD pedicures, in fact: There’s just not a lot of evidence that all the upscale products they involve can make a tangible difference on your anxiety or pain levels, and their skin care benefits might not be much greater than those of conventional products, since it’s difficult to know which ingredient is doing the heavy lifting.

However, if you’re infatuated with CBD and not opposed to forking over a few more dollars, then there should be little stopping you from trying an infused pedicure.