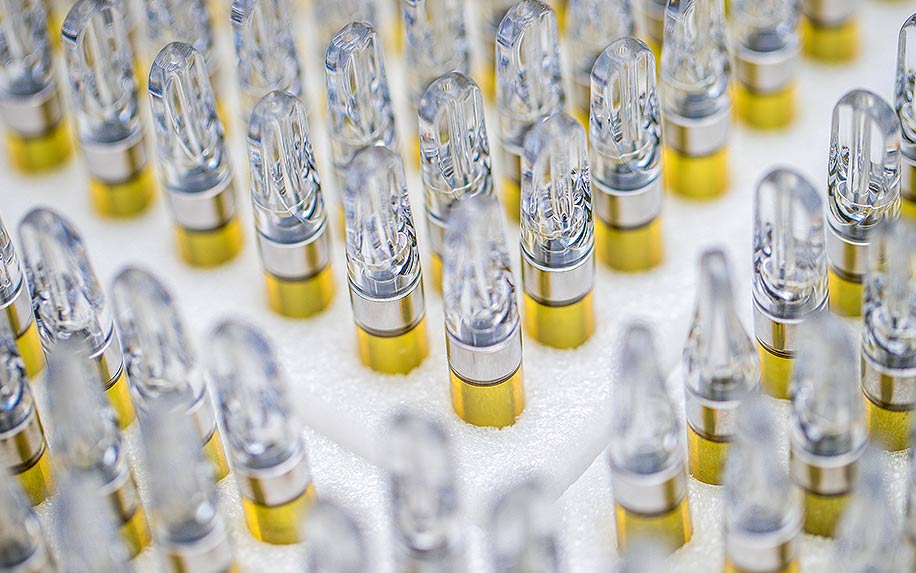 Ever since the first vape devices hit the American market in 2006, counterfeit THC vape products have been a cause for concern among government authorities, legal cannabis businesses, and consumers alike. Now that a rash of severe vaping-related respiratory illnesses (and even deaths) have been linked back to black market cannabis vape cartridges, it’s become impossible to ignore this long-simmering problem any longer — and America is finally starting to take action.

Governments and Businesses Are Cracking Down on Fake THC Vape Products

Authorities across the country have put a renewed focus on stamping out the supply of these fake THC vape products. In mid-September, U.S. Customs and Border Protection (CBP) officials intercepted a shipment of 600 counterfeit vape cartridges that had been shipped from China to Philadelphia. A week later, police in Georgia seized over 2,000 fake THC vape cartridges. And recent crackdowns in Wisconsin and Minnesota, both early centers of the vaping illness epidemic, netted hauls of 31,000 and 77,000 counterfeit THC vape cartridges, respectively.

Some businesses are also doing their part to prevent the spread of fake THC vape products, though their efforts to date have been scattershot. Perhaps the most notable is Amazon. The online retail giant — which formerly stocked empty vape cartridge packages with the same branding as those implicated in the recent outbreak, like Dank Vapes and Exotic Carts — pulled these products in September. However, it’s still possible to find unbranded vape cartridges and “California compliant” cannabis stickers (which can be used to trick consumers into thinking a product is legal) on Amazon’s website.

Thanks to the continued availability of materials like these — and the huge profits that black market dealers can make off fake THC vape products — counterfeit cartridges continue to be a problem around the country, even in states where cannabis is legal.

While some have suggested that tighter regulation (or nationwide legalization) is the answer to the ongoing cannabis vape crisis, neither is likely to come in the immediate future. As a result, consumers are faced with two choices: Quit vaping entirely, or educate themselves on how to detect and avoid counterfeit products. Watchdog groups like @thedojoapp, which posts images of common counterfeits on Instagram, can be a useful resource — but as new black market “brands” continue to emerge, the best bet for staying safe is learning to recognize the warning signs for yourself.

With that in mind, here are five signs that your THC vape cartridge might not be legit:

Many black market THC vape cartridges sell for around $20 — which isn’t nearly as much as they’re supposed to cost. In Los Angeles, for example, the going rate for a half-gram cannabis vape cartridge is $45, including nearly $13 in tax. If you’re paying much less than that, you’re likely getting a bootleg product.

Cannabis dispensaries are well-known for being expensive, and many consumers have complained about their inflated costs for products like THC vape cartridges. However, in this case the extra money is a small price to pay for avoiding a serious lung illness.

Samantha Miller, chief science officer and founder of cannabis testing lab Pure Analytics, told Leafly that users should be on the watch for products whose THC content is marked below 60 percent, as anything under that mark is likely cut with a potentially dangerous substance.

It’s also wise to beware of vape cartridges that claim to contain nothing but pure (or nearly pure) THC. While many legitimate THC vape cartridges do contain extremely high levels of THC — it’s not uncommon to find products with 80 or even 90 percent THC — if you encounter a vape cartridge that touts a 99 percent potency level, you should probably steer clear of it.

This might seem like an obvious one, but some black market dealers claim to source their wares from states like Colorado or California, where cannabis is legal (and the products, presumably, are of higher quality). Oftentimes, they’ll claim to have a connection in a dispensary or processing facility who can help funnel “legal” cannabis products to states that have yet to legalize.

Here’s why that’s highly unlikely to happen in real life: The payoff simply isn’t worth it. Legal cannabis businesses would lose their licenses for participating in such a scheme (which is why they have such stringent safeguards in place to prevent them), and black market dealers don’t have a profit incentive for doing so anyway. It would entail a great deal of effort, risk, and cash upfront, making it much more enticing to simply go through a local illegal manufacturer instead.

Though Amazon has now removed empty branded vape cartridges from its site, that doesn’t mean they’ve disappeared from the internet.

Chinese marketplaces like Alibaba and DHgate.com continue to keep counterfeiters supplied with packaging for legit brands like Brass Knuckles, Heavy Hitters, Dank Vapes, King Pen, and Stiiizy. Most of these companies are aware of the problem and some, like Brass Knuckles, have published guides to help identify imitators.

Unfortunately, counterfeit package makers have proven quite responsive as well, adding details like holograms and QR codes that were once the telltale signs of a legitimate brand. Sometimes, they’re even scannable — though if you’re directed to an irrelevant or curiously vague page, that should be a warning sign.

Most legal producers of THC vape cartridges send their products to be tested for purity and potency by independent third-party laboratories, which then provide a certificate of analysis (COA) to confirm the product is safe and effective. However, COAs have also been co-opted by some counterfeiters, who use photoshopped (or even entirely fraudulent) lab results to lure consumers into a false sense of security.

To determine if a product’s lab test is legitimate, the first step is to check if the lab even exists (a quick Google search should do the job). If you’re still suspicious, it’s worth contacting the lab and providing detailed information about your product, like its brand, batch number, and manufacturing date. If the lab has no record of testing that particular product, toss it in the trash.