What’s in a CBD Lab Test: Understanding Cannabinoids and Terpenes 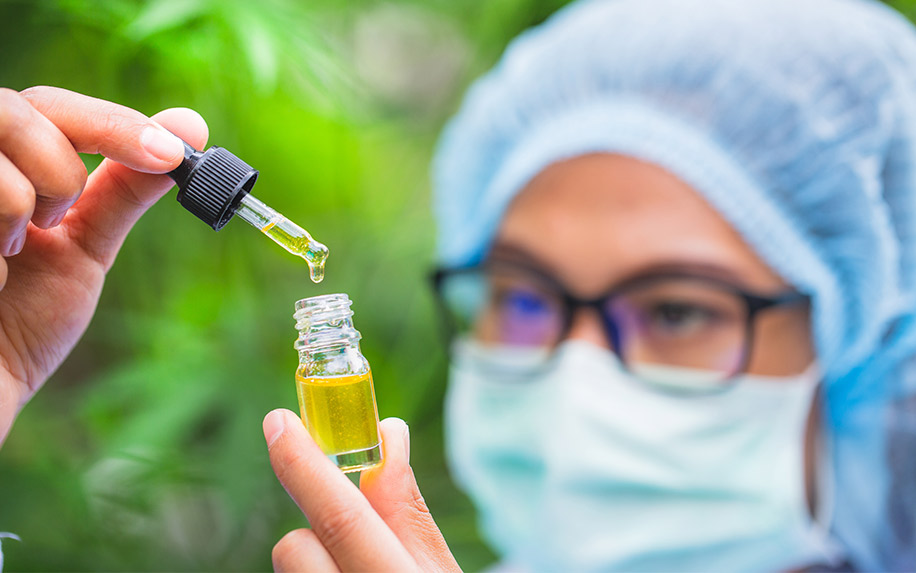 Lab tested CBD products stand out among the rest, proving to be safe and scientifically approvedImage Credit: By Tinnakorn jorruang

When you’re thinking about buying a CBD product, the first question to ask is: Has it been tested by an independent third party lab?

Not only can this ensure that your CBD product is legal (under federal law, it has to contain less than 0.3 percent THC), but it can also help ensure your product is free of harmful substances like pesticides, solvents, mold, and mildew. Lab tests look beneath what’s on the label (which is often inaccurate, since many companies overstate the amount of CBD in their products or even use synthetic cannabinoids as a substitute) and give a clearer picture of what’s really in your vape oil, topical, or bag of gummies.

To do so, most testing labs use three types of tests: analytical chromatography (AC), mass spectrometry (MS), and nuclear magnetic resonance spectroscropy (NMR). We’ll spare you the AP Chemistry details, but the important thing to know is that these tests all evaluate the sample’s compounds on a molecular level — using different techniques — to provide a snapshot of exactly what they do (or don’t) contain.

Aside from assuring you that your CBD product is free of the stuff that can make you high and/or sick, these lab tests can also give you a clearer picture of the medicinal compounds it has to offer. There are two classes of compounds that are especially important — cannabinoids and terpenes, both of which we’ll discuss in greater detail now.

The Most Common Cannabinoids

Scientists have currently identified over 110 cannabinoids in the cannabis plant — there’s still some disagreement over their exact number — with more discoveries likely on the way (just a few months ago, researchers from the University of Mississippi confirmed the existence of seven previously-unknown cannabinoids). Cannabinoids are grouped into nine distinct “families,” though a handful are still unclassified due to a lack of information about their attributes and effects.

At the moment, the two most widely known (and best studied) cannabinoids are delta-9–tetrahydrocannabinol (THC) and cannabidiol (CBD). These are also the first things most people check on a lab test — to make sure the product won’t get them high, in the case of the former, and to ensure it’s capable of living up to its therapeutic claims, in the case of the latter.

However, most lab tests also evaluate the presence of other notable cannabinoids as well, such as:

Many tests also measure the acid forms of CBD, THC, CBG and CBDV — called CBDA, THCA, CBGA and CBDVA, with the “A” standing for “acid” — which transform into their “finished” forms when heat is applied.

Some tests measure the ratio of CBD-to-THC as a compliance measure, as many states with medical cannabis regimes specify proportions of CBD-to-THC that legal CBD products must meet or exceed. For states without legal cannabis, the question of THC content is even more crucial, with 0.3 percent the maximum amount of THC a hemp-derived CBD product can contain while still being considered legal under the 2018 Farm Bill.

THC is also of interest for its medical benefits — and the fact that CBD on its own has been shown to be less effective than when it is extracted along with the plant’s full array of therapeutic compounds, something that researchers have called the “entourage effect.”

As research into other cannabinoids expands in the wake of the Farm Bill, these lesser-known compounds will likely gain a higher profile in CBD products (or even dedicated products of their own):

CBN might be the “second tier” cannabinoid with the brightest immediate future — its sedative effects make it an attractive option for people seeking help with sleep disorders. A study from one of the country’s most prominent testing labs, Steep Hill, found that 5 mg of CBN is as effective as 10 mg of the pharmaceutical sedative diazepam, which has made it a newly-popular component in specialized vape pens and other products.

CBG is another cannabinoid that has attracted greater attention recently, with evidence showing it to be the parent compound of all the other cannabinoids. When extracted before its transformation into other cannabinoids, it can be used to boost anandamide, the body’s naturally-occuring equivalent of THC, which increases dopamine levels and is responsible for regulating various physiological symptoms such as mood, sleep, and appetite. Some researchers now believe anandamide is also responsible for the famous “runner’s high” experienced by triathletes and other fitness buffs.

THCV is structurally similar to THC (though it’s not psychoactive). Recently, it’s garnered attention for its effects on appetite suppression, anxiety, and the treatment of neurological diseases. In addition, it’s being studied by the makers of the first FDA-approved CBD-based drug, Epidiolex, for applications in the treatment of type 2 diabetes.

CBDV is also being investigated by Epidiolex’s makers, GW Pharmaceuticals, for its effects on another rare childhood epileptic disorder, Rett syndrome.

The Most Common Terpenes Found in Your CBD

The vast majority of lab tests also examine a CBD product’s terpene content. These organic chemicals comprise a smaller percentage of a hemp or marijuana plant’s total makeup than cannabinoids, but they have their own potential therapeutic benefits, and they’re one reason that full spectrum CBD oils (which contain all the plant’s natural compounds, including the full range of terpenes and cannabinoids) are more effective than isolates, which contain only CBD.

Although little research has been done on cannabis-derived terpenes, a good deal is known about the effects of these essential oils elsewhere in nature. Some bind directly to the endocannabinoid system, and a 2011 study published in the British Journal of Pharmacology claims they “could produce synergy with respect to the treatment of pain, inflammation, depression, anxiety, addiction, epilepsy, cancer, fungal and bacterial infections.”

Here are some of the most common (and important) terpenes you’re likely to encounter in your CBD product:

Alpha-pinene is the same terpene that gives pine forests their distinctive scent, and it’s the most widely distributed in nature. This terpene has a demonstrated effect as a bronchodilator, which helps to open the airways and is useful in the treatment of asthma. In addition, it has antibacterial properties that are strengthened in the presence of CBD.

Limonene, common to lemons and other citrus, is the second-most prevalent terpene in nature and has shown evidence of being a powerful anxiolytic agent. As well, it has been shown to cause the death of breast cancer cells and help with gastro‐esophageal reflux.

Beta-myrcene, which is also found in bay leaves and hops, has a powerful sedative effect, and has also been shown to block toxins that contribute to liver cancer.

Linalool, the most dominant terpene in lavender, has both psychoactive effects on reducing anxiety and seizures, and topical applications in the non-scarring treatment of burns.

Caryophyllene, a key component in black pepper, is an anti-inflammatory, and perhaps more significantly, it can bind with the CB2 cannabinoid receptor. It is the first proven phytocannabinoid beyond the cannabis genus.

Bisabolol, sometimes known as alpha-bisabolol, is a secondary terpene that has long been used in a variety of beauty products. It’s shown promising results for treating skin conditions thanks to its anti-inflammatory, antimicrobial, and antioxidant qualities.

Eucalyptol also goes by the name cineole, and while it’s the primary terpene in the eucalyptus plant, it’s only present in trace amounts in cannabis. However, it’s shown promise as a bronchodilator (i.e. a substance that helps you breathe easier) and as an anti-inflammatory.

Trans-nerolido is another minor terpene in cannabis, though it’s also found in lemongrass, jasmine, and other plants. It’s known for promoting relaxation and sleep, and scientists believe it could also be useful for its antibiotic, antifungal, and antiparasitic properties.

Humulene is a terpene that counteracts one of cannabis’ best-known effects: It actually suppresses hunger. Aside from this, it’s emerged as a potentially useful treatment for inflammation, bacterial infections, and tumors.

Delta-3-Carene, which is commonly used in cosmetics and perfumes, can also be found in plants like bell peppers and cedar trees. It’s a natural antihistamine, and studies have shown it has promise for treating conditions like osteoporosis and fibromyalgia.

Camphene is another secondary terpene that has been used in perfumes, food additives, and other everyday items for years. Scientists have been intrigued by its antioxidant potential, as well as its ability to support cardiovascular health.

Borneolhas been a staple in Chinese medicine for over 400 years thanks to its ability to reduce pain and inflammation. Sometimes known as “moxa,” it’s also been used as a treatment for anxiety, and it shows promise as a neuroprotectant and antioxidant.

Terpineol is one of the most versatile terpenes in the cannabis plant. Aside from its effects on pain and inflammation, studies have shown it could reduce both seizures and stomach ulcers, while others have highlighted its antimicrobial potential.

Valencene is named after its most famous source, Valencia oranges. Scientists have yet to study it in significant detail, but some believe it could help repel insects as well as manage inflammation.

Geraniol, too, takes its name from a beloved plant: Geraniums, where it’s responsible for the flower’s signature aroma. Commonly used in skin care products, research to date has identified a long list of geraniol’s potential therapeutic properties, including antiviral, antispasmodic, antibacterial, antitumor, antioxidant, antifungal, and neuroprotective ones.