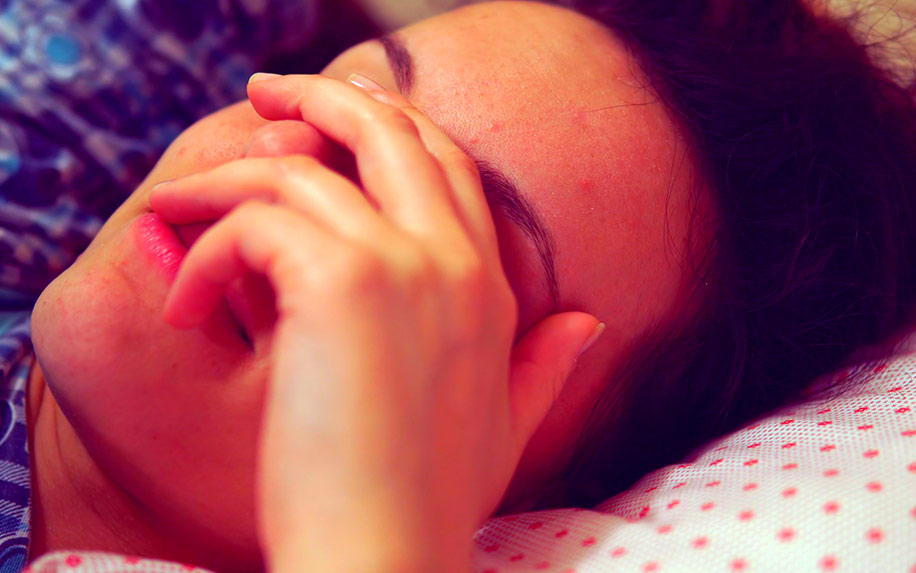 It’s 3:30 a.m., and you’re staring at your alarm clock. Already, you’re dreading the day ahead of you — a morning of chugging coffee, an afternoon of struggling to stay awake through conference call after conference call. Then by nightfall, you’ll be wide awake again. It feels like the universe is taunting you, but what can you do?

Well, if you’re like a growing number of Americans, you reach for your CBD. And if you’re an especially trendy sort, it comes in the form of a CBD sleep strip.

CBD sleep strips are one of the latest cannabis-based products aimed at helping people solve their sleep problems, and they’ve come around at the right time. According to an August 2019 Gallup poll, better sleep is one of the top reasons Americans use CBD, and it’s sorely needed: The Centers for Disease Control and Prevention (CDC) estimates that over one-third of adults in the United States don’t get enough sleep.

They won’t get you high, but CBD sleep strips could help you mellow out enough to get a decent night of shuteye, at least in theory. Unlike edibles, they won’t take hours to kick in, and unlike other newfangled products such as “wellness drinks,” their delivery method actually makes sense (more on that later).

Are they worth the money, though? Here’s what you should know about CBD sleep strips.

CBD sleep strips haven’t quite reached the ubiquity of gummies (even mattress companies are selling those now), but you still have a fair number of options.

One of the newest products to hit the market comes courtesy of Wyoming-based CBD company ABLE. The brand recently released its Tri-Sleep Strips, which come in a bundle of 30. Each of these mint-flavored strips contain 27.5 mg of a “proprietary blend” of CBD and terpenes. They’re available on ABLE’s website for the low, low price of (gulp) $99.

High price tags are a common theme among CBD sleep strips. Kin Slips’ Shut Eye have an even steeper per-piece price ($56 for a pack of 10) with even less CBD content (3.9 mg per piece). Also, they’re only available in licensed dispensaries in the brand’s home state of California.

For a more affordable option, you could turn to Spectrum’s Hemp Sleep Strips. The Texas-based brand sells a 10 pack of strips on its website for just $30. Each strip contains 10 mg of CBD (according to the brand, that’s the product’s only ingredient, which seems a bit dubious). It’s worth mentioning that Spectrum’s sleep strips are made with CBD isolate, which many researchers believe is less effective than other types of CBD.

How Do You Use Them?

Using sublingual strips like these is pretty straightforward. Just put them under your tongue, wait a minute or two, and voila, you’re done.

You’ll want to avoid swallowing during that time, though, because that would defeat the purpose of a sublingual strip. The soft, permeable tissue underneath your tongue — called the oral mucosa — offers a direct pathway for cannabinoids like CBD or CBN to enter your bloodstream. This makes them work more quickly and effectively. If you swallow, the cannabinoids will have to pass through your digestive system, which could A) take a while and B) make them less potent.

With the exception of Spectrum, most brands making CBD sleep strips include other ingredients that are supposed to support sleep as well.

In ABLE’s case, each strip also comes with 10 mg of 5-hydroxytryptophan (5-HTP) and 1.5 mg of melatonin. If something about that first ingredient strikes you as familiar, it’s because 5-HTP is closely related to tryptophan, which is famous (notorious?) for making you sleepy after a big meal of Thanksgiving turkey. Melatonin likely needs no introduction, as it’s one of the most popular non-pharmaceutical sleep aids out there.

Kin Slips’ Shut Eye slips come with 4.1 mg of CBN, another non-intoxicating cannabinoid that has attracted attention for its sleep-promoting abilities.

Given the fledgling nature of cannabis research in general (and CBD research in particular), it’s unsurprising that no clinical studies have yet examined whether CBD sleep strips are effective or not.

However, administering CBD through the oral mucosa has been shown to be effective at treating other conditions like pain. According to a 2018 study in the journal Cannabis and Cannabinoids Research, this delivery method offers “a non-invasive method of administration that has proven itself to be significantly superior to oral dosage in the relief of pain.”

It’s not the most ringing of endorsements, but it does indicate that sublingual strips will probably help you sleep better than other products like CBD beverages or bed sheets.

What Science Says About CBD and Other Ingredients in Sleep Strips

While many Americans use CBD to help them sleep better, so far the research paints a somewhat mixed picture about its effectiveness.

In 2018, a review in the journal Frontiers in Immunology found that CBD could be helpful in treating sleep disorders, especially at higher doses. The review’s authors found that CBD promoted a healthy sleep cycle without the risk of major side effects.

On the other hand, a 2019 human study in The Permanente Journal found that CBD’s sleep-boosting effects were inconsistent, as participants slept better for the first month but reported mixed results after that. Interestingly, the study did find that CBD was consistently effective at reducing anxiety, which holds promise for people whose sleep problems are a byproduct of their worried minds.

The sleep-promoting powers of other ingredients in CBD sleep strips are also a matter of debate.

No clinical studies have investigated CBN as a sleep aid, though a report from cannabis science company Steep Hill labs found that 5 mg of CBN could be as effective as a 10 mg dose of diazepam.

As for 5-HTP, the Penn State Hershey Medical Center states that it may promote sleep due to its ability to raise serotonin levels in the brain. However, a 2008 study in the journal Sleep found that it had no major effects on mice’s ability to sleep.

Melatonin, despite its popularity, is also largely unproven as a sleep aid. In 2017, the American Academy of Sleep Medicine (AASM) released a set of guidelines discouraging the use of melatonin to treat insomnia, due to a lack of evidence of its safety and effectiveness.

So Are There Any Downsides to CBD Sleep Strips?

In the unlikely event that you suffer ill effects from CBD sleep strips, it probably won’t be due to the CBD itself. The World Health Organization (WHO) states that it has no significant side effects and no ability to produce dependence. However, contaminated CBD products are all too common in today’s unregulated market, so you’ll want to make sure your sleep strips have been tested by a third-party laboratory for purity and potency.

Melatonin is generally safe as well, at least for short-term use, according to the Mayo Clinic. However, it’s also been known to interfere with many types of drugs — including contraceptives, immunosuppressants, and diabetes medications — so it’s to check with your doctor before using any product containing it.

Aside from that, the biggest drawback to CBD sleep strips is their cost. A month’s supply can cost $100 and up, which is a hefty price for a product that may or may not get the job done.

In light of this, it’s worth echoing the advice of Johns Hopkins Medicine: If you have sleep issues, try making lifestyle changes first. But if steering clear of screens late at night and sleeping in a cool and dark place don’t get the job done, CBD sleep strips might be worth a try.