Why Resin Is the Key to Medical Cannabis Quality 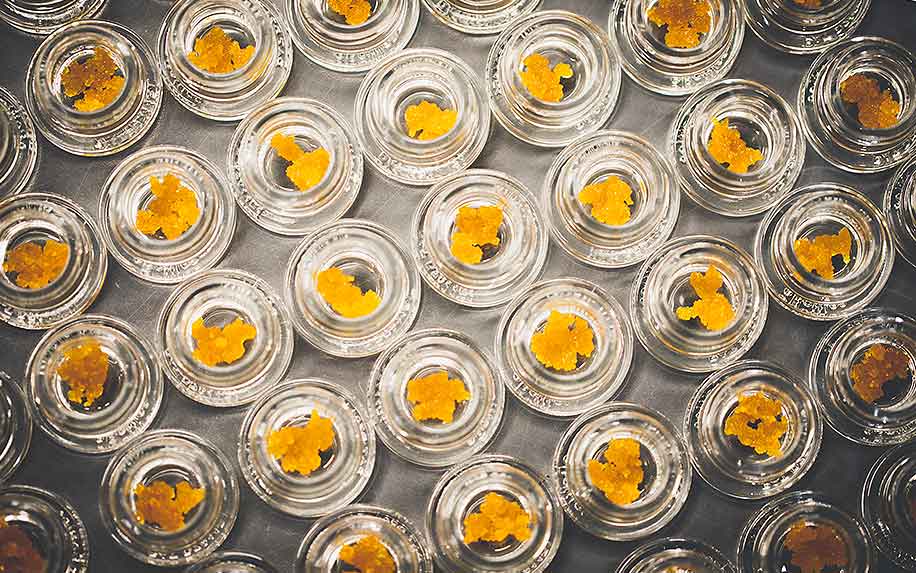 Resin is the source of cannabis’ most important medicinal compounds. Image Credit: By 420MediaCo on shutterstock.

If you’re a medical cannabis patient who prefers to consume the plant in its most minimally-processed form — commonly known as “flower” and smoked in a conventional joint or pipe — you may have noticed that your medication tends to be quite sticky to the touch when you first purchase it. Then, as the days go by, it gradually becomes drier and drier … and often, less effective at treating your pain, insomnia, or other conditions.

If you’re wondering why this happens, there’s a simple answer: your cannabis is losing its resin.

Cannabis, like many other plants such as pine trees, produces a viscous and fragrant substance as it grows. Known as resin, it’s found primarily in the flowers of the plant, though traces can also be found in the leaves and stem (but not in its seeds, which is why you should beware of any THC or CBD-infused product that claims to be made from “hemp seeds” or “cannabis sativa seeds”).

As the cannabis plant grows, this resin serves as a protective barrier against pests, infections, and UV light. It’s essential for the plant’s ability to reproduce — without it, predators might eat the flowers before they can produce seeds.

But resin is also essential for humans who want to take advantage of cannabis’ therapeutic benefits. Not only does it make smoking flower less harsh and irritating for the lungs, it’s also the source of cannabis’ most important medicinal compounds.

Resin Is Where You’ll Find Cannabinoids and Terpenes

Most people who use medical cannabis are seeking the benefits of its two most prevalent “ingredients,” which are the cannabinoids THC and CBD. These compounds, along with many others, found in the plant’s resin.

The former, known by the scientific name of tetrahydrocannabinol, is best known for its intoxicating effects (it’s the primary cause of cannabis’ famous, or infamous, high). However, despite decades of fear-mongering myths about THC, it has recently attracted attention from scientists for its many health benefits, such as reducing pain, restoring appetite, and relieving the intraocular pressure associated with glaucoma.

The medicinal properties of CBD, which goes by the scientific name of cannabidiol, have also come to the forefront of national consciousness in recent years. Researchers believe it could have potential for treating everything from anxiety to irritable bowel syndrome.

But THC and CBD aren’t the only beneficial cannabinoids found in resin — it also contains compounds like CBN (which scientists believe can help promote sleep) and CBC (which could help prevent fungal infections).

Aside from cannabinoids, resin also contains another class of highly beneficial compounds known as terpenes. These naturally occurring chemicals, which are found in many other plants like lavender or lemongrass, give cannabis its trademark smell — and a huge array of medical benefits. Some, like myrcene, can be useful for treating seizures and spasticity, while others, like linalool, have been found to have anti-anxiety or anti-inflammatory effects.

Medical cannabis that is rich in resin contains a higher percentage of these beneficial cannabinoids and terpenes, but like most medications, it can quickly lose its potency if stored incorrectly. When exposed to air, light, or excessive heat/cold, some compounds (like THC) degrade into other forms. There’s also a risk that your cannabis could begin to develop mold, which certainly won’t make it more therapeutic.

Fortunately, there are a number of easy and affordable ways to prevent your medical cannabis from becoming overly dry and losing its resin. Investing in an airtight jar or two is perhaps the most straightforward method, though vacuum sealing machines — like the ones used for food — can be even more effective when dealing with larger quantities. And in the event that your medication has already dried out, it can be restored to a semblance of its previous resinous state by adding a paper towel soaked in distilled jar to its container.

It still probably won’t be quite as effective as it was the day you bought it, but it’ll be much better for your lungs — and your medical condition.