Which States Have the Most Medical Cannabis Users? 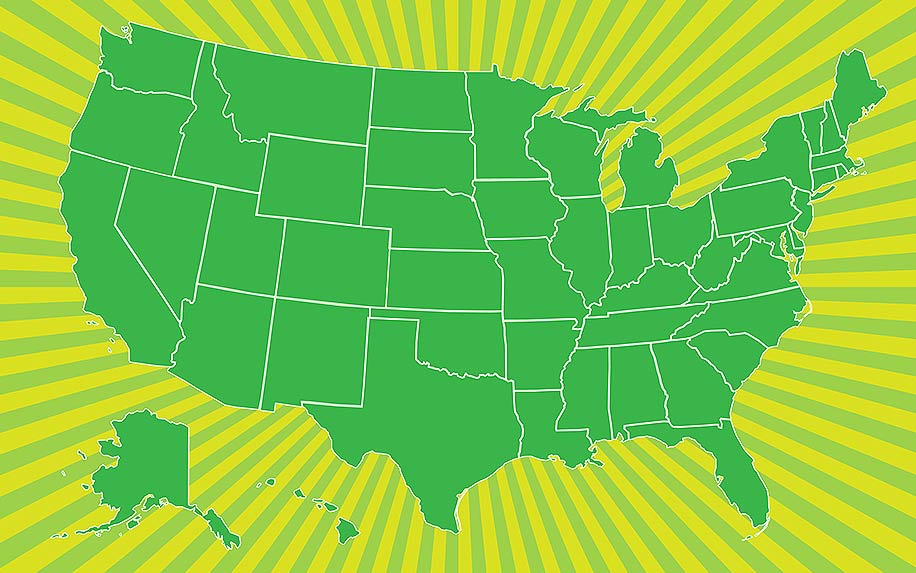 California is where medical cannabis is most popular in the U.S.. Image Credit: By leigh on shutterstock.

In the United States, medical marijuana is legal in a quickly-growing majority of states. But there are huge differences in availability — in Washington D.C., for example, it can be prescribed for “any debilitating condition recommended by a doctor,” while neighboring Maryland limits prescriptions to just seven conditions, three of which are related to weight loss.

As a result, just because a state has legal medical cannabis doesn’t mean that those who need it are able to get it. However, as awareness of the plant’s therapeutic benefits spreads, advocates are finding creative ways to make it more accessible to people who can benefit from it.

Take Missouri for instance — nine months after the Midwestern state voted to become the 33rd state with legal medical cannabis, doctors are proving slow to certify patients for the upcoming program. But rather than let this hamper the execution of a progressive ballot measure which passed with 65 percent of the vote, pop-up and specialty clinics are taking matters into their own hands and certifying patients for $200 or less.

In any state with legal medical cannabis (but especially those in traditionally conservative parts of the country), getting doctors on board with the program is essential for success. But it can also be a significant challenge. In Missouri, the state’s physicians’ lobby Missouri Medical Association opposed the 2018 initiative, though it’s now taking a less decisive stance on the legal regime. Nonetheless, it isn’t recommending the prescription of medical cannabis, and that combined with a lack of knowledge and lingering stigma among key decision makers is having a limiting effect.

This phenomenon isn’t unique to Missouri — states like Texas have also been criticized for their overly restrictive medical cannabis programs.

“I don’t think doctors are hostile,” Dan Viets, head of the Missouri Medical Cannabis Industry Association, told Insurance Journal. “But most doctors work for somebody other than their patients: a hospital or a clinic or some type of corporation, and in many cases it’s that corporation which is reluctant.”

As heartland states like Texas and Alabama take a more open-minded view on cannabis, many are hoping that change is in the air. For example, Missouri’s 2014 CBD-specific medical cannabis law has enrolled only 66 families to date, but medical cannabis advocates are pushing for a more successful outcome for the new law. Taking notes from states which have successfully implemented medical cannabis programs, clinicians like psychiatrist Zinia Thomas are making certification accessible through pop-up events where qualifying patients can get certified in a few short steps.

“We’re bringing it to them, in an environment where they’re comfortable and feel free as a patient, not a sort of illegal drug user,” she told Insurance Journal.

Here’s Where Medical Cannabis Is Most Popular

For inspiration, Missouri can look to Florida, which only enacted its medical cannabis law last year but currently has the third-highest number of registered patients across legalized states with 240,070 (1.13 percent of the population) according to the Marijuana Policy Project. And a recent court ruling should open the market even more, as it removed a cap on the number of dispensaries allowed, although an average of two had already been opening across the state each week. The number of registered users is growing by 10,000 a month.

Of course, it has a long way to go before it reaches the Golden State’s gold standard. In 1996, California became the first state to legalize medical cannabis in the U.S., and participation in the program has steadily grown over the years to where it now stands at 1,238,136 (3.44 percent — the second-highest percentage among legalized medical cannabis states).

But those numbers are expected to drop as the recreational-use infrastructure expands and the industry changes its focus to this larger market. Oregon’s struggling medical cannabis regime provides the starkest example, having lost two-thirds of its registered medical cannabis patients since full legalization.

Michigan is a distant second, with 284,088 registered patients, but that number signifies a drop from the 297,515 on the ledgers in December. Here it’s not the rising costs of Californian dispensaries or the diminished selection of Oregon that’s the problem, but rather the dominance of the black market. For now, caregivers are supplying most of the product, despite there being no legal mechanism that allows them to do so — data from May showed that 93 percent of the cannabis used by medical cannabis patients was illegally acquired, as reported by Mlive.

Third-place Florida experienced this on a smaller scale due to its restrictions on cannabis flower, which were recently overturned in March 2019. As dispensary owner Randy Maslow told the Tampa Bay Times, “That left a lot of people looking for cannabis on the black market, even though they are true medical patients. These patients are reluctant to change what they know works and a big part of the relief they’re getting is from the smoke.”

Arizona’s fourth-place medical cannabis program has dealt with the opposite issue — there, non-flower varieties of cannabis have been hard to come by. Still, this hasn’t put a damper on the program’s growth. It has enrolled 200,164 members (2.79 percent of the state’s population) since 2011, and the state’s Supreme Court just protected the local cannabis industry from prosecutors who argued that cannabis extracts are not covered under the definition of cannabis. Next up — a 2020 push for full legalization.

Rounding out the top five is Oklahoma with 146,381 patients (3.71 percent — the highest percentage nationwide) signed up in the first year of its medical cannabis program. Unlike nearly every other state, Oklahoma officials created no list of qualifying medical conditions, and no cap on the number of growers and dispensaries, which has contributed to its explosive growth.