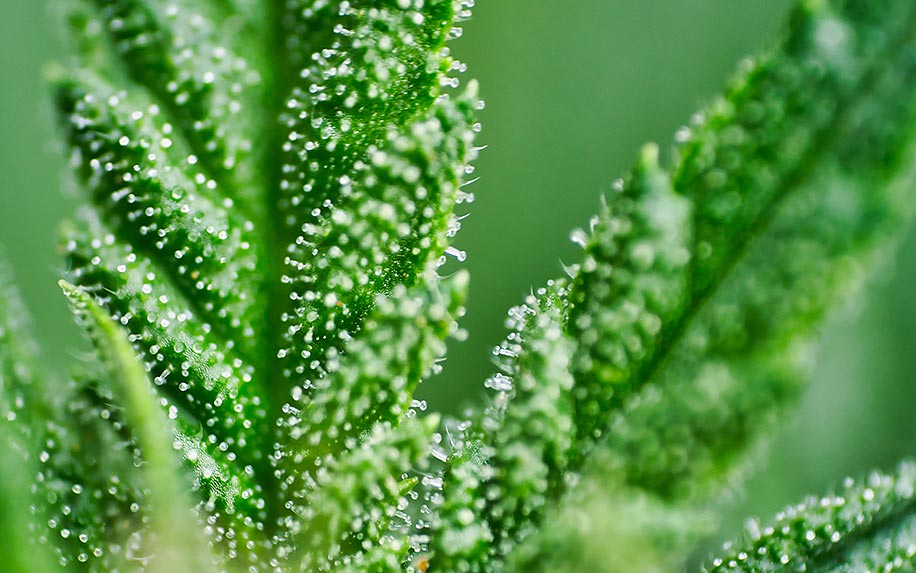 Trichomes are glands found all over cannabis plant. Image Credit: By Marco Weidner on shutterstock.

For medical cannabis users, choosing the right strain of flower can be a challenge. At times, the vocabulary alone can be intimidating: do they need a sativa (euphoric) or an indica (sedative)? Does the terpene profile matter (and if so, what’s the difference between terpenes like linalool or pinene)? Are “flavonoids” even a real thing? However, before considering these questions, there’s a simple eye test that can help users determine if a given batch of flower is likely to be worth the money: Is it covered in trichomes?

Trichomes are glands found all over cannabis flowers, leaves, and, to a lesser extent, the stalk. The word trichome comes from the Greek trichoma, meaning “growth of hair.” They produce the plant’s resin — which contains many of the most useful therapeutic compounds found in cannabis, from cannabinoids like THC to terpenes like eucalyptol to 20 different types of flavonoids (yes, they’re real, and they help determine a strain’s taste, smell, and color).

In the cannabis vernacular, trichomes are known as “crystals,” and experienced users know to look at them for signs of a plant’s potency. In the last several decades, trichome-rich strains have become increasingly prevalent as growers have fine-tuned their techniques to create stronger and stronger varieties of cannabis.

In appearance, trichomes resemble tiny mushrooms, with thin stems and bulbous heads. Plants of all kinds employ a variety of trichomes to fend off dangers, including insects, UV light, water evaporation, and temporary frosts.

Cannabis trichomes are no exception, acting as networks of defense against threats great and small. They can serve as a frontline defense against outbreaks of mold, and their resistance to harsh light and strong winds extends the plant’s growth range.

The smells, tastes, and psychoactive compounds they manufacture have an equally protective impact. Their strong aroma and bitter taste help ward off hungry ants, mites, caterpillars, and moths, as well as bigger animals.

What Medical Cannabis Users Should Know About Trichomes

People who are primarily interested in microdosing — using tiny amounts of cannabis to relieve mild symptoms without causing intoxication — have little need to concern themselves with trichomes. But medical cannabis patients who either A) grow their own plants, or B) are living with severe symptoms will find that having a basic understanding of trichomes to be invaluable getting the most out of their medicine.

First, it helps to differentiate between the different types of trichomes. In the cannabis plant, they come in three varieties and range from 10–100 microns in size (for reference, human hair has a width of 50 microns, and the naked eye cannot see anything smaller than 40 microns).

The largest and most numerous are the capitate-stalked trichomes which cover the buds — these contain the greatest concentration of cannabinoids, and they’re also the ones that most people refer to when talking about trichomes. Smaller are the capitate-sessile trichomes, still covering most of the plant (but with a lesser cannabinoid content). Bulbous trichomes are the smallest, sparsely populated on the surface of the plant and invisible without a microscope. As you might expect, they’re also the trichomes with the lowest content of therapeutic compounds.

In color, trichomes can range from pure translucence to milky-white cloudiness — and for some strains all the way to amber, if you wait till the end of the plant’s growing cycle.

This color change is brought about by the increased concentration of the cannabinoids, terpenoids, and flavonoids that the trichomes produce. Scientists used to think that these compounds were generated by the cannabis plant itself, but have since discovered that the plant’s trichomes are responsible for their presence. This may help explain why marijuana-derived CBD oil is generally more effective than the hemp-derived variety, since the latter is extracted mainly from the plant’s stalks and leaves, which have fewer trichomes (and thus fewer therapeutic compounds) than the flowers.

Growers often use the coloration of trichomes to determine if a plant is ready to harvest — although this can be tricky for amateurs since the technique is dependent upon knowing a strain’s trichome characteristics, as some don’t change to amber. If you’re growing your own medical cannabis, it’s worth asking a dispensary employee or a cannabis expert (many of whom can be contacted online, and are surprisingly responsive) to help explain what you should look for in your strains.

Even for medical cannabis users who aren’t growing their own plants, understanding the differences in trichome color can be useful. If the trichomes are amber or brown, they’ll give more of a body high when consumed, the kind typically associated with indica strains. These types of cannabis are best suited for those dealing with conditions like insomnia or pain. When they are cloudy or milky in color, they will give more of the heady and energetic buzz typically associated with sativas — which can be helpful for those seeking to boost their energy or mood, according to a 2014 study published in the Journal of Alternative and Complementary Medicine.

Understanding trichomes is also important for users of extracts and concentrates, since in some cases it may be possible to get similar effects without having to fork over quite so much cash. When professional cannabis producers make these products, they use methods that vary from Moroccan-style sieving of plant material and then pressing — the ancient method of making hash — to butane hash oil extractions, which draw out the essential oils of the trichomes into cannabis wax. While some of these techniques can be complicated or dangerous (trying the latter at home is an especially bad idea), there’s a much easier DIY method available.

For medical cannabis patients, taking advantage of trichomes can be as simple as using a “kief catcher” in a cannabis grinder, saving all the resinous dust, or kief, that is torn from the bud to be sprinkled onto a joint or pipe. This will intensify the effects of the cannabis you smoke, allowing you to use smaller quantities (and save a considerable amount of money, since concentrates are much more expensive than traditional flower). You’ll likely need to experiment a few times before you find the amount of trichome-rich kief that works for you, but if you choose a strain that’s rich in trichomes to begin with, you’ll have plenty of raw material to work with — and the results could be beneficial for both your health condition and your wallet.