The Argument Against: Cannabis Shatter 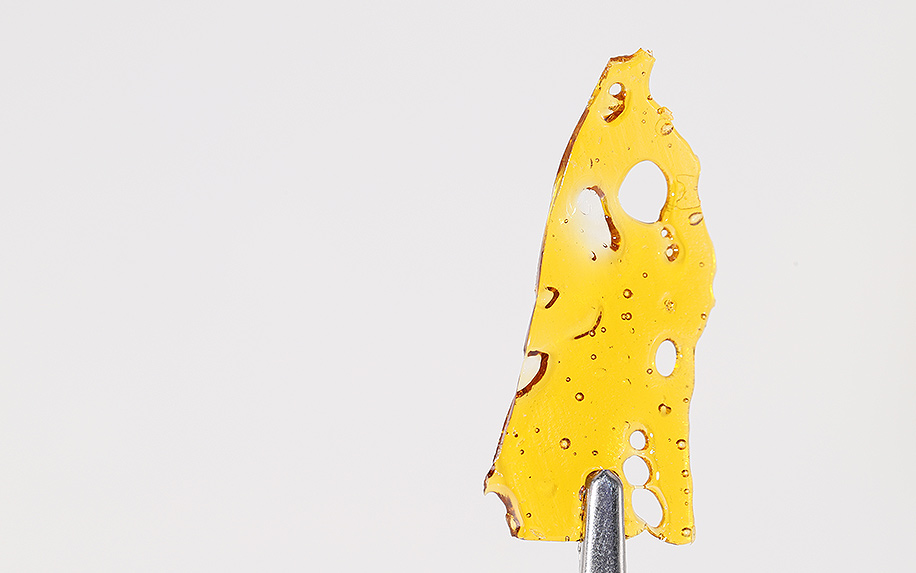 Shatter belongs to a class of cannabis derivatives known as concentrates. Image Credit: By 420MediaCo on shutterstock.

For medical cannabis users, the variety of safe and effective ways to use the plant has never been greater. Those who prefer to avoid the smell (and the potential damage to their lungs) may opt for topicals or sublingual tinctures, while those who want precise control over their dosage can choose from a variety of capsules or gummies — both with THC and without it.

But there’s one recent innovation they’d be wise to avoid: cannabis shatter.

Shatter belongs to a class of cannabis derivatives known as concentrates, of which the most well known may be vape oils. As the name suggests, concentrates contain a higher percentage of the primary components of cannabis (i.e. cannabinoids like THC and CBD). Shatter is a particularly potent concentrate — its cannabinoid content tends to be between 80-99 percent, compared to around 5-18 percent in a typical joint.

Like all concentrates, shatter is produced by extracting the resin (which is the richest source of cannabinoids) from cannabis flower using a solvent. Often, a chemical such as propane or butane is used as a solvent, though carbon dioxide and other, potentially safer solvents are starting to become more prevalent.

Yet no matter how it’s extracted, it still comes with a number of significant red flags.

The Problems With Cannabis Shatter

The first issue with cannabis shatter is the amount of sophisticated (and frankly, somewhat dangerous) equipment it requires. It’s generally used with a device called a “rig,” a tall glass apparatus that resembles a traditional water pipe. That’s where the similarities to conventional methods of cannabis use end — instead of a normal lighter, users need a blowtorch to get the rig hot enough to melt the shatter and release its vapor.

Aside from the obvious fire hazard and the steep learning curve for using a rig properly, there’s also the cost to consider. Even the cheapest rigs cost around $100, and the price of a decent-quality product tends to be two or three times that amount.

Cannabis shatter itself is also expensive, with a single gram costing around $60 at most dispensaries. By comparison, a gram of cannabis flower usually costs less than $10. There’s typically a much narrower range of options, as well, meaning that medical cannabis patients who have specific needs (for example, an indica-heavy strain to help with sleeping issues) may have difficulty finding a variety that works for them.

But the biggest reason for being skeptical about cannabis shatter is that it’s simply too strong. In fact, even some places where cannabis is legal have outlawed its sale — shatter is one of the forms of cannabis still outlawed in Canada, where the plant is nationally legal, and states like Arizona and New York, which both have medical cannabis programs.

As Matthew Young, a senior research and policy analyst at the Canadian Centre on Substance Abuse, told CBC News, “It’s the highly variable [THC] concentration that you see where a lot of people get into dangers. They don’t really know how much they’re taking. Without knowing how much they’re taking, they don’t necessarily know the effects it’s going to have on their mind and body.”

And because of the delivery method, those effects are almost instantaneous — shatter is more bioavailable than other forms of cannabis, meaning the body can process it in seconds. In the words of one user who shared their experience with WABC-TV, an ABC affiliate in New York, “In the snap of a finger I went from not high to being 100 percent high.”

Even for experienced cannabis users, this can be a startling and unpleasant experience — and for novices, the combination of extra-potent cannabinoid content and rapid onset is likely to trigger some of cannabis’ most notorious side effects, such as paranoia and anxiety.

It’s important not to overstate the dangers of cannabis shatter — even law enforcement officials like Mark Page, director of an anti-drug enforcement group in Illinois, have warned against inflating the potential risks. Still, as he told VICE News, “[Cannabis shatter is] very strong compared to smoking marijuana or smoking a joint.” And while he was skeptical that it could lead to fatal consequences, he was also upfront about the downsides.

“You don’t see overdoses from marijuana. They’re extremely rare, it almost never happens, but I imagine there’s a higher potential for that to happen along with hallucinations and other types of psychosis.”

For medical cannabis users with many other, consumer-friendly options at their fingertips, this outcome can be best (and easily) avoided by steering clear of cannabis shatter altogether.