How Long Does THC Stay In Your Saliva? 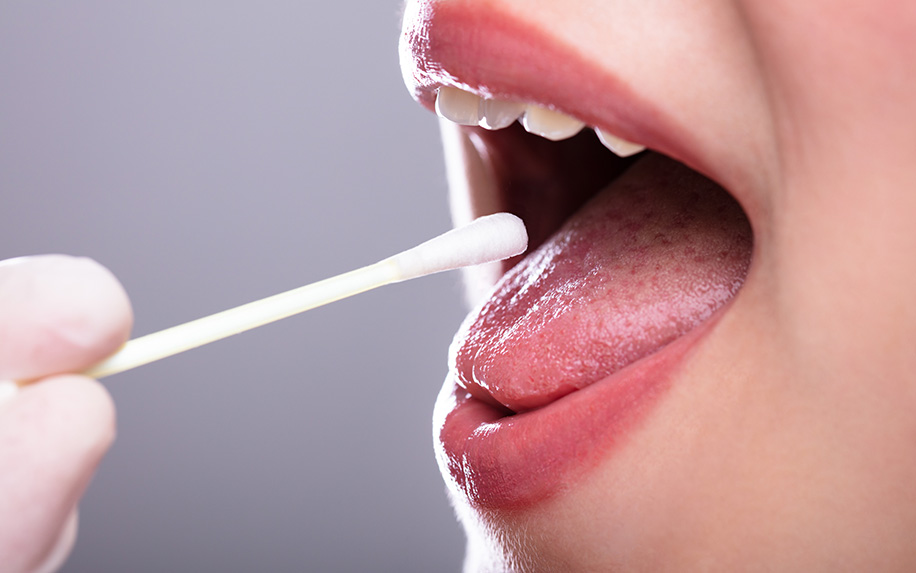 Drug tests for cannabis come in a variety of forms, each of which has some significant issues. Blood tests are invasive, urine tests are (relatively) easily fooled, and hair tests are prone to environmental contamination. Oral fluid tests, commonly known as saliva tests, sidestep all of these issues — and as a result, they might represent the future of cannabis drug tests.

Oral fluid testing is quickly becoming a new standard for roadside drug tests, due to its noninvasive and practical nature. Unlike blood testing — another test that measures the recent ingestion of THC — oral fluid testing can be carried out quickly. This is a crucial factor in testing for THC, as its concentration in blood can diminish by 90 percent over the 90 minutes usually required to get a sample to a testing facility.

More workplaces are also implementing oral fluid tests. As Dr. Marilyn Huestis, a world-renowned expert on human drug testing and former Chief of Chemistry and Drug Metabolism at the National Institute of Drug Abuse (NIDA) Intramural Research Program, told cannabisMD in a phone interview, “The oral fluid test has a lot to offer in terms of drug testing, because it is an observed collection, one which the donor and the collector really prefer. The donor because it’s not embarrassing, the employer because they only have to have one collector on the site.”

However, despite their advantages over other forms of cannabis drug tests, oral fluid tests are not without issues of their own. For example, Canada’s new oral fluid testing tech, the $6,000 Dräger Drug Test 5000, came under fire in a recent Global News interview with Vancouver law firm Acumen. The firm tested the device’s sensitivity with a variety of substances, triggering various false positives.

One came about 30 minutes after a test subject ingested a low-THC CBD oil, which caused the person to test positive for cannabis. The device should not detect CBD at all, and the small amounts of THC that are legally allowed in CBD oil are not supposed to trigger a positive test result either. (Another false positive occurred when a test subject drank a cup of legal coca tea, and later tested positive for cocaine.)

The Dräger’s basic issue, according to the story, is that its actual threshold for detecting THC is lower than it should be by law. A cannabis user is considered to be too impaired to drive by Canadian law if the level of THC in their blood is two nanograms (ng) of THC per milliliter (ml) of blood. The Dräger will deliver a positive result for THC above a cutoff of 25 ng of THC per ml of oral fluid — although it won’t show the exact concentration above this threshold.

However, there is no correlation between THC levels in oral fluid and blood, and no correlation between these levels and impairment. And since the device can yield positive results triggered by the (miniscule) legal levels of THC allowed in CBD oil, its use is likely to be challenged in future court cases — which is one reason some law enforcement agencies, like the Vancouver police department, have declined to use it.

What Do THC Oral Fluid Tests Check For?

This is where oral fluid tests distinguish themselves. Unlike hair and urine tests, oral fluid tests look for the actual THC ingested, not its metabolites which can linger in the body for far longer. In this way, it provides better proof of recent ingestion of cannabis — and even if a positive test can’t accurately determine impairment, it can trigger legal penalties.

When people ingest cannabis, THC coats the inside of their mouths. It also circulates in their oral fluid, making it so even edible cannabis products show up in testing.

Before testing, subjects shouldn’t eat or drink anything for 10 minutes — which is close to the amount of time required for the field sobriety tests that usually precede it on roadside stops.

The detection window can close in as little as two hours or as long as a week, although three days is a more realistic limit.

Barry Cooper, a former drug enforcement agent who now works in “freedom activism” through his website NeverGetBusted.com, believes that these tests are beatable. He told cannabisMD that beating them comes down to good oral hygiene and use of a special mouthwash.

“They love to jam the cotton swab in all the little corners of your mouth so having good oral hygiene prior to testing is very important,” Cooper said. “Make sure to brush your whole mouth. During aggressive saliva drug testing, plaque can cover some toxins only to break free at the last second. Brush your teeth well, but not too hard. Over-scrubbing before a possible test could cause you to bleed and allow more toxins in your saliva.”

His pick for beating an oral fluid test is Toxin Rid Rescue Wash. “It takes a special mouthwash to beat the saliva test,” he said. “Regular mouthwash won’t help you succeed and the alcohol contained in most rinses can cause you to fail.”

However, not all experts agree with Cooper. Huestis, for one, says that good oral fluid tests are hard to compromise. “So far we have not seen a successful way [to change the test results], where we know with urine there are many products and ways to do it,” she said. “When I was at NIDA … we heard of one person in a workplace scenario who tried to spray hairspray all over his mouth to coat his oral mucosa, the inside of his mouth. That was a horrible thing they went through. So that did not work.”

“A 10-minute waiting period, checking the mouth and the fact that it’s observed — so far [it doesn’t] have any [weaknesses] that we know of.”