Here’s How to Tell If Your Cannabis Has Mold 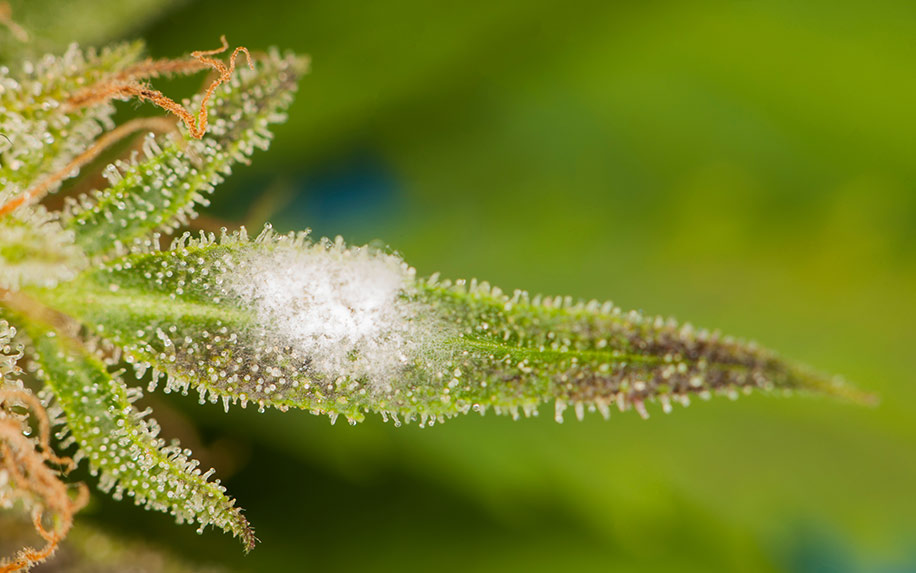 Mold in cannabis is a bigger problem than you might imagine. Image Credit: By ElRoi on shutterstock.

After legalization, moldy cannabis was supposed to be a thing of the past. A robust infrastructure of legal recreational and medical cannabis suppliers — and an efficient regulatory system — was supposed to ensure consumers that they’d never be stuck with a bag of spoiled product again. The legal cannabis industry said that the promise of guaranteed quality would lure people away from the black market — but so far, they haven’t been able to hold up their side of the bargain.

In California, home to the most cannabis users in America, almost 20 percent of cannabis products have failed quality control checks since they were instituted last July. This isn’t an isolated incident: an exposé on the shortfalls of self-regulation in Vermont’s largest medical marijuana dispensary revealed how common contaminated cannabis can be, and reinforced the need for consumers to be more aware of the signs of mold.

To learn how to tell if your cannabis has mold, it pays to understand how the plants are exposed to mold spores in the first place.

The Most Troublesome Cannabis Molds

There are nearly 90 different fungi which can affect cannabis, but some types are more prevalent than others. The most insidious forms take root during the growing stages, where the main culprits are poor plant hygiene and uncontrolled environmental conditions like temperature, humidity, and air circulation.

Botrytis — aka, gray mold or “bud rot” — is one of the most common molds that affects the cannabis plant. It is a necrotic process which can affect the cannabis bud, roots, stems, and leaves, and will give them a gray, lifeless appearance. Without proper care, it will spread fast and kill affected plants within days.

Like many other molds, botrytis thrives on high humidity and poor ventilation. It occurs during the flowering stage of the plant.

Powdery mildew is another common mold caused by high humidity — in this case, a minimum temperature of 70 degrees Fahrenheit helps it flourish, as do sudden changes in temperature. At first, it will appear as a light coat of white dust toward the top of the plant. As the infection progresses, it will move downward to envelop the entire plant.

Fusarium is the blanket term for a wide range of fungi which live in the soil. By corrupting the stems through a rigidifying process called lignification, they block sap flow in the plant, which causes rotting at the stem base, stains on the oldest leaves, and a loss of natural coloration. Unlike other molds there is no treatment for fusarium infection.

Aspergillus is one of the deadliest forms of mold found in cannabis, having been implicated in the deaths of two medical marijuana patients through its inhalation. While aspergillus is a common fungus, so small as to be undetectable and usually harmless, it poses a risk to individuals with compromised immune systems.

Signs Your Cannabis Has Mold

While knowledge of different kinds of mold is helpful from a growing perspective, consumers need only recognize signs that their cannabis is moldy from any form of fungus. It’s not just a matter of being picky or squeamish: smoking moldy cannabis can lead to side effects including allergic reaction and lung infection. To avoid this, it’s worth investing in an airtight container to keep your cannabis cool and dry.

The best way to test cannabis for mold is by leaving it to the lab, making sure that samples are tested for aspergillus, which is sometimes overlooked. It’s less feasible to conduct tests at home, but your own senses should be enough to prevent accidental mold consumption.

First, look at your cannabis, with a magnifying glass if necessary. Natural trichomes (the “hairs” of a cannabis bud or leaf) are transparent or milky-white with a mushroom-like shape, while cannabis mold looks furry or dusty, resembling the kind of mold you find on bread or fruit.

Smell is another easy giveaway. The terpenes in cannabis give it a unique aroma, chemically similar to the aromas of spice, pepper, citrus, pine, or fruit depending on the strain. If your cannabis smells like wet socks instead,  give it a pass.

You can even use touch and hearing to detect moldy cannabis. When buds are correctly dried and cured, they will make a crisp snapping sound when you pull them apart. If a bud feels damp and makes no sound at all when you break it apart it may have been improperly dried, which poses an increased risk of mold growth.