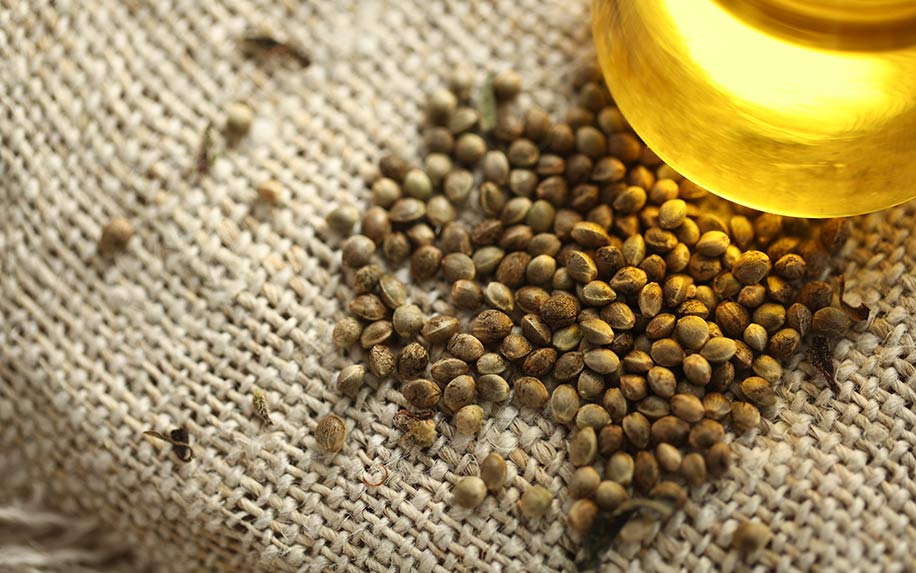 Hemp seed oil has no psychoactive effects since it comes from the hemp plant. It does not continue cannabinoids. Image Credit: By ElRoi on shutterstock

Today, CBD oil is almost literally everywhere. CBD-infused foods are the biggest gastronomic trend of the year, CBD beauty products are taking over store shelves, and CBD yoga classes are now officially a thing. But CBD oil isn’t the only one enjoying a surge of popularity: hemp seed oil is riding the coattails of its younger, cooler relative, with a recent spike in interest (and sales).

However, this may have less to do with hemp seed oil’s actual benefits — which are considerable — and more to do with confusion between it and CBD. Unscrupulous brands have stoked this confusion by intentionally mislabeling products and conflating the qualities of CBD and hemp seeds.

Both CBD oil and hemp seed oil do have a lot to offer, but what they offer is quite different. Here’s a quick guide to understanding the differences between these two commonly misunderstood products.

What Is Hemp Seed Oil Actually?

Like most CBD oils, hemp seed oil is derived from (surprise) the hemp plant and has no psychoactive effects. However, unlike CBD oil, it’s extracted solely from the plant’s seeds, which contain no cannabinoids such as CBD or THC. That’s why you should avoid any CBD product that claims to be made from hemp seeds.

But back to hemp seed oil for a moment. While it doesn’t have any CBD or THC, hemp seed oil is otherwise a nutritional powerhouse — and one that can legally be added to food and beverages. The oil extract boasts more essential fatty acids than any other nut or seed oil, as well as all nine of the essential amino acids, which the human body needs to survive (but can’t produce on its own). Hemp seed oil is also an excellent source of lean protein, with a 1:3 ratio of omega-3 to omega-6 fatty acids, which many health and wellness professionals find to be as close to ideal as possible.

Though the cannabis reform movement has been a boon to hemp seed oil, this can’t quite be called a comeback — hemp seed oil has been here for years, and it’s never endured the same prohibition as CBD did (and still does, as evidenced by the recent crackdown on CBD edibles). It has long been sold in health stores and specialty food aisles, and even longer still as bird seed.

When the 1937 Marihuana Tax Act was being debated, several industries were asked to testify before the Federal Board of Narcotics as to their needs from the cannabis plant. The bird seed industry was one of only a few to have won an exception in the age of cannabis prohibition, and the United States has allowed the import of sterilized seeds of the hemp plant ever since. Thanks to the 2018 Farm Bill, which legalized the domestic production of industrial hemp, these can now be cultivated by American farmers as well.

Back when hemp seed oil was the only hemp-related oil widely available, identifying it was easier. Before the CBD boom, anything called “hemp oil” was actually hemp seed oil. Now, the market is much more crowded, and the brand of hemp seed oil has fallen so far it is sometimes deceptively called “cannabis sativa oil.”

While it’s certainly misleading, technically it isn’t exactly untrue — the cannabis sativa genus of plants does include both hemp and marijuana.

CBD oil can be derived from both, but the majority of oil you see in pharmacies and supermarkets comes from hemp. Due to federal regulations it’s typically extracted from the stalk of the hemp plant, though other parts of the plant like its flowers and leaves are much richer in CBD. It can vary in color from dark green to brown or black.

Hemp seed oil, as you might expect, is only extracted from the hemp plant, usually by cold pressing the husked seeds. The unrefined oil is green-colored and preserves all the nutritional content of the seeds, which contain about 30 percent oil by weight.

The main difference between the two is a simple one: hemp seed oil contains no CBD, because hemp seeds themselves contain no CBD. As a result, hemp seed oil won’t help reduce anxiety like CBD oil, nor will it reduce psychosis symptoms or help treat epilepsy.

That doesn’t mean it’s entirely useless, though. In fact, hemp seed oil does have benefits that CBD oil doesn’t have, such as the aforementioned essential fatty acids and lean protein.

The Shared Benefits of Hemp Seed Oil and CBD Oil

It can be helpful to imagine the two oils as the circles of a Venn diagram — each has its distinct properties, with a bit of overlap in the middle.

Both extracts share anti-inflammatory properties, although they produce them in different ways. CBD has been shown to trigger an immunosuppressive function by interacting with the endocannabinoid system, a network of receptors that regulate inflammation and immunity. This can lessen oxidative stress, which can lead to organ damage and contribute to diseases like Alzheimer’s disease, arthritis, hypertension, diabetes and atherosclerosis.

According to Cathleen Crichton-Stuart from Medical News Today, hemp seed oil’s anti-inflammatory health benefits come from the high levels of fatty acids, plant sterols, and alcohols it contains. These effects have been shown to contribute to the mitigation of arthritis pain, protection against heart disease, and the prevention of some forms of cancer.

Speaking of cancer, CBD products have also been shown to have anticancer properties. One test-tube study found that concentrated CBD induced cell death in human breast cancer cells, while another in mice showed that CBD inhibited the spread of breast cancer cells.

Some of the best-studied effects of CBD involve its potential as a natural arthritis remedy. It helps reduce the pain and inflammation caused by osteoarthritis in animals, and a good amount of anecdotal evidence suggests that it is similarly effective in humans.

Likewise, other studies (Chiropractic Economics) show that hemp seed oil can also be a godsend for people with arthritis, thanks to its rich content of omega-3 fatty acids. It’s also been shown to have an anti-rheumatoid effect on one type of cell associated with rheumatoid arthritis.

How They Help Your Skin

CBD’s anti-inflammatory properties may also help to reduce the causes of acne, specifically the overproduction of a secretion made by sebaceous glands in the skin. Thanks to its ability to neutralize free radicals, CBD could even help remove acne scars.

According to Ana Gotter, from Healthline, hemp seed oil also has many benefits for skin care, helping to heal skin conditions such as eczema, psoriasis and other rashes. Unlike many other oils, it won’t stick to skin and clog pores. It’s similar to the body’s natural lipids, making it able to penetrate cells to deeply moisturize without leaving a greasy residue.

In fact, hemp seed oil is such a potent moisturizer that it also has a storied reputation for varnishing woodwork. It used to be commonly used for this purpose up until the 20th century, and is still a good substitute for petroleum-based products.

The Final Verdict on Hemp Seed Oil vs. CBD Oil

One of the most common reasons people give for using CBD oil is its ability to reduce anxiety. If this is what you’re after, steer clear of hemp seed oil — it simply won’t work.

On the other hand, if you’re looking for a tasty, versatile superplant to add to your diet and/or beauty routine, hemp seed oil could be a perfectly fine option.

Now that you (hopefully) understand the difference between the two, you’ll find it much easier to make an informed choice when you go to the store. Just remember to be extremely skeptical of any CBD product that claims to be made from hemp seeds.