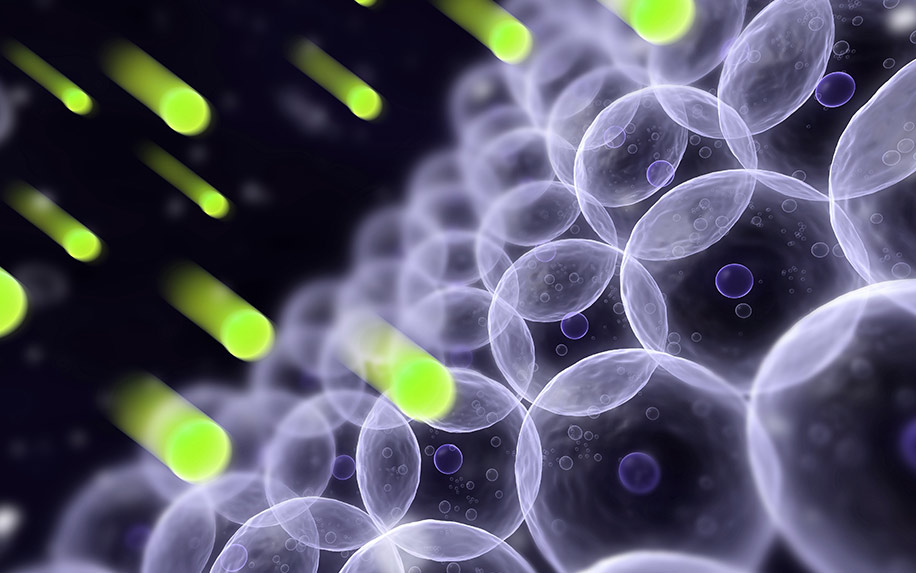 Cannabinoids in cannabis can help combat the negative effects of free radicals. Image Credit: By Sebastian Kaulitzki on shutterstock.

You’ve likely heard of free radicals being bad for the body and advancing the aging process, and even, perhaps, of the notion that cannabis can help keep them in check. The science of free radicals and what they can do is known on a general level, but researchers continue to put them under the microscope (literally and figuratively) to better understand what they really do to the body — and how to avert it.

Based on what’s known to date, here’s a primer on free radicals and the part that cannabinoids in cannabis play in helping combat the ravaging they do to our cells.

An Introduction to Free Radicals

In simplistic terms, our body’s cells are made up of paired electrons that help our cells form, grow, and stay healthy. But when oxygen in the body splits into individual molecules with single, unpaired electrons, they can run rampant as “free radicals,” causing damage to our cells, our DNA, and the proteins our body needs to thrive. Research shows that free radicals play a significant part in contributing to human diseases including cancer, Parkinson’s, Alzheimer’s, and atherosclerosis, which are caused when rogue free radicals cause the buildup of fatty plaque in our arteries.

Because single oxygen atoms with unpaired electrons are the main culprit, this means our bodies are under constant attack from free radicals, a process known as oxidative stress — which you may have heard about in the context of aging. Oxidative stress is the result of gradual accumulation of free radical damage that ravages and ages our bodies over time. And they don’t come only from oxygen in the air we breathe, but from other substances that produce free radicals in our system, including pollutants and pesticides in our food and water, ingredients in medications, and tobacco smoke or alcohol.

A Chain Reaction of Destruction

To complicate the destructive process, single free radicals don’t work alone — rather, they cause a chain reaction. This happens because when one free radical steals an electron from a molecule, it then turns that unstable molecule into a free radical, which then goes looking for an electron to steal from another molecule, and so on.

According to the Harvard School of Public Health, this can cause cell membranes to break — altering the movement of substances in and out of the cell — with the result of this chain reaction ultimately leading to whole molecules and cells being damaged. This can lead to the growth of tumors as they mutate and even alter the structure of our DNA. In fact, it’s this damage to our DNA that is thought to advance aging processes.

While science is still unclear on the symptoms of oxidative stress, some experts believe it contributes to a weakened immune system, memory loss, brain fog, wrinkles, gray hair, vision issues, and joint and muscle pain, as well as headaches and general fatigue.

The Necessary Side of Free Radicals

This all sounds rather dire, but some free radicals also serve a positive purpose, since they’re created as byproducts from necessary natural chemical processes in the body, including metabolism. These, too, can build up and damage cells. But these free radicals are essential to life. Not only are they key in helping to remove waste and turn food and oxygen into chemical energy that we depend on to survive, they also float around in our veins and devour foreign invaders, which makes them important for a strong immune system.

Antioxidants are the nemesis of free radicals, and have been shown to manage them and fight their effects by cleaning up waste products in our cells. This is why antioxidants are high on the ingredient lists of many anti-aging beauty products and supplements. Natural antioxidants include phytonutrients, such as lutein, vitamin C and vitamin E, resveratrol , lycopene, and carotenoids such as beta-carotene. These are found in plentiful amounts in fruit and vegetables — especially bright or deep-colored ones like cranberries, blueberries, spinach, tomatoes, and broccoli. Whole grains, nuts, and green tea are also great sources of antioxidants. However, recently a new antioxidant has risen to prominence: CBD. In a matter of months, it’s become the hottest anti-aging ingredient on the market.

The well-known (or at least well-marketed) benefits of CBD oil for anti-aging are due to its status as an antioxidant. Scientific studies have found it to be so effective that the US federal government took out a patent on its antioxidant abilities, with special emphasis given to its ability to fight “age-related, inflammatory, and autoimmune diseases.”

CBD isn’t the only cannabis derivative showing promise as an anti-aging ingredient: experts are also now starting to look at other natural compounds in the cannabis plant for their potential antioxidative effects. The UK’s Royal Society—a fellowship of the world’s most eminent scientists and the oldest scientific academy in continuous existence—published an overview of the relationship between the endocannabinoid system (ECS) and reactive oxygen species (ROS), otherwise known as free radicals.

In layman’s terms, The Royal Society’s report pointed out that rather than being arch enemies, free radicals and antioxidant cannabinoids engage in a complex and ongoing “crosstalk” dance to continuously make delicate adjustments for keeping homeostasis (the stable equilibrium between physiological processes in our body) — ensuring that healthy cells stay healthy and damaged cells die before they can cause critical harm such as becoming cancerous, creating tumors, or causing diseases to take hold.

So while cannabis might not eliminate free radicals entirely, that’s not a bad thing — and it certainly shouldn’t keep you from running out to get a CBD face mask or a cannabis serum to keep the wrinkles at bay.